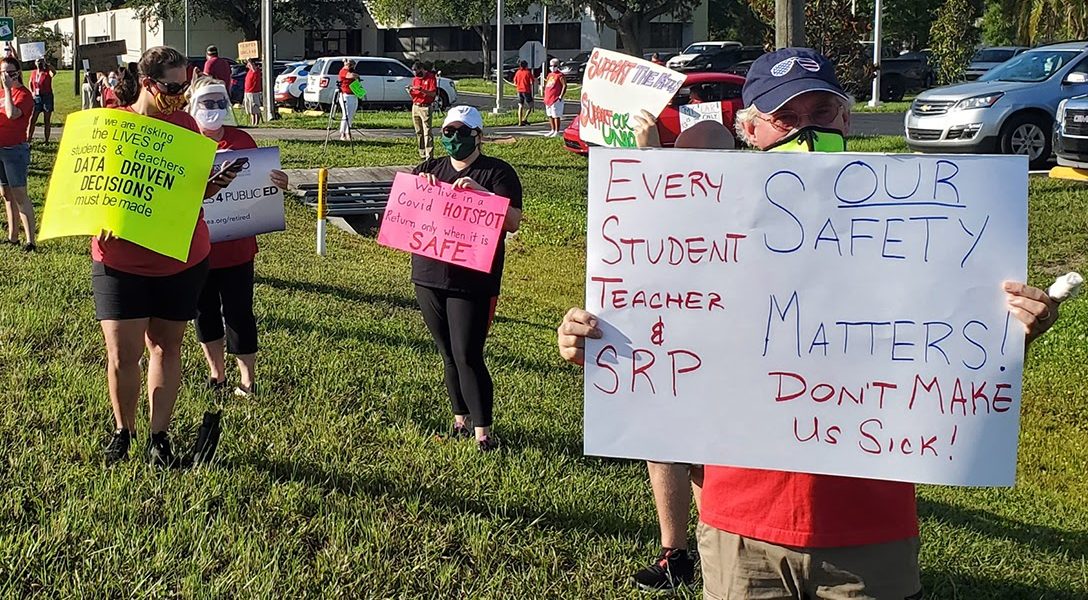 Months after Florida fully opened its school districts, Miami-Dade has finally put a COVID-19 testing program in place. But it stands alone in the Sunshine State as a surge in coronavirus infections has made Florida only the third state in the country to surpass 1 million cases.

The program will operate in conjunction with the University of Miami to provide free rapid tests to all students.

Miami-Dade County began a staggered return for its student body of more than 345,000 in October, becoming one of the largest school districts in the country to reopen for in-person learning. Miami-Dade implemented COVID-19 regulations and guidelines for students, teachers, and administrators, such as mask mandates. But the school district, which is the fourth largest in the nation, has already seen 1,354 positive cases since its reopening on October 5 — with 945 of them occurring in the past month.

Nonetheless, Republican Gov. Ron DeSantis has doubled down on his opposition to coronavirus restrictions and mask mandates. Appearing at an elementary school in Osceola County, south of Orlando, the governor said Monday that those measures remain “totally off the table.” And Florida educators say it’s the governor’s lack of leadership and the lack of COVID-19 regulations outside of schools that is putting their lives at risk.

“I think that one of the major things is Gov. DeSantis not doing a mask mandate. … That’s really led a lot of people to bring down their guard,” said Karla Hernandez-Mats, president of United Teachers of Dade. She said that the breakouts that have happened in Miami schools were caused by students or parents taking part in risky behavior outside the schools, such as going maskless in group settings.

COVID-19 cases in Florida have been rising steadily since October 1 — with a daily average of 9,266 cases in the past week and a 9.12 percent positivity rate as of December 1.

“I think that [the lack of regulations] has not been helpful in making sure that the message [is about] committing to controlling the spread of COVID,” Hernandez-Mats said. “The message has been more of, ‘How do we get back to normal?’ And, right now, we can’t get back to normal if we don’t have this first under control.”

Even test reporting has been an issue. Coronavirus testing in Florida is managed through multiple channels, including state, local, and private providers. The results are then passed on to those tested, as well as to the Florida Department of Health.

But the state health department only provides school districts with information on the number of infected students as infrequently as once per week. It also doesn’t provide specifics on who the infected students are, what classrooms they frequented, or even what school they attend. For schools, parents, students, and teachers trying to protect themselves and their close contacts, the lack of transparency can be dangerous.

“We have not gotten adequate information from the Department of Health on what’s happening in our schools,” said Andrew Spar, the president of the Florida Education Association (FEA), the state-wide teachers union. “That’s all in line with this notion of continuing to press to open schools and to create a narrative that everything is fine. … Until there’s a massive outbreak, that’s what they’re going to continue to do, to make it seem like everything is fine.”

Most Florida schools have already had to send entire classrooms into quarantine due to COVID-19 outbreaks.

At most schools, including Miami-Dade’s George Washington Carver Middle School, students have been expected to self-report any positive test results to the school administration. The administration then uses that information to compile a list of other students or faculty who must now quarantine due to contact-tracing protocol. Lastly, the school sends an email to parents and teachers announcing which students must go home. Currently, about 170 students at George Washington Carver are in quarantine, though Vazquez remains adamant that the school’s administration is doing “everything right” in terms of isolating positive cases.

With the new plan in Miami, additional steps will now be taken so that parents and teachers are notified as soon as possible about cases in their schools. The plan also calls for a parent handbook on how to handle COVID-19 and a review of procedures on how schools can better handle case identification, notification, quarantine, and testing.

“We have leaders that say the only thing that matters right now is the economy. But the economy is not going to work if you have half of your economy sick. Children aren’t going to learn if they’re sick, and aren’t going to be happy if one of their family members passes away because of COVID.” — Karla Fernandez-Mats, United Teachers of Dade President

The vast majority of Florida’s other school districts have been open since August 31. DeSantis threatened schools that they would lose state funding if they shut their doors. Though the decision to open school districts is technically up to the counties, the risk of losing critical funding meant that schools were forced to open anyway. This sent school officials scrambling to come up with plans to reopen while keeping students, teachers and their families safe with little direction from the governor or the Florida Department of Health. Schools developed their own contingency plans for what to do when students, teachers, or staff got sick, and raised their own funds for cleaning supplies and PPE.

Hernandez-Mats said that no school had a pandemic budget, and, without aid from the state or federal government, the only funds to take on these costs came from the Coronavirus Aid Relief and Economic Security Act (CARES Act) passed in March. Under CARES, the Miami-Dade school district was allocated $119 million, but that wasn’t enough to supply the schools with basic necessities as the pandemic has continued.

“We have leaders [in the state and federal government] that say the only thing that matters right now is the economy,” said Hernandez-Mats. “But the economy is not going to work if you have half of your economy sick. And, you know, children aren’t going to learn if they’re sick, and children aren’t going to be happy if one of their family members passes away because of COVID, and it’s just so many things that it’s a domino effect.”

According to Spar, unions had asked DeSantis to convene a committee of educators, parents, health experts and mental health experts to inform crucial decisions related to reopening. The governor refused, and, when the union convened the panel and made a reopening plan, the state disregarded it. Spar described the state’s approach as akin to putting “their heads in the sand” and ignoring the pandemic.

On the classroom level, even in Miami-Dade, teachers were left without formal guidelines until now. “If I have a student who becomes ill, what’s the protocol going to be?” inquired Erin Caputo, a fourth grade teacher at Sunset Elementary in Miami-Dade. “Are we going to shut down the whole classroom? Do we shut down the school? Do we wait for their test to come back?”

“If someone has COVID, you want to isolate that person, you want to quarantine anyone who may have come in contact with them. So this way if you have a situation where there’s an outbreak, it’s not going to spread,” said Spar, describing the need for regular testing in schools. “We’re just not doing that here in Florida, quite honestly.”

In terms of the next semester, a top official at Florida’s Department of Education announced that schools would be allowed to continue to offer students and their families the choice of remote or in-person learning throughout Spring 2021. In Miami-Dade, about 55 percent of students are taking classes online. For the United Teachers of Dade, the state announcement was not enough.

“Given the astronomical rise of COVID cases we are seeing in South Florida, not just in our schools but all over the region, it is safe to say that our teachers and educational staff would be in favor of any option that would allow for online learning to remain through Spring 2021, but this action hardly addresses the inevitable health crisis that our community is facing in the coming weeks,” Hernandez-Mats tweeted. “It is just another self-serving Band-Aid being placed on a gashing wound in the hopes that it won’t bleed out.”

“I never thought I’d be in that position of fearing for my own safety by having to go back to work.” —  Erin Caputo, fourth grade teacher

The Miami-Dade County district, in particular, stands out as one of a few Florida school districts that extended this flexibility to teachers. Other districts allow the choice only for parents and their kids, while teachers are required to instruct in-person.

But this flexibility leaves some teachers in a dilemma of deciding whether to teach in person or remotely. As Caputo explained, “I never thought I’d be in that position of fearing for my own safety by having to go back to work.”

Many teachers are juggling a hybrid system, where they face a classroom of students while at the same time teaching online via Zoom.

“It’s challenging to kind of wrap your head around what’s going on, but it still maintains the integrity of the classroom,” said Crawford of her experience teaching a hybrid class. “I feel fortunate that I’m in a place where those kinds of compromises can be made. But …  it’s just not the same thing to look at a computer screen with pictures of people as it is to interact with students [in real life].”

As COVID-19 infections continue to rise — with experts and health professionals warning of a painful winter as people ignore recommendations and travel or host holiday events — Florida schools will continue to struggle.

“This is not just a school issue, this is a community issue. … Even if the governor is failing to lead in this work, everyone in our community can come together and decide we should all be wearing masks to protect others, and ourselves,” Spar said. “This approach where people think it’s okay to be selfish and not wear masks because they don’t want to, at the expense of others is just not American. …  [Controlling] the spread of COVID ultimately means our schools don’t have to close. It’s just that simple.”