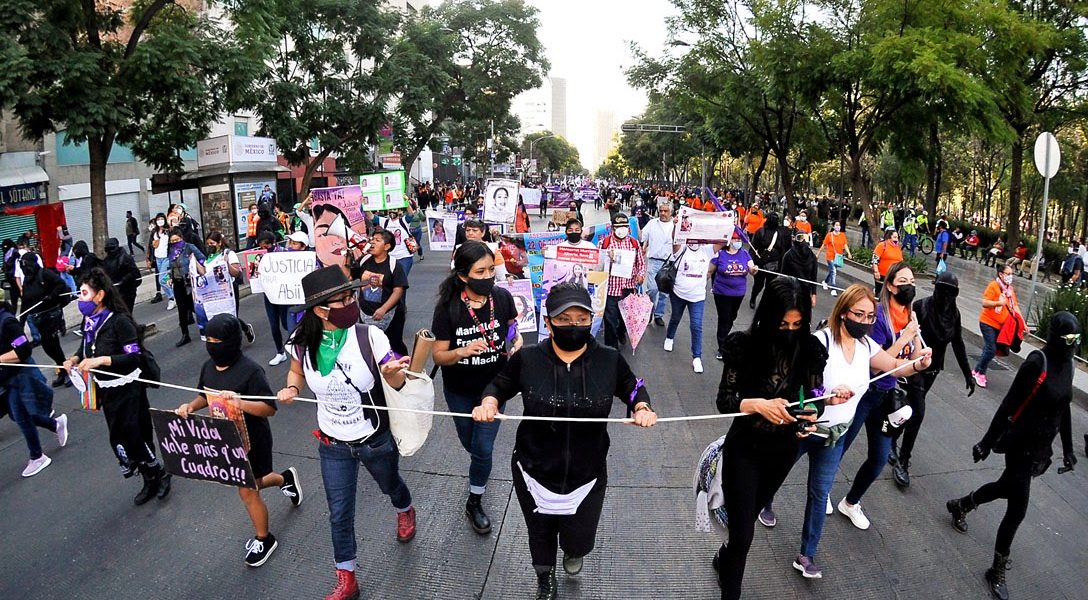 A group of women carrying posters on the International Day for the Elimination of Violence against Women in the main square in Mexico City, Mexico, on November 25, 2020. Photo credit: © Eyepix/NurPhoto via ZUMA Press
Government Integrity Health & Medicine International

While America’s streets filled with protesters last year to proclaim “Black Lives Matter” and to rail against police brutality, Mexico’s streets echoed with their own strong voices for a different cause — “Legal Abortion Now.” Protests erupted in historic ways in many parts of the country. They came strong and fast; the changes, though, were nonexistent. In all of Mexico’s 32 states, women can still go to jail for having an abortion. Since 2015, there have been more than 2,000 criminal investigations for abortion — 2,135 to be exact. Although each state has different restrictions, a legislative push has been successful only in Mexico City in 2007 and Oaxaca in 2019, both of which decriminalized abortion during the first 12 weeks of pregnancy.

“The strategy we did in Mexico City was of a different order. … It was a legislative strategy,” said Marta Lamas, one of Mexico’s most prominent feminists. But “if you don’t have people on the street demanding and pushing, it is very difficult,” added Lamas, a political science professor at the National Autonomous University of Mexico who testified at the Supreme Court of Justice of the Nation in the groundbreaking trial that upheld legalized abortion in Mexico City. Throughout 2020, Mexican authorities clashed with angry women determined to change abortion policy. Last January, women took to the streets of the capital to demand the decriminalization of abortion for the entire country. They formed a “green wave,” clad in distinctive abortion rights green scarves. They held homemade banners and posters and faced supporters of the Catholic Church, who object to abortion on religious grounds.

“It is not religion itself, it is the Church and Church officials,” explained Lamas. “The problem is that the Church intervenes in politics even though we have separation of church and state. And here in Mexico the Church still works a lot in the heads of legislators.”

Two months later, tens of thousands of women marched throughout the country for International Women’s Day to defend women’s rights, protest gender violence and femicides, and demand safe and legal abortion. That historic number included 80,000 protesters in Mexico City, unprecedented turnouts in Monterrey and Guanajuato, and the first women’s march in Tapachula, Chiapas.

“What I see is that groups of young feminists are finally beginning to act publicly to pressure and push the issue of the law,” said Lamas, who is is the founder and director of Feminist Debate magazine, one of Latin America’s most important feminist journals, and also co-founder of GIRE, an organization that aims to circulate objective, scientific, and secular information on abortion in Mexico.

The colors green, purple, and pink, which represent the movement, predominated in the waves of women. Many women held posters with phrases such as “I don’t wish that women have the power over men, but over themselves” and “Sorry for the inconvenience, but we want to live without fear!”

The day after, on March 9, 22 million women participated in a milestone national strike, #UnDíaSinNosotras (A Day Without Us), to visualize a Mexico without women. No women in the streets, no women at work, no women in school, no women shopping, no women on social media. The business group Concanaco Servytur estimated that if every woman took part, their absence could cost the economy up to 1.37 billion dollars. Women who couldn’t participate for personal reasons were invited to wear purple as a sign of solidarity.

“It will not come from the parties, because they are afraid that the church will campaign against them and from the pulpits the priests will say, ‘Do not go to vote for this party because they are murderers and you are going to go to hell and will be excommunicated.’ As long as people continue to believe those things, it will be very difficult to change it.” — Marta Lamas

But there was still governmental opposition. In May, the Guanajuato Congress rejected two initiatives that sought to decriminalize abortion during the first 12 weeks of pregnancy or when the woman’s health is at risk. In July, the Supreme Court of Justice of the Nation rejected an injunction that would have decriminalized abortion in the state of Veracruz. If upheld, the injunction by a lower court judge would have legalized abortion for health reasons in the first 12 weeks of pregnancy. It would have also removed time limit restrictions on abortions in the cases of rape. Two days later, women returned to the streets of Mexico City to protest the Court’s decision. They also accused the capital’s police of attacking and criminalizing them, denying them the right to protest.

“I believe that much more public debate is needed,” Lamas emphasized. “You have to have an important public debate so that people know what is at stake. If we keep the law as is, these are the costs. We change the law, these are the benefits. And that is what Mexico has not had because there has been a censorship by Catholic businessmen.”

In September, the National Front for the Family organized a march in Monterrey protesting abortion rights initiatives across the country. More than 1,000 people crowded the Gran Plaza, including groups of nuns, families with children, and elderly people. A week later, hundreds of women in Guadalajara and Mexico City took to the streets once again to march for the decriminalization of abortion to celebrate International Safe Abortion Day.

There was one major breakthrough for the movement. On November 24, university students peacefully seized the Puebla Congress to demand the decriminalization of abortion in the state and legal action against the rise in femicides. They hung green banners around the building in support of reproductive rights for women and demanded a dialogue with the authorities to discuss government action on the matters.

The following week, women marched in Puebla in support of the students in the 10th annual Marcha de las Putas (March of the Whores) demanding legislators decriminalize abortion and allow clinics to carry out the procedure for free. On December 18, the student feminist group announced their release of the Congress after reaching agreements with legislators. The Puebla Congress is set to vote to decriminalize abortion on April 7 of this year, with an open parliament to discuss and debate starting this month.

While the movement continued to hit roadblocks in most of Mexico, years of protest finally resulted in victory in Argentina last year, which legalized abortion in the final days of December, becoming the fourth country in Latin America — along with Uruguay, Cuba, and Guyana — to do so.

“Mexico has this complication that each state has the issue of abortion in its penal code,” Lamas clarified. “Therefore what happened in Argentina, in which a presidential decree implemented change, can’t happen in Mexico because we are a federal republic. So from the beginning, we know the point is to go state by state changing things,” she said.

“What I hope, and the last things that have happened in 2020 give me a lot of hope, is that more young feminists begin to go out to the streets and go to the deputies and tell them ‘We want you to change the law,’” Lamas said. “It will not come from the parties, because they are afraid that the church will campaign against them and from the pulpits the priests will say, ‘Do not go to vote for this party because they are murderers and you are going to go to hell and will be excommunicated.’ As long as people continue to believe those things, it will be very difficult to change it.”

Lamas put the issue, conflict, and hope in simple words: “The issue of abortion is the issue of women’s freedom.”

Sofia Tafich is a Mexican woman who has lived in Mexico for much of her life; she graduated in May 2020 from the University of Texas at Austin with a degree in Journalism and Rhetoric & Writing. Tafich is an apprentice in WhoWhatWhy’s Mentor-Apprentice Program, whose goal is to help train the next generation of journalists. For more information on participating as a mentor or apprentice, or if you would like to support our work, please contact us.