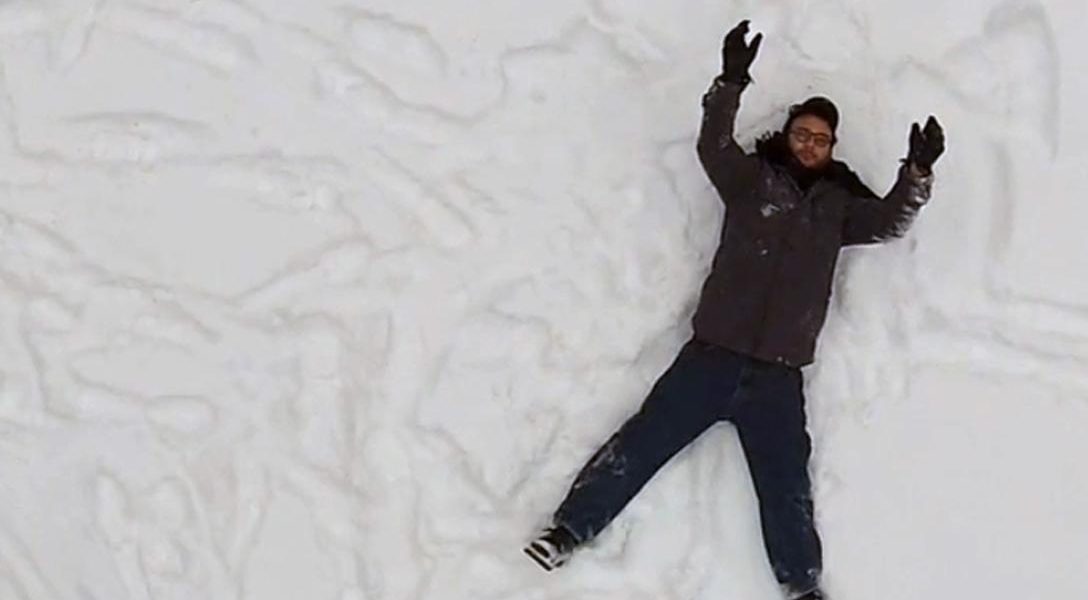 Film Director Josh Fox  Photo credit: Adapted by WhoWhatWhy from How To Let Go Of The World movie trailer
Environment

Welcome to the End of the World — Everybody Dance

Just before the Sundance Film Festival screening of his documentary about the coming end of the world, Josh Fox came on stage, and, oddly — did a marvelous little dance.

He’s an unusual fellow with a refreshingly startling approach, to be sure — and it is a pleasure to contemplate anything he produces. Including, notably, his new ode to what may be the final years of life on Earth.

We aren’t talking here about God’s Plan. We’re talking about the result, in large part, of our own stupidity, laziness and selfishness.

This is no simple matter, so perhaps it is appropriate that a film taking it on has a very complicated title: How to Let Go of the World and Love All the Things Climate Can’t Change. It is a kind of natural evolution from his earlier work.

It Started With A Dying Tree

His horizons broadened even further when he noticed that a tree with special significance to him was dying, and that the cause was a parasite moving up the eastern seaboard — right along with the changing climate, and the warming.

But when he tried to confront the enormity of the weather changes — with the increasingly violent weather, tornadoes, hurricanes, flooding, rise of sea levels, etc — he, like most people, felt overwhelmed. Both by the challenge of doing anything at this point that could reverse affairs, and by the utterly crushing and very real possibility that it is altogether too late for civilization.

For those who still believe that Climate Change is all a con, there are plenty of indicators, small and large, that prove otherwise.Like how Australia has had to invent new colors for its weather maps because, simply, it has never been that hot before. And the Greenland ice sheet, which will raise sea levels to unbearable levels unless it can be protected, will disappear unless we cut emissions by 80% by 2020, i.e. four years from now.

Meanwhile, the comic-book-sinister fossil fuel kingpin Koch Brothers plan to spend more than a billion dollars this year to keep candidates firmly denying Climate Change. On and on it goes.

As Fox says, it is just too much to bear: “I don’t know about you, but I’m ready to watch a few cat videos right now.”

Instead, he went to work.

This new, entertaining and paradoxically hopeful film humanizes Climate Change and moves people from immobility in the face of the daunting task to the far more satisfying and even potentially momentous role of…doing something.

Connecting with and caring about others. Seeing what they are doing and realizing what we could be doing — or how much more we could easily be doing.

He set out to go around the world to document climate change in people’s lives, and ended up discovering great heroes everywhere, in their own small yet powerful ways, taking a stand. His visits to 12 countries on six continents brought him into the presence of people fighting all kinds of extraction, from tar sands to strip mining for coal. He also began seeing the far less destructive alternatives in almost every case.

From poor African Americans in the Rockaway Beach section of New York City reeling from the floods of Hurricane Sandy (the largest storm to hit the East Coast of the United States in recorded history) to the masses of Beijing who stay indoors rather than contend with the noxious air, to the inhabitants of Pacific atolls which are literally disappearing, it is both a warning and a celebration of some remarkable people — a reminder that we are indeed all in this together and that we all sink or swim.

The Amazonians and other indigenous people of South America are the ones who suffer the most from our relentless appetite for more, more, more. Yet, ironically, they manage to live contented lives with astonishingly little. These “primitives”, in Western eyes, come off as an awful lot wiser than we are.

Finding Hope in the Strangest Places

And then there are the resisters:

Like the Sarayaku tribe in the Amazon. They pushed back when soldiers tried to force them out, got cameras to film the destruction, put up a solar-powered documentary editing bay deep in the jungle, and sued an oil company in the Inter-American Court of Human Rights  — and won.

Like the Chinese, who are embracing solar energy with vigor, and rapidly driving down the cost of this critical solution.

Like Tim deChristopher, who spontaneously decided to bid at a Bureau of Land Management sale of oil and gas leases in Utah’s redrock country as a symbolic move, and prevailed, though he couldn’t actually pay. His protest led to 21 months in prison. But the government reversed itself, saying it hadn’t done proper environmental and other due diligence, and it canceled many of the leases.

Good news, too, comes from efforts close to home. In 2011, the Delaware River Commission took fracking off the table for Fox’s community and the governor, under intense pressure from both sides, decided it would not come to New York State. But elsewhere, fracking continues its destructive march.

Will this film be the clarion call that fosters a revolution? Probably not, but for at least some portion of the populace, it could serve as the impetus to try and do something. Or at least to care enough to make the end of civilization as much a part of our conversation as, say, the Super Bowl.

Related front page panorama photo credit: Adapted by WhoWhatWhy from How To Let Go Of The World movie trailer