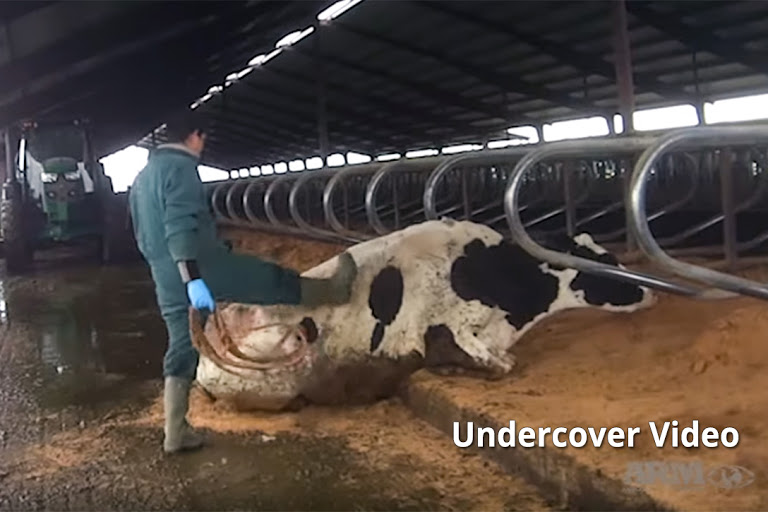 There Is Nothing ‘Organic’ About Animal Cruelty

A consumer watchdog is accusing a Texas-based “organic” farm — which claims that it is “a great place to be a cow” — of abusing its livestock in violation of federal law.

The group’s complaint not only names Natural Prairie Dairy, which has been certified as a producer of organic milk, but also the Texas Department of Agriculture (TDA), which granted the farm its organic certification.

The Cornucopia Institute, a nonprofit that works to promote economic justice for family-scale farms and healthy organic foods for consumers, wants the US Department of Agriculture to investigate animal abuse and other violations of the National Organic Program’s regulatory standards.

Cornucopia has already filed multiple complaints over the past 10 years against both Natural Prairie Dairy and their certifier, TDA, for various organic violations, Marie Burcham, Cornucopia’s director of domestic policy, told WhoWhatWhy.

The most recent complaint, filed last week, involves violations of the federal standards on Livestock Living Conditions. It claims that this “family farm,” which houses more than 25,000 cows at more than four Texas locations, “cattle are apparently being confined in squalid, overcrowded conditions that mimic the worst practices in conventional agriculture.”

But, as shown below, even worse goes on.

The complaint against the company was the result of an investigation by the non-profit Animal Recovery Mission (ARM). On July 23, ARM released a report on its undercover activities, documenting  mistreatment of their livestock. Among their findings:

Abuse: dairy cows being kicked, stabbed with screwdrivers, tied up for hours in painful positions, and moved with forklifts.

Neglect: no clear treatment of sick animals with various infections, including mastitis (inflammation and infection of the breast that can be fatal if untreated); and injured cows with open wounds.

Neglect: animals living in their own feces.

Lack of outdoor grazing and pasturing.

Below are two videos on the situation. The first is from Fox News; the second, from ARM. Warning: they are both graphic and very hard to watch:

Burcham notes that outright abuse and neglect count as separate things “because abuse can sometimes be an actual felony.” And the lack of grazing and pasturing is a violation.

ARM called the conditions there cruel and launched a petition to demand that Natural Prairie make changes.

“An organic dairy in the United States had never been investigated before,” said Richard Couto, ARM’s founder. “We got a job at Natural Prairie Dairy, and we wanted to see what they do every day. We quickly got hired and we videoed what was going on behind closed doors there, and we were horrified.”

Their investigator, he noted, was a US Army veteran. “This guy did tours of Afghanistan and Iraq and even he was horrified at what he saw,” Couto said.

Based, in part, on the undercover videos, Cornucopia decided to file a complaint challenging Natural Prairie’s organic certification. As Burcham noted, certified farms are required to be in compliance with federal organic standards.

“This particular complaint arose around the undercover investigation by Animal Recovery Mission,” Burcham said. “They had undercover investigators in the actual dairy and they observed some things that would constitute violations of the organic rules. We have a history of sending complaints about them. We’ve been following this dairy, and they are hopefully being outed to a larger public now.”

USDA Certified Organic refers to a certification process for producers of organic foods and other agricultural products, based on the Organic Foods Production Act of 1990.

“Anything with the organic label has to have this to be certified,” Burcham said. “You have to go through that process to have the organic seal on your products.”

They also filed a complaint against the Texas Department of Agriculture, she said, because “they should have noticed that this farm was violating the rules.”

Getting animal abuse claims investigated can be a particular challenge, she said, explaining that the company will often say, “Oh it was one person doing that.”

Then, they fire the person and the government says: “Okay, fine.”

“In this case it was a pervasive culture of abusive behaviors,” Burcham said. “Yes, there may be some employees who are bad actors, but if the company is allowing them to behave that way, that’s not right. But very rarely have I seen actual criminal investigations go against companies. It’s usually against individuals.”

Power of the Organic Label

A key part of this, Couto said, is that companies want that “organic” label because consumers think organic products are healthier and more nutritious. So it becomes a powerful marketing tool for them.

“Once they have that seal of approval, they can charge double the price,” he said. “I can tell you right now there’s no difference between organic and regular dairy.

“In this case it’s pretty clear that this whole huge mega-dairy has intentionally or unintentionally slipped through the cracks,” Murcham said, adding that Cornucopia supports family scale farmers and smaller operations, and act as a “farming watchdog” for them.

“Our big goal is to empower consumers and farmers with correct information as opposed to these huge corporate factory farms that are destroying these smaller operations,” she added. “We hope the USDA takes our complaint seriously.

“Public awareness is absolutely one of the most important things,” Murcham noted. “It’s important for people to know what they’re buying. If people are buying organic foods, they’re doing it for a reason, and we’re working against these powerful industrial marketing powers as well. A lot of people don’t have time to do that research so we do it for them.”

In the meantime, Natural Prairie Dairy markets its wholesome family farm image in various ways, including the use of this video showing scenes of happy, healthy cows peacefully grazing on a beautiful, bucolic countryside:

National Prairie Dairy has not responded to a request by WhoWhatWhy for comment.