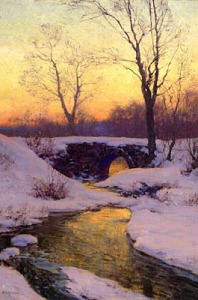 Why We Should Be Thankful For the Cold Some people not only deny global warming—paradoxically (or not) they also wish for it.

They particularly and most vigorously deny its existence, with what at first glance seems empirical rationality, when they are experiencing bone-chilling weather. Or when they watch with horror as tons of snow pile up on top of places like Buffalo, NY. That certainly seems to make sense.

Except that things are more complicated, and the most descriptive term probably isn’t “global warming” – or even “climate change”; it is Climate Chaos. And this ongoing phenomenon is fueled by global warming—even the heavy snows in Buffalo are a result of warming. Thanks to the overall heating of the planet, the Great Lakes are more often ice-free. And when a cold blast from the arctic flows over the warmer lake water, it picks up moisture and turns it into snow. This is the “lake effect.” Let’s take a closer look at Buffalo. The daytime high temperatures on certain days may surprise you, as may the wild fluctuations. From AccuWeather:

Typical temperatures in the high 40s are predicted for this area in the near future, and we may see widespread flooding. Or not…depending partly on the winds.

Because that is exactly what we are already experiencing. In fact, even some of the coldest places on the planet are melting. Take Greenland.

Why should you care about what’s happening in this remote, forbidding place?  Well, if the entire Greenland Ice Sheet melted, NASA scientists say—the sea level would rise by a staggering 23 feet. And Greenland really isn’t so very far away, as you can see from the map. It is also huge, nearly 80 percent the size of the entire United States east of the Mississippi. Greenland belongs to the North American continent, and its southern part has the same latitude as Alaska, as shown above. Is Greenland melting? Climate scientist Konrad Steffen says the amount of ice Greenland lost in 2007 was “the equivalent of two times all the ice in the Alps, or a layer of water more than one-half mile deep covering Washington, D.C.”  These pictures should leave no doubt. The rate of ice melt in the western part of Greenland has sped up by about 30 percent since 1979.

Seven years later, the loss is even worse: The graph below shows the stunningly rapid disappearance of ice in 2014 alone—compared with average loss between 1981 and 2010. And rather alarming things are happening at the opposite end of the planet, in the Antarctic.
THE ANTARCTIC

Melting of an area of the West Antarctic Ice Sheet has “passed the point of no return,” according to Eric Rignot, a glaciologist at the University of California, Irvine, and NASA’s Jet Propulsion Laboratory.

Rignot and his colleagues have documented a continuous, rapid retreat of glaciers in a large section of West Antarctica. After studying the phenomenon for decades, they concluded that this section is unstable and will contribute significantly to sea level rise in decades and centuries to come.

Red shows where temperatures have increased the most during the last 50 years. Dark blue shows where there was less warming. Temperature changes shown are in degrees Celsius.” According to NASA, the Amundsen Sea area is only a small part of the West Antarctic Ice Sheet, but it has enough ice to raise the sea level by four feet.

And something extraordinary happened elsewhere in the Antarctic 12 years ago. Between January and March 2002, the northern section of the Larsen B ice shelf, an area larger than the state of Rhode Island, collapsed. (See inset in diagram below). Since 1995, the ice shelf has shrunk by 40 percent. INCREASING SEA ICE IN THE ANTARCTIC

Mysteriously, while the glaciers have been melting and retreating, the sea ice in the Antarctic has been increasing. This has been well known for years, based mostly on satellite images.  See diagram below: What was not known, until recently, is that the sea ice is thicker—perhaps much thicker—than was previously thought, scientists announced this month. They discovered this with the help of a new tool: an AUV (autonomous underwater vehicle).  This is an underwater robot designed to measure the underside of ice floes—with upward-looking sonar.

But why is the Antarctic sea ice increasing in the first place? Several experts—including Ted Maksym, the lead author on the current study with the AUV—said that global warming seems to be the cause. Here is a summary of how the researchers said it works:

In the Antarctic, the main driver is the wind, not the sun. Changes in the strength and direction of the wind pushes the ice farther north, extending its reach. These changes in the wind are related to climate change from greenhouse gases. As NASA’s Waleed Abdalati put it:

“Climate change has created essentially a wall of wind that keeps cool weather bottled up in Antarctica.”

And, they say, the hole in the ozone layer indirectly causes winds near the ground to be stronger and steadier, pushing the ice further outward. The hole in the ozone layer is greater in size than all the land mass of North America.

Next, we travel from the Antarctic to its polar opposite, the Arctic.

The Antarctic is a land mass surrounded by ocean. The Arctic, on the other hand, is the opposite: it is ocean surrounded by land.

And here, melting sea ice is a problem—but for very different reasons than those associated with melting glaciers.

One important difference is simple, but could not be grasped by Rep. Steve Stockman (R-TX) a leading congressional advocate of the notion that man-made climate chaos is a hoax and has nothing to do with melting glaciers (though it is unclear if Stockman knows they are melting).

If you’d like to be smarter than a congressman—should such a thing be possible—consider the following somewhat technical background. It is about the mechanical difference between melting sea ice—versus melting glaciers and ice sheets.

To understand it, imagine this simple experiment:

Take a glass containing nothing but water and add ice cubes to it. As the ice displaces the water, the water level rises. (Just adding more water to the glass will have the same effect.)

But if you give the ice cubes that are already in the glass time to melt, you will see that the water level does not rise. Why should it? All that happened was this: melted water was substituted for what was previously an ice cube. No additional water or ice cubes were added.

Here’s how this relates to the current discussion: glaciers and ice sheets, which are grounded, are like the ice cubes, or ice melt that is not yet part of the sea. When ice melts, the water drains into the ocean, and the ocean level rises. In other words, ice sheets provide additional water.

Sea ice, on the other hand, is already part of the ocean.  When it melts, it merely substitutes a liquid for a solid. Each form takes up about the same amount of space. So melting sea ice does not directly cause the sea to rise. Rep. Stockman gets this part—but not the part about ice cubes not yet placed in the water. At a House Hearing on climate, he said:

“Think about it, if your ice cube melts in your glass, it doesn’t overflow. It’s displacement. This is some of the things that they’re talking about that mathematically and scientifically don’t make sense.”

This is why Rep. Stockman does not believe melting glaciers and ice sheets could possibly raise the level of the ocean. Perhaps, and this is said with a smile, someone should add an ice cube to whatever he’s drinking, and make him watch. But enough of Rep. Stockman and his glass of whatever. Let’s get back to the problem of melting sea ice.

Sea ice reflects the rays of the sun. When it melts, the sea water becomes exposed. Dark sea water does not reflect the sun’s rays, it absorbs them. This warms the water which, in turn, melts even more sea ice. And the Arctic Ocean is that much warmer.

Pictured below is NASA’s view of the North Pole. It shows the extent of sea ice on Sept. 17, 2014. See the orange line?  It shows how much more sea ice there used to be, on average, from 1981 to 2010, on that same day. Over the past three decades, over a million square miles of perennial sea ice has disappeared.

Be thankful for what is left of the ice cap: What we have shown above is only part of a very complicated process that seems like a Rube Goldberg machine, with events in one place having often unexpected effects far away—some of them irreversible. There are many mysteries, and many certainties.

One of them is the permanent loss of a way of life.

We hope that, when you are sharing your blessings with your family and friends, you will take a moment and ponder the obligation we all have, considering both current and future generations—to steward our world, wisely.