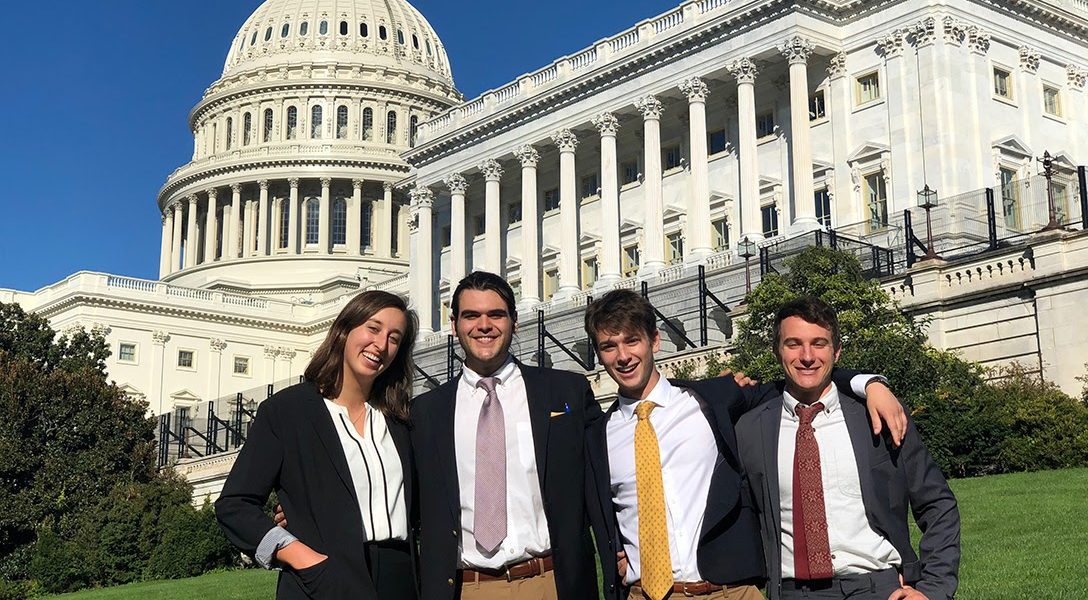 In 2019, the year youth around the world stepped out of the classroom and onto the streets to demand climate action, four students stayed at their desks. They had a different plan.

As the climate movement sought to expose adults and institutions for failing to address climate change, Brown University undergraduates Jessie Sugarman, Cole Triedman, Andrew Javens, and David Wingate sat down together to get some specifics: to find hard evidence, name names, and hold people and corporations accountable for their role in the crisis.

As part of Brown’s Climate and Development Lab, they were tasked with developing and answering a research question.

With an in-depth study into 10 investor-owned utility companies, they unraveled a byzantine, well-funded, and well-coordinated effort by an elite group of coal, rail, and utility companies to question the reality of climate change and cast doubt on the science that backs it up.

The involvement of freight rail companies and the entire utilities industry in what the report calls the “climate-change countermovement” had been largely unreported.

“They’ve connected the dots in a way other people have not,” their professor, Timmons Roberts, told WhoWhatWhy.

The findings of these twenty-somethings reveal that corporate opposition to climate change is broader and more sophisticated than previously realized.

It goes beyond ExxonMobil and the Koch brothers. It is hidden in the shadows, behind the facades of front groups, creative marketing tactics, and stacks of cash. Of the four students who authored the report, only Triedman had experience with this type of in-depth, original reporting. Serving as the lab’s teaching assistant, he developed the research question his team explored. A summer internship at the Climate Investigations Center (CIC) helped him chart the course of the investigation. His boss, Kert Davies, planted the seed for what became Triedman’s proposal.

Diving Deep Into a Dirty Place

In mid-August, Triedman received a call from a frantic Davies, distraught about the lack of carbon-accounting done on the coal supply chain — the food chain of coal. Thinking that carbon-accounting was better left to someone with a PhD in economics, not just a few months of Economics 101, Triedman reminded Davies that he was just a junior in college, and his skills could only be stretched so far.

But sitting down after the call, he realized what he could do: He could carry out “a deep dive into where these utilities have stood over history on climate, what they’ve done, who they’ve affiliated with,” he told WhoWhatWhy.

With a team of determined players by his side and the Climate and Development Lab behind him, he set out to discover whether and how the 10 utility companies coordinated with the coal and rail industries, what political company they kept, and how their future plans aligned with decarbonization.

The four students, all in their junior or senior years, compiled a 73-page report. On top of their other course work, they spent hundreds of hours poring over documents and spreadsheets.

They taught themselves complex topics that would be difficult for anyone — not just undergraduates — to wrap their head around. Some questions were as mammoth as figuring out how politics, coal, the utilities industry, and money all play a role in the climate change countermovement, and others as minute as the difference between a 501c4 and 501c6 organization.

“For every paragraph or sentence that got written in the actual report, there were probably 10–15 pages of documents or articles or spreadsheets read,” said Wingate, describing the arduous process of their research.

For Javens, Sugarman, and Wingate, this opportunity was unique.

“I had never put myself in the headspace to let myself dream about an opportunity like this and now it’s totally opened the mental floodgates for what I think is possible for a group of young people to do,” said Javens. “We don’t have to wait for anyone to give us the go-ahead to do the work we think is important.” The students admitted that part of the reason they worked on this report was that they were, essentially, doing their homework. However, their decision to apply to the Climate and Development Lab — known at Brown for being a challenging and time-consuming program — and their determination to pull off the novel and quality work they did came from a much deeper place.

For Javens, finding that one of the utility companies he was investigating was the one that powered his family’s home added a personal touch.

“For the most part, everyone deals with a utility company,” he said. “They are a ubiquitous part of society that is a gray area and we don’t often pay attention to them.”

Triedman said that it was “really scary” to realize how the influence of the fossil fuel industry extends “into every nook and cranny of our society.”

“It’s been easy for media and for people to lay blame for climate change on a handful of boogeyman companies that in the last decade have been effectively called out,” he added. “But the reality is the climate change countermovement is so much more complex and more saturated with companies across sectors, across industries. It felt like that was a narrative that is on one hand extremely overwhelming but on the other hand extremely important to get out there.”

Triedman and his team hope that their original research, released just over a month ago, will find its way into the hands of policymakers and have an impact on Congress. That may already be happening. Soon after the students headed home for winter break, the Atlantic wrote about their report. Oregon Rep. Peter DeFazio (D) came across that article and, troubled by what he read, sent a letter to the president of the Association of American Railroads (AAR) asking for their response.

“Contrary to AAR’s shiny messaging and glossy advertising materials, the article suggests that its core membership is covertly financing the subversive campaign to deny the inarguable realities of climate change,” DeFazio, who chairs the Committee on Transportation and Infrastructure, wrote.

The article shows that four major railroads — BNSF Railway, Norfolk Southern, Union Pacific, and CSX — have participated heavily in the climate change countermovement. Over the past few decades these railroad companies have put millions of dollars toward discrediting climate science and opposing meaningful climate legislation, the report indicates.

“I write with a simple question,” wrote DeFazio, “is this true? And if so, how can your organization continue to tout the environmental benefits of freight railroads while these same railroads are funding organizations who deny climate change?”

In a response that acknowledges the “real and significant challenges to communities across the globe” that climate change poses, AAR President Ian Jeffries largely evades the direct question DeFazio posed.

Jeffries said the group and its member companies “work in partnership with numerous organizations that support the freight rail industry and our customers.” He notes that AAR has not been a member of “the majority of the organizations listed in the Atlantic article” but that some railroads are still members of America’s Power, which was formerly the American Coalition for Clean Coal Energy.

As those in power continue to provide empty promises about how they will protect us from the climate crisis, it is — once again — the work of young people that has brought truth to light and turned heads.

Climate Change on Trial: Can the Courts Save the Planet?

However, he thinks the work of undergraduates in academic organizations like the Climate and Development Lab refutes that idea, indicating to older generations that the youth movement is more than just talk.

“It shows an attitude that extends and reflects across the entire youth climate movement that we are powerful and we are committed and we are willing to put in the work to see change,” Triedman added.

The journey toward the team’s discoveries was not purely academic. Sometimes, it was also emotional.

“I am a scared 22-year-old who is wondering what the world is going to look like,” Wingate recalled thinking, “and I’m sad that companies have been intentionally lying about this rather than addressing it. That was hard. And it continues to be hard.”

During investigative interviews, Wingate realized something that drove home the complexity of the crisis.

“Not everything is so black and white. They weren’t bad people when I talked to them,” he said. “They were human beings … and they were trying to do their jobs, make a living and support their company.

“To put real people on the other side… that was a big moment for me in terms of understanding the complexity of the situation.”

As the reality and complexity wore on them, the importance of their work and their energy — the same energy that has made young climate activists like Greta Thunberg a major force in the climate change debate — carried them through.

“When you don’t have experience doing something, it’s hard to imagine what you can do,” said Javens.

“I think the moment I started to wake up to these feelings of ‘this is important’ is when I was sitting in a room with people who have been studying climate for their whole life [the students met with the US Senate Climate Task Force and environmental journalists in Washington, DC] and they’re directing questions to a group of undergraduates because … we’re the only ones who studied it to the depth that we did.”

For Davies, Triedman’s summer boss and director of the Climate Investigations Council — who has been in the environmental field for longer than these students have been alive — this report and the fact that it was put together by people so young makes him feel that the future may not be lost after all.

“It gives me great hope that there is a next generation of researchers, students, academics as well as journalists who will continue to pull on these strings and continue to reveal who knew what when on climate change.”