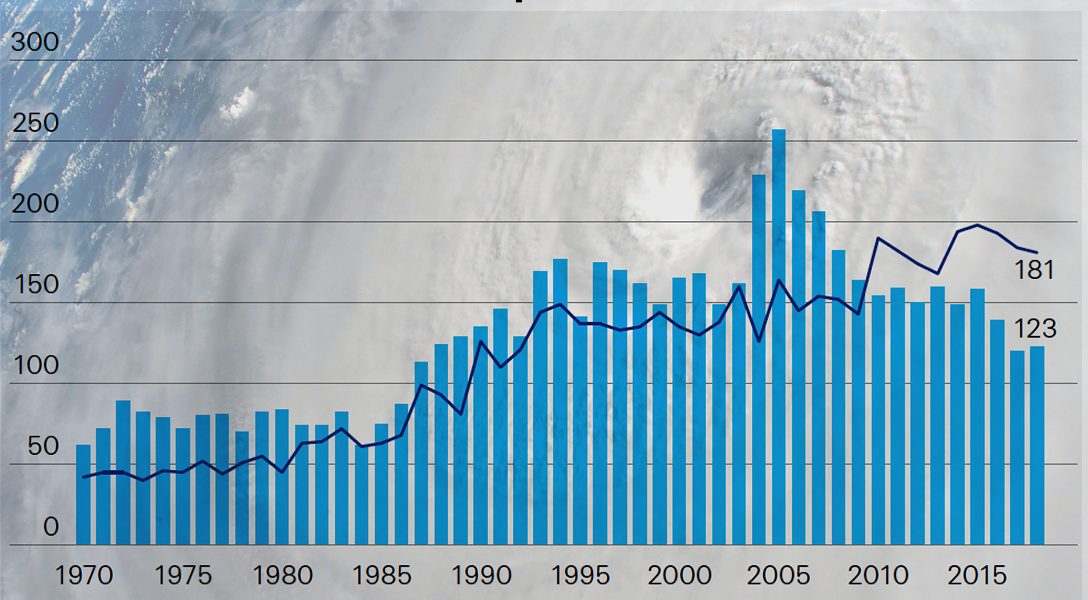 An underappreciated aspect of the climate change debate is the glaring cognitive dissonance in the brains of people who deny human-caused global warming. These are, for the most part, the same people who say the marketplace is the solution to every problem and the pricing mechanism the source of all insight.

But what if the market says climate change is real? That poses an ideological problem, because any barstool economist can tell you that prices are more than mere numbers; they are transmitters of critical information that you ignore at your peril. “Efficient market theory” says that under reasonably transparent conditions, prices tell you everything you need to know about the value of an asset or conditions in the world. As free-market evangelist and former GOP House Majority Leader Dick Armey (TX) famously put it, “Markets are smart; government is dumb.”

So if you’re the sort of person who thinks climate change is at best an open question but you also subscribe to the primacy of markets over consensus, you’re in a tight spot. Do you believe your revered, omniscient marketplace or do you stick with scripted party dogma? Or, as the eminent economist Chico Marx once asked, “Who are you gonna believe, me or your own eyes?”

A Bet on the Weather

The marketplace believes its own eyes, which tell it that global warming is happening and that the economic consequences will be significant, maybe even catastrophic. You see this in any number of places.

One is an obscure financial instrument known as a weather futures contract, traded on the Chicago Mercantile Exchange (CME). These instruments, which allow firms to bet on how temperatures will move over a given month in eight US cities, are in essence hedging tools: A fuel-oil company might buy them to protect itself against losses it could incur in a mild winter.  The contracts pay off if the holder correctly anticipates the degree of cooling or heating in relation to a benchmark, 65 degrees Fahrenheit.

They therefore “provide a direct measure of the market’s view on future climate,” says a 2019 paper by Columbia University’s Wolfram Schlenker and Charles Taylor for the National Bureau of Economic Research (NBER). It found that over the period 2002–18, the contract prices show “that financial markets fully incorporate climate model projections” and have been “accurately pricing in climate change, largely in line with global climate models” since at least the early 2000s, shortly after weather futures became available.

This is not some eccentric, niche betting pool: As of last year, says the Wall Street Journal, the notional value (essentially face value) of the CME weather derivatives was about $362 million, while that of the over-the-counter market (counterparties dealing one-on-one) was perhaps $7 billion.

“Anyone doubting the observed warming trend can make a significant profit by betting against it in weather markets,” says the NBER study, which didn’t note a lot of takers. “However, the observed annual trend in futures prices shows that the supposedly efficient financial markets agree that the climate is warming.”

The insurance industry, as one might expect, is also full of flashing red lights. A 2018 survey of actuarial professionals — the people who assess insurance and other risks — ranked climate change as both the top current and the top emerging risk. Swiss Re, one of the world’s two biggest reinsurers (firms that insure insurers), reported this year that covered losses from natural catastrophes in 2017 and 2018 totaled $219 billion, the highest ever for a two-year period.

That, say credit-rating agencies Fitch and Standard & Poor’s, could raise global reinsurance rates by up to 5 percent on average next year. S&P said rates in California, site of last year’s deadly Camp wildfire, could rise by up to 70 percent in 2020.

Munich Re, the other big reinsurer, has blamed global warming for the $24 billion in losses suffered in last year’s California wildfires, only $18 billion of it covered. It is warning that rising climate risks will inevitably raise premiums that ordinary people pay, perhaps to unaffordable levels. That seems to be happening already in California.

“If the risk from wildfires, flooding, storms or hail is increasing, then the only sustainable option we have is to adjust our risk prices accordingly,” Ernst Rauch, Munich Re’s chief climatologist, told the Guardian. “In the long run it might become a social issue.”

The Wisdom of Credit Ratings

Credit-rating agencies have already warned that climate change could hurt the risk profiles of countries and companies alike. That matters because a lower credit rating generally means higher borrowing costs, something the most vulnerable countries — among them Mozambique, Jamaica, and Belize — can scarcely afford.

An event unnoticed by most people but significant in the realm of risk management occurred in July, when Moody’s, one of the biggest credit-rating agencies, acquired a majority stake in Four Twenty Seven, a leading analyst of the dangers posed by climate change. “For [Moody’s] to come and buy this company that’s very focused and has some expertise in climate risks, it looks like they’re making this a very big priority,” Kathy Hipple, a financial analyst with the Institute for Energy Economics and Financial Analysis, told Inside Climate News.

Meanwhile, industries ranging from energy extraction to power generation, construction, and transportation worry increasingly about being saddled with “stranded assets” — hugely expensive capital projects that could be rendered worthless by changes in climate or climate-related policies.

The 75-Year-Old Book That Drives Our Politics

The Economist Intelligence Unit (EIU) estimated four years ago that, through the year 2100, some $4.2 trillion (in 2015 dollars) in manageable financial assets is at risk under even average forecasts for global warming. That’s about the value of Japan’s annual economic output. In the worst case, the EIU projected, we could be talking about $43 trillion — a third of the world’s managed financial assets and more than half the value of the world’s stock market capitalization at the time of the report.

There’s a reason 72 percent of the 6,937 companies surveyed last year by the nonprofit CDP (formerly the Carbon Disclosure Project) say they now integrate climate change into their business strategies.

Even Goldman Sachs, every Occupier’s favorite vampire squid, agrees with the scientists:

Goldman Sachs acknowledges the scientific consensus, led by the Intergovernmental Panel on Climate Change, that climate change is a reality and that human activities are responsible for increasing concentrations of greenhouse gases in the earth’s atmosphere. We believe that climate change is one of the most significant environmental challenges of the 21st century and is linked to other important issues, including economic growth and development, poverty alleviation, access to clean water, food security and adequate energy supplies.

That should persuade anyone outside the Trump/Fox News biosphere that climate change is a real-world fact, not a Chinese hoax.

Climate-change deniers don’t want to hear it, but the Gods of the Marketplace they claim to worship are telling them they are wrong, and that there is scant room for doubt or even for a serious debate.

Problem is, people desperate to defend cherished ideologies are usually adept at evading inconvenient facts and muddying the waters with false equivalence or outright lies — q.v. Intelligent Design disciples or the Communist Party of anywhere.

Alas, the marketplace, where lots of smart people have skin in the game, couldn’t care less about ideological agendas.

“When money is on the line,” note Schlenker and Taylor, “it is hard to find parties willing to bet against the scientific consensus.”

An earlier version of this article incorrectly implied that insurers suffered losses of $24 billion in in last year’s California wildfires. The $24 billion actually represents total losses by property owners, $18 billion of which was insured. The article has been revised to reflect this.