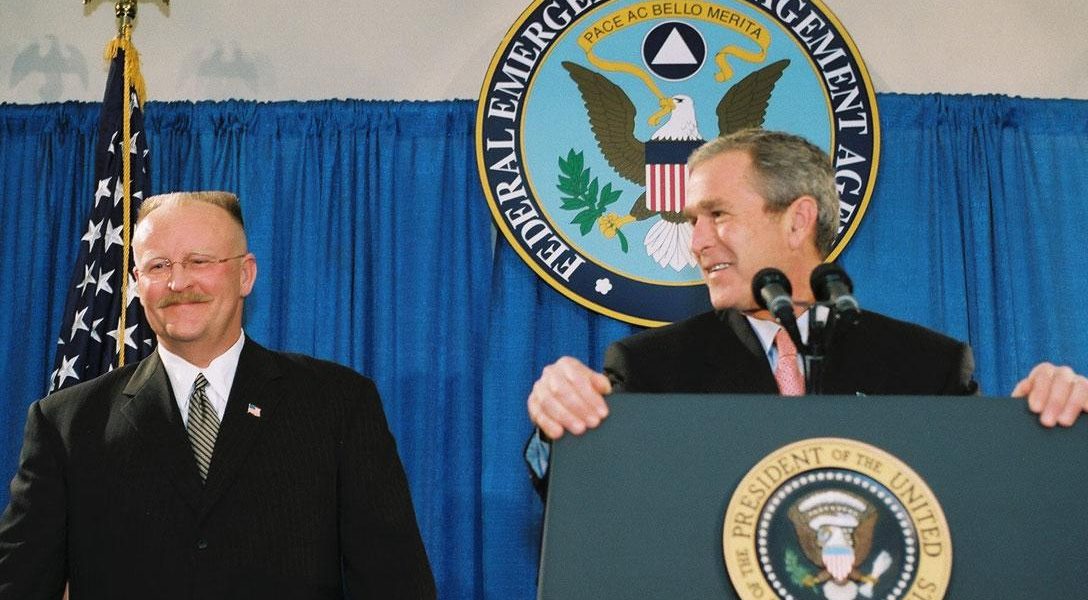 In the second part of this series, which you can read here, we discussed the origins of the partnership between Joe Allbaugh and Michael “Brownie” Brown, that ultimately contributed to the needless suffering of thousands of New Orleans residents.

“The official story is that Bush’s gubernatorial campaign lacked a strong hand at the tiller. Joe Allbaugh was seen as just the man…. He said he’d been involved in campaigns in 37 states by the time he got to Bush,” according to a political columnist for the Austin American-Statesman.

Whether that was literally true seemed less important than the ties Allbaugh had to Bush’s father. George H. W. Bush had an eye for problems that might sneak up on his kids — and for identifying people who could make the problems go away. (The elder Bush’s office did not reply to a request for an interview.)

In newspaper articles, Allbaugh explained his role in the Bush gubernatorial campaign as making sure the trains ran on time, and mediating the strong personalities of Karl Rove and Karen Hughes.

To Bush’s Brain and Bush’s Mouth, Bush’s Muscle was added. At 6-foot-3 and 275 pounds, Allbaugh was an intimidating presence.

“It was clear he wanted to use his size to project a strong or menacing sense of himself,” said Wayne Slater, Austin Bureau Chief for The Dallas Morning News. Allbaugh’s propensity to turn bright red when enraged led Bush to give Allbaugh the nickname “Pinky.”

If anyone — other than George W. — dared call him that, Allbaugh would whirl around and growl, “I will pinch your head off.” George W.’s father had an eye for problems that might sneak up on his kids. Joe Allbaugh was the perfect protector. As Allbaugh said about George W, “There isn’t anything more important than protecting him and the First Lady.” Photo Credit: George Bush Presidential Library / Wikimedia

His loyalty to Bush — a man who prizes that quality above all others in his subordinates — was unquestioned. “There isn’t anything more important than protecting him and the first lady,” Allbaugh once told the Washington Post from the governor’s office. “I’m the heavy, in the literal sense of the word.”

Ironically, the other heavy was Harriet Miers, a small woman hired, as was Allbaugh, by the tough Dallas lawyer Jim Francis, then Bush’s campaign chairman and a longtime friend of Bush’s father. As general counsel, Miers was in charge of fending off legal problems that threatened Bush with adverse publicity.

In 1999, Allbaugh left the governor’s office to manage Bush’s presidential campaign. He headed up a staff of 180, controlled spending, and spoke with Bush several times a day.

One problem facing the campaign was the rumor that Bush’s father had pulled strings to get his son out of Vietnam service, and into a safe Texas Air National Guard unit in 1968. There were even reports that Bush went AWOL long before his compulsory flying days were up.

The key players in keeping the lid on the National Guard story were Allbaugh and Miers. In 2004, a year before Bush nominated Miers for the Supreme Court, Allbaugh told The New York Times, “She’s the kind of person you want in your corner when all the chips are being played.”

It is unclear whether he ordered James to dispose of any old Bush military files that might prove embarrassing — an order former Lieutenant Colonel Bill Burkett, head of a Guard efficiency task force, claims to have heard Allbaugh issue in a conversation on James’s speakerphone.

Whatever was or was not done, the unexplained gaps in Bush’s National Guard service never became a central topic in the 2000 election.

With his “Iron Triangle” of Rove on strategy, Hughes on PR, and Allbaugh as the enforcer (plus an assist from the US Supreme Court), Bush triumphed.

Meanwhile, the unsinkable Michael Brown rebounded once again — this time from his firing at IAHA for fraud. Just as the politics-tinged horse association job appeared when Brown faced career and financial problems in Enid, Oklahoma, Brown would be rescued again. This time with a near-instantaneous hiring by the anti-union Electrical Contractors’ Association, that later won warm praise from President Bush — a temporary position while he waited to move to Washington.

Another constant in Brown’s bumpy career had been timely assists from his self-described “longtime friend and family attorney,” Andrew Lester. A prep school contemporary of George W.’s brother Marvin, Lester pops up at crucial points in Brown’s life — like a fairy godmother. When Brown lost an early legal job — Lester brought him in for a brief stint as his law partner. When horse-association problems engulfed Brown — Lester rushed to his defense.

On September 27, 2005, at a House Select Committee hearing, investigating the Katrina blunders, there was the pin striped Lester whispering legal advice in Brown’s ear.

Lester, who represented the Oklahoma Republican Party in a 2002 reapportionment battle, worked for a Bush-connected oil services firm when he was younger. He had been a close friend of Justice Clarence Thomas and regional director for the secretive Federalist Society (Chief Justice John Roberts denied being a member until his name turned up on a list). He was also short-listed for a federal judgeship under George W. Bush.

To this day, Lester insists his support is merely a factor of friendship — and maintains that Brown was eminently qualified for FEMA.

TOMORROW: In Part 4 of the series, we learn how Bush’s hand-picked team set about dismantling the competent, engaged FEMA team installed under Bill Clinton.