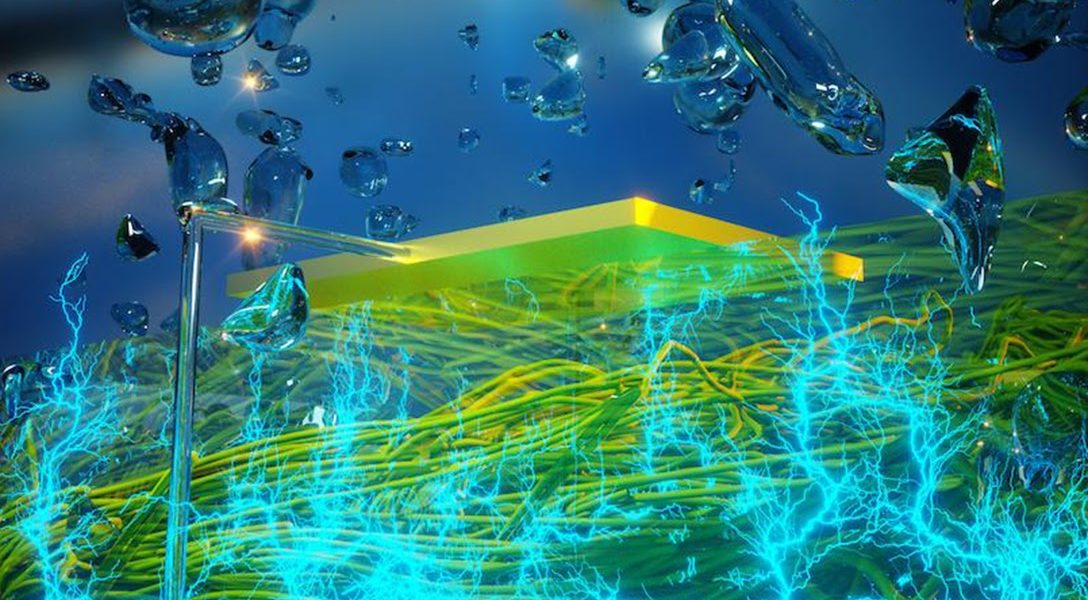 Picture a world entirely powered by clean energy — cars without tailpipes, homes without outlets, and batteries that recharge without you having to lift a finger. Imagine never having to think about whether your phone, computer, or headphones are powered up before leaving the house. Visualize a reality where the electric grid would never fail and fossil fuels were thrust so far into the past they felt like a remnant of a dream. A breakthrough green technology that generates electricity out of thin air could make all this possible.

The inner workings of the generator can be compared to the phenomenon that causes lightning: When clouds come together, the small bits of ice that create them repeatedly bump into each other as they move around in the air. These repeated collisions create an electric charge that builds inside the clouds. A positive charge forms at the top of the cloud and a negative one at the bottom, creating a gradient. A positive charge also forms on the ground and reaches as close as it can get to the clouds’ negative charge until the opposite charges find their way to each other and then — lightning.

Air-gen is like a tiny cloud with opposite charges built up between the top and bottom of the film. Because the top of the film is exposed to the moisture of the air and the bottom is not, a moisture gradient is created, causing water molecules to crash into each other, building up the charges. Subsequently, a voltage gradient is created that produces electricity from “thin air.” The team described this discovery in an article published in the peer-reviewed journal Nature this week.

The air-powered generator can succeed in a variety of environments, from the dry heat of Las Vegas in the middle of July to the cold rain of Seattle in February.

“Air-gen is a totally new mechanism,” said microbiologist Derek Lovley. The generator is unlike anything we’ve seen before. It doesn’t involve burning anything, there’s no smelly exhaust gas or hazy smoke plumes swirling above skylines. Air-gen is made from sustainably produced electronic materials.

Why Is Big Oil Bankrolling an ‘Environmental’ CO2 Capture Company?

The generator originally used nanowires from the microbe Geobacter, which is characterized by long filaments conducive to creating electronic material. Long is relative here. Lovley described long as “longer than the length of a cell.”

However, Yao and Lovley found a problem with Geobacter. It is an anaerobe, meaning it doesn’t breathe oxygen to survive, and prefers a healthy serving of iron oxide. They couldn’t feed Geobacter enough iron oxide to help it create enough nanowires to scale up the technology.

“The production of nanowire was the real bottleneck in the process,” Lovley told WhoWhatWhy.

The scientists overcame this obstacle when they found a different microbe to produce nanowires at the rate they wanted. E. Coli is an aerobe, preferring oxygen for survival. Luckily, oxygen is plentiful in our atmosphere. Now the Amherst team is able to harvest enough E. Coli to create the nanowires necessary to expand the production of Air-gen.

The original devices they created produced 0.5 volts of continuous energy, powering items such as LED bulbs. Since discovering the benefits of using E. Coli rather than Geobacter, the scientists have bigger plans.

The team has its sights set on flexible, nanowire-based sensors for biomedical application as well as batteries for health and fitness monitors, smart watches, and cell phones, eliminating the need for batteries and charging.

So when will this dream technology reach the market? Yao said that although there is usually a lag time between scientific discovery and commercial application, he hopes everything will move along quickly and smoothly for Air-gen. Yao anticipates that we will see Air-gen used to charge things in under 10 years.

“If we could create cheap electricity with sustainably produced electronic materials that would be incredible,” said Lovley. “We’re all desperate to find something to mitigate climate change. I really hope it will scale to the level where everyone could have an air generator to power their house, no carbon. It’s a totally carbon free system.”

“Harvesting green energy using green materials from everywhere itself is an attractive idea,” added Yao. “It does not require a scientist to understand the impact.”