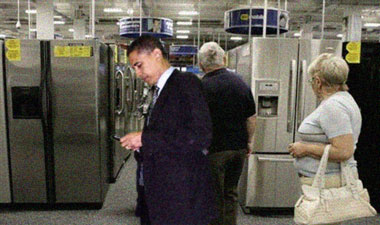 Picked this up from the NRDC blog. NRDC—Natural Resources Defense Council. (No, I don’t think that environmental nonprofits should be viewed with exactly the same skepticism as giant for-profit corporations)…. And, if NRDC is good enough for Larry David (arcane cultural reference to a show called “Curb Your Enthusiasm”) its kinda, sorta, sometimes, good enough for me.

while avoiding 36 million metric tons of CO2, 2000 tons of NOx, and 0.07 tons of mercury emissions, cumulatively. The CO2 savings are approximately equivalent to taking 7 million cars off the road for a year.

Even though these standards won’t affect room acs until 2014 (and dryers in 2015), they are a welcome addition given the hot and humid months ahead.

The standards match the levels recommended in a joint agreement between energy efficiency advocates, consumer groups and the Association of Home Appliance Manufacturers (AHAM)  The new standards are a big win for both consumers and the environment, and create a stable regulatory environment for manufacturers. We are very pleased to see DOE finalize this rule.

Makes you wonder, don’t it? It turns out the home appliance manufacturers are happy to create more efficient products. Or at least willing to do so. Therefore, what the heck was going on under Bush—when he felt it necessary to bring in people from all those industries to run the regulatory agencies and gut regulations that would supposedly destroy the companies?

The standards from room air conditioners are particularly beneficial. They will reduce the energy used by room air conditioners by around 10 to 15 percent (depending on the size of the air conditioner) – a savings in the need to build and run costly new peaking capacity.  The new standard also requires dryers to use 5 percent less energy and adds separate product classes for ventless electric compact dryers and combination washer dryers for the first time. The energy savings for both standards are equivalent to an estimated 75% of the energy used to dry clothes in all American homes in 2008.

Well, I can’t speak for everyone, but I’d be happy to save the energy I usually expend doing the laundry.

In addition to standards for room air conditioners and dryers, the consensus agreement with AHAM includes standards for other home appliances such as clothes washers, dishwashers and refrigerators which are current undergoing their own rulemaking proceedings. All of these standards, as well as other consensus standards for residential heating and cooling systems, portable electric spas, bottle type water dispensers and other miscellaneous products are also part of existing legislation called the Implementation of National Consensus Appliance Agreements Act or INCAAA  for short. INCAAA contains several different consensus agreements between advocates and manufacturers. The bill recently passed out of the Senate Energy and Natural Resources Committee and we hope to see it on the Senate floor early this summer.

All this talk about heating and cooling gets a little dry, doesn’t it? Still, there’s a point here—not all “big government” is quite as nefarious as our good friends (and loyal site visitors) the Libertarians would have it (uh oh—bracing for the comments to roll in)

Unless that legislation becomes law, though, DOE is required under a court ordered Consent Decree to set standards for room air conditioners and dryers and many of the other products covered in INCAAA by June 30, 2011. The Consent Decree resulted from a lawsuit NRDC and others brought against DOE for missing many previous statutory deadlines.

Oh. Those pesky lawsuits. Sometimes they do seem necessary.

DOE issued the clothes dryer and room ac standard as a Direct Final Rule, which is a new authority granted by the Energy Independence and Security Act of 2007 in which DOE can skip some of the rulemaking stages in instances where there is a consensus agreement from interested parties. While we are extremely pleased to see both DOE meeting its court ordered deadlines and setting this particular standard at the levels of the agreement, the direct final rule is a new procedure and so we will need to see exactly how it unfolds.

I love those (unintentional) laundry puns. “See…how it unfolds.”  Next job: writer for Larry David…

Just one final thought. Groups like NRDC are so happy to have a reasonably non-hostile administration in the White House, they de-emphasize the problems and emphasize the harmony. And why not?

But Donald Trump surely can give this whole thing a comb-over and see what’s amiss.