For Coney Island, Hurricane Sandy Was Just the Beginning

When Hurricane Sandy flooded the streets of Coney Island in Brooklyn, NY, in October 2012, Lola Star thought she was prepared for any damage to come. A local business owner for more than 21 years, Star operates two boutiques, one on the boardwalk next to the beach; the other on Surf Avenue, a block inland from the ocean.

“My store that was on the Coney Island boardwalk was the one that I was very concerned about, but it was basically untouched,” Star said. “I moved a lot of my merchandise to my Surf Avenue store because I thought it was further away from the ocean and that it would be safer.” It wasn’t.

“I had like six feet of sewage in there,” Star continued, “and it had to be completely redone, like just down to the brick. We had to tear down all the drywall, all of the merchandise was ruined. We lost everything there.” 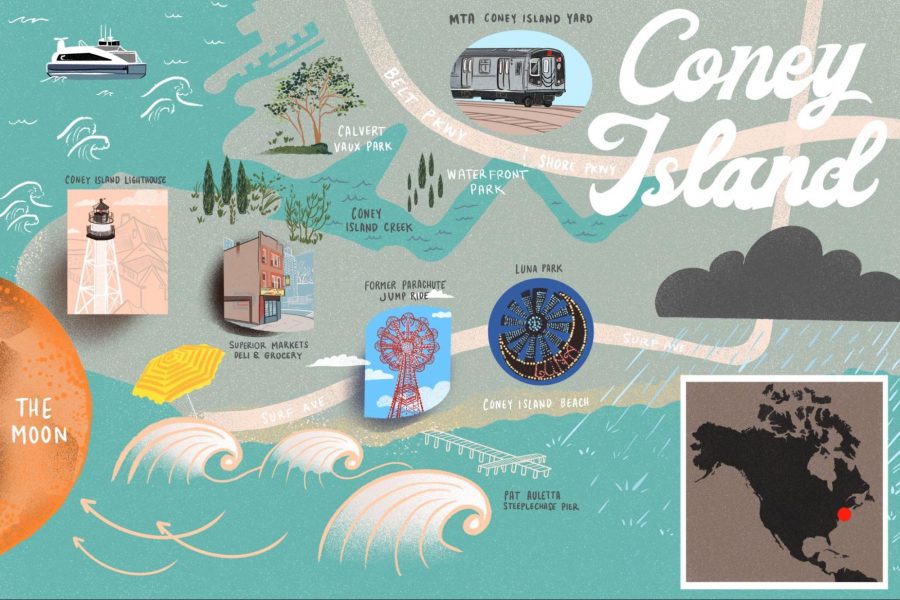 Star was far from alone. Hurricane Sandy left its mark all over Coney Island. The massive storm surge, coming at high tide during a full moon, merged with water overflowing from Coney Island Creek to the north and sewage from overflowing storm sewers to flood nearly the entire neighborhood, knocking out power to the generations-old public housing projects and nursing homes that dot the waterfront.

As cars floated down the streets, Sandy also knocked out power and flooded the emergency room at Coney Island Hospital more than a mile from the ocean, forced the evacuation of the local police precinct, and inundated area supermarkets.

Repairs took many years, but instead of discouraging further development, the city under Mayor Michael Bloomberg rezoned the mostly poor and working-class neighborhood to spur the construction of luxury housing near the ocean.

Nine years later, increasing storms and flooding have scientists and environmental experts worried that the area is becoming even more vulnerable to climate change. In the long term, the Regional Plan Association projects that with rising sea levels, more than half of Coney Island’s current population could be at risk of permanent inundation early in the next century.

Whether local property and business owners are paying more attention is unclear. Before hurricanes Henri and Ida swept by earlier this year, some placed sandbags in front of their stores to avoid potential flood damage, but most did not. Fortunately, neither storm caused much damage.

“I don’t think there was a ton of preparation,” said Alexandra Silversmith, executive director of the Alliance for Coney Island, a nonprofit organization working with independent businesses and stakeholders to rejuvenate the neighborhood. “I do think that Ida was much more of a wake-up call and we were very lucky that Coney island, again, wasn’t flooded, but I think at least for me [it] brought back a lot of memories of what Sandy was like, and the devastation it caused.”

Charles Denson, 68-year-old executive director of the Coney Island History Project and resident since 1956, is especially attuned to the changing nature of the area. Denson, who grew up in the west end of Coney Island, has witnessed the construction of massive high-rise housing projects and the decline in the amusement park area in the 1960s and ‘70s, as well as the more recent resurrection of the amusement park and the current push for luxury towers. “It’s a big change, mostly becoming residential now,” he said, “but it’s also a sandbar in the middle of climate change and global warming.”

Coney Island was once completely separated from Brooklyn by Coney Island Creek, making it the westernmost of the Outer Barrier islands, off of Long Island. Highway development projects in the early 20th century filled in a portion of Coney Island Creek, and with the construction of the Belt Parkway in the 1930s, the creek was further filled, shaping Coney Island into the peninsula it is today.

Chester Zarnoch, a professor in the department of natural sciences at Baruch College, cites another issue. Rising temperatures mean warmer water, and warmer water holds less oxygen for the organisms living in it. “That’s one of the biggest challenges in New York City,” he said, along with runoff from overtaxed wastewater systems.

Sea creatures can also die because of severe rainstorms. Organisms off Coney Island are acclimated to fluctuations in salinity, Zarnoch explained, but stormwater can introduce significant amounts of freshwater and sewage, at least for a short time, harming sea life.

Experts point out that mitigating all the environmental issues facing the Coney Island area is essential to keeping ecosystems balanced. “I’m more concerned about things like low oxygen, extreme temperatures, acidification of our waters, the synergistic effects of climate change and eutrophication,” said Zarnoch. “I think those are probably going to be the most important drivers on how our ecosystems work.” 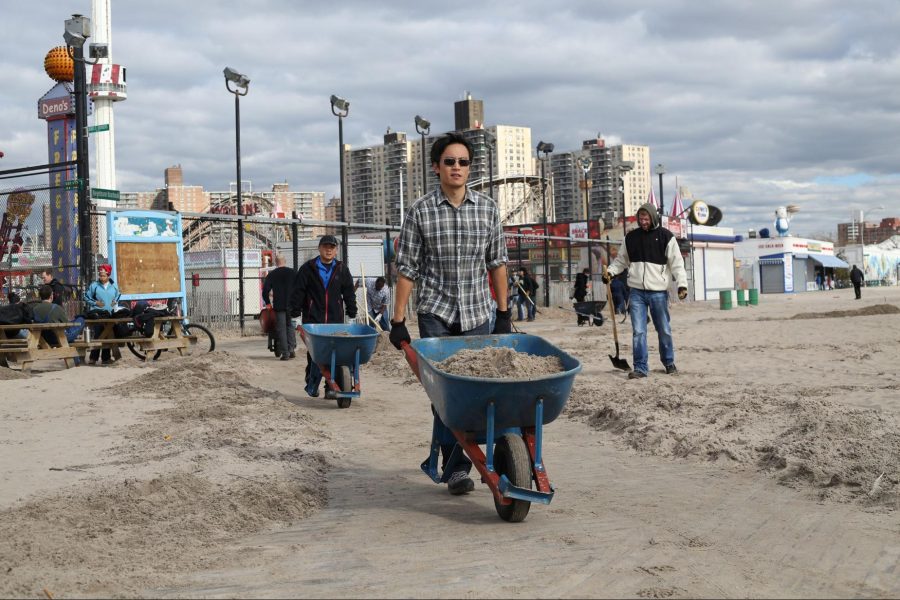 As one walks from the boardwalk inland toward Surf Avenue, the vibrant lights and colors of Luna Park dull into the browns of apartment complexes. Steel-gray construction scaffolding promises more buildings to come.

These new buildings cannot erase the memories of those damaged by Hurricane Sandy, many of which took years to rebuild.

“Most people know, but maybe not, the flooding really came from the Coney Island Creek side [the inland side of the peninsula] and not the beach, so it was from a different direction than anybody anticipated and really just hit anything that was on the first floor,” Silversmith said.

“Most of the [New York City Housing Authority] buildings had all of their mechanical equipment on the first floor, or maybe the basement, so they were all without power and without boilers for a very long time,” she added. “Literally for years, some of them had temporary boilers outside to provide heat and hot water. Obviously, [there was] tons of mold; it was devastating.”

Ali Sameer, a Coney Island native who works at Superior Markets Deli & Grocery on Mermaid Avenue, detailed how his own building was flooded. “I live in the upper floors of my building, but the basement was completely flooded,” he said. “The next day the water started to go away, but the damage was still there. Everyone had some type of damage.” 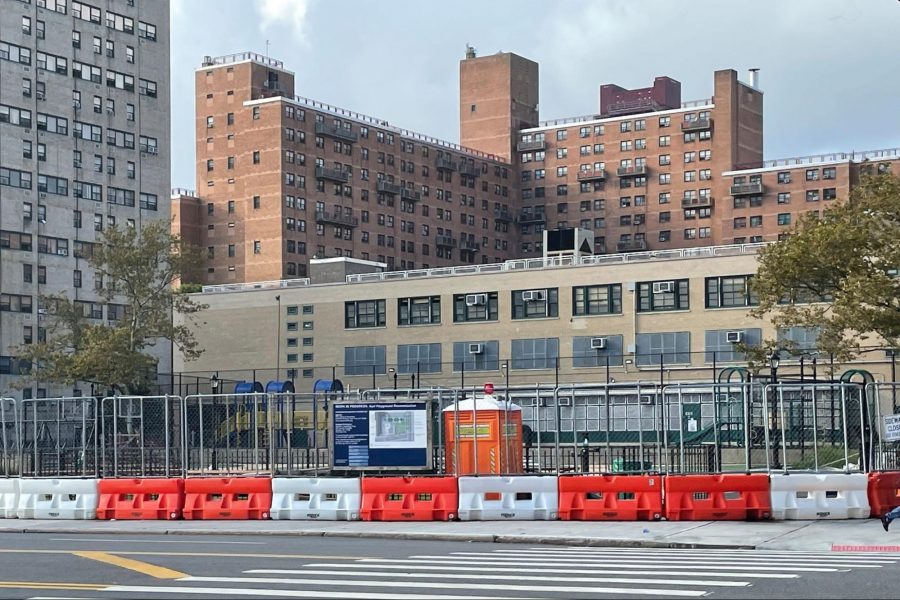 New housing construction. A local business owner we spoke to still hopes Coney Island will be developed in a way that helps the environment. Photo credit: Farah Javed / WhoWhatWhy

As in many areas affected by climate change, New York City officials had to decide how to help residents after Sandy. Under Bloomberg, the Mayor’s Office of Housing Recovery Operations launched the Build It Back program, and, according to its website, 12,500 families were aided in repairing or elevating their homes or moving. “Build It Back has rebuilt and elevated over 1,300 homes to today’s stringent regulations for flood compliance,” the office boasts, “to protect against future coastal storms and highly damaging storm surge, often elevating homes 10 to 14 feet.”

The program did not totally fulfill its mission on Coney Island.

Silversmith explained that private houses in the neighborhood are mostly attached, multifamily structures, and any protection against floodwater and storms must be agreed to and complied with by every homeowner in the row. As a result, many local homeowners opted to not take advantage of the Build It Back program. In addition, many of those who signed up for Build It Back eventually withdrew because of an assortment of issues that plagued the program.

Still, since 2012, New York has made flood resiliency a requirement for all apartment buildings, which means raising electrical, heating, and plumbing equipment and using water-resistant materials, according to the New York City Department of Planning. That provides at least some fortification against storms. Buildings erected in the past decade also have changed the risk of flooding because they can prevent water from reaching the streets.

The city’s Metropolitan Transit Authority (MTA) has also taken steps to help during climate disasters. The Coney Island Yard, where hundreds of subway trains are stored at very low elevations, was heavily damaged during Sandy, according to Projjal Dutta, the MTA’s director of sustainability. This yard alone accounts for one-third of transit services. Since then, the MTA has used government funds to pay for environmental projects, such as building temporary and permanent walls around the train yard as a defense against flooding.

Provided with sophisticated maps and data from climate change experts, the MTA can build in a large margin of error, allowing for plenty of protection, Dutta said.

“It uses a formula of “Cat 2 + 3,” he explained. “So a Category 2 hurricane, when you put that into a Geographic Information System map, you can find contours of where the water would come. What we end up doing is getting data from [the] New York City Panel on Climate Change (NPPC). They can say: by 2080, expect the water level to come up six inches, for instance. We take that and we then typically put a factor of safety on top of that. We say, oh, they say six inches. Let’s do 18 inches.”

Although climate change issues in Coney Island are now well known and protective measures are being taken, some residents see a city project to create a local ferry landing as a mistake.

Instead of constructing it on the ocean side, the New York City Economic Development Corporation [EDC] wants to transform the shoreline of Kaiser Park, along Coney Island Creek, with ferry service set to start by the end of this year. The small channel at the mouth of the creek would be dredged, which environmentalists fear will bring up chemicals and carcinogenic contaminants from a former dump site. 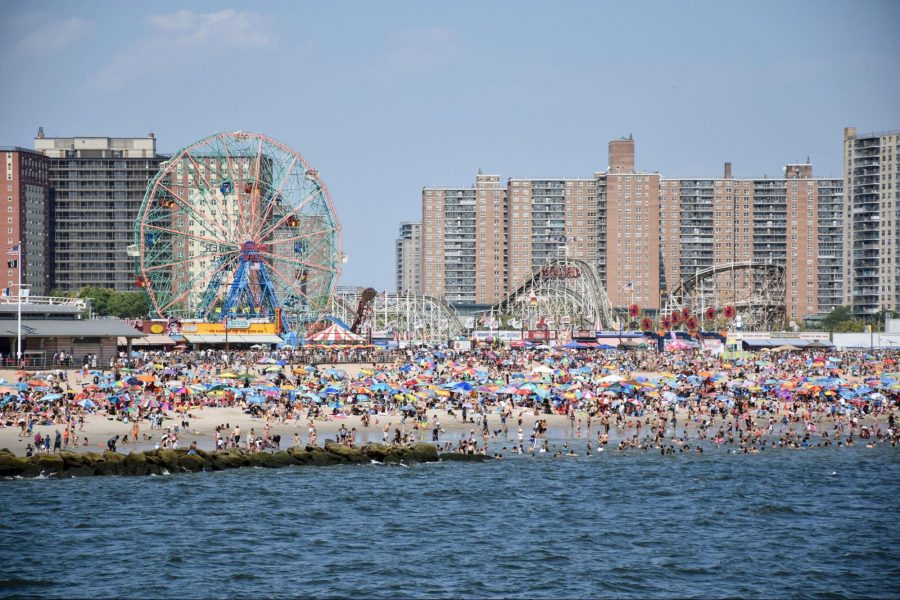 As of 2019, Coney Island had an estimated 115,000 residents, but the population swells each summer, when millions flock there for the area’s famed attractions, including Deno’s Wonder Wheel. Photo credit: Nikolas Moya / Flickr (CC BY-SA 2.0)

“The EDC is a private army and rolls over everybody,” Denson said. “They cherry-pick comments at meetings. This is the worst thing I’ve ever seen them do. The lead and mercury coming up in the water will poison our children.”

For years, schools, local organizations, and community members have gathered at Kaiser Park to learn about environmental issues concerning the Coney Island Creek estuary. With the completion of the city’s project, marine programs, community events like “My Estuary Day,” and the growing natural fauna in the estuary would disappear, according to Denson.

Boutique owner Star hopes that the new city administration will put the needs of Coney Island first instead of bending to the will of developers. “I truly do not think that EDC and the city of New York right now have Coney Island’s best interest at heart,” she said.

While she wishes that other businesses would be more active in supporting environmental issues, she is resigned to seeing climate change worsen.

“After Hurricane Sandy, I pretty much just had to come to terms with the idea that this will happen again and I have to be ready for it in the future,” she said. “And I know that I will overcome it if and when it happens again. … Hurricane Sandy was not just a once-in-a-lifetime thing. I think that that is something that we’re going to have to deal with in Coney Island again, unfortunately.”