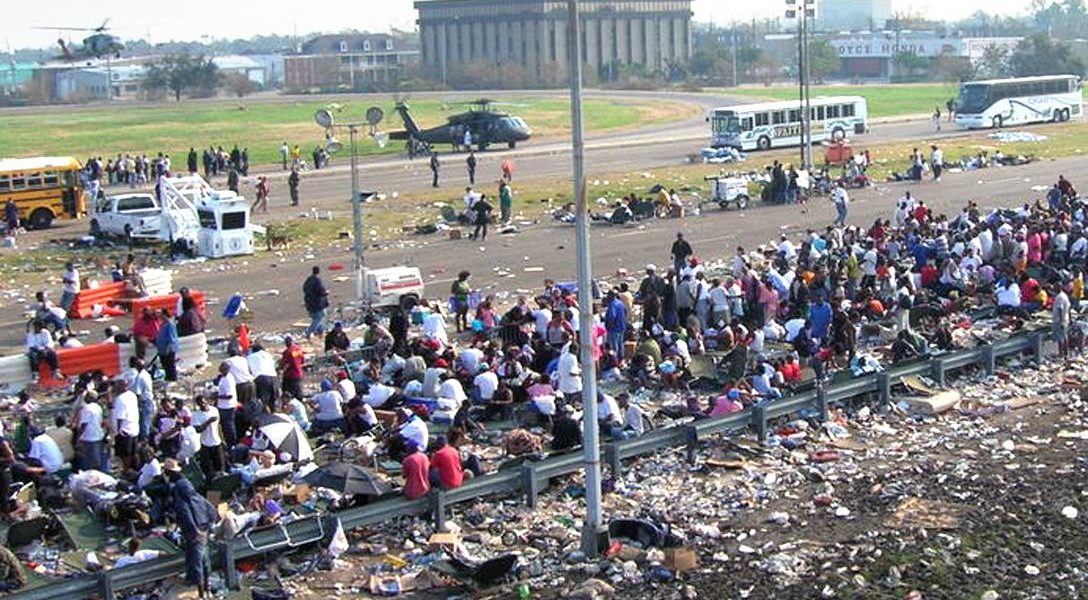 Eyewitness Account of Hurricane Katrina from a WhoWhatWhy Editor

A week after Katrina forever changed New Orleans and the lives of tens of thousands of its citizens, I was standing on the campus of LSU in Baton Rouge, leaning against a rental car that I had used to get around in Louisiana and talking to a young woman. And then I dozed off … while I was speaking.

I had come to New Orleans the day after the levees broke. At the time, I was working for a wire service and was asked to cover the aftermath of the storm. So I flew to Baton Rouge, somehow managed to get a rental car and made my way to New Orleans via the Mississippi River Bridge — which was the only way to access the city by car.

The distance between the two cities is only 80 miles — it seemed like much more than that. It felt as though I had left the United States of America and found my way into a post-apocalyptic alternate reality.

The way back was even more surreal but I don’t want to get ahead of myself.

The journalists covering Katrina were set up on Canal Street. Life for the print journalists was a bit more difficult than that of the TV people, who lived in fancy RVs with generators. I slept in my rental car and got next to no sleep because it was so hot and I didn’t want to run the air conditioning since I didn’t know where my next tank of gas would come from.

Still, my situation was infinitely better than that of the people who called New Orleans their home.

There were tens of thousands who hadn’t evacuated. It’s easy for outsiders to talk about personal responsibility and how residents should have left when they had a chance. However, put yourselves in their position: Many of them were people who didn’t have much and they lived in areas with high crime rates. It is understandable that they did not want to leave.

In addition, it would have been very difficult for anybody to imagine how bad it would be. I was there and I still can’t believe it. Entire sections of the city were under water, there was smoke from burning buildings and cars crushed by falling bricks.

It was most eerie at night.

Because of the heat, I could only fall asleep early in the morning when the city had cooled down a bit. So I would just try to get comfortable in my rental car — in the middle of a city of 500,000,it was absolutely dark and quiet. There was no electricity and there were hardly any people — at least not in the sheltered and protected area where the journalists stayed.

There were tens of thousands in the Superdome and the Convention Center. They were hungry, thirsty, tired, and desperate. They had pure survival on their minds. Many of them now knew that their possessions were lost. They kept getting their hopes up about being able to leave this nightmare. In light of all that, it is remarkable that there was not more violence and more chaos, especially considering the mix of heavily armed soldiers, officers of the law, vigilantes and citizens who roamed the streets during the day.

It was a very volatile situation. I never felt safe the entire time I was there. Ten years ago, I put it this way: “While I have not yet been in imminent danger, I always have the sense that threats to my life and that of others are just moments away and could lurk around every corner.”

I was in the enviable position that I could have left at any time, so I didn’t experience the same sense of desperation and loss that the residents felt. Those long, quiet nights also allowed me to reflect. The questions I asked myself back then are still valid today.

How in the world could something like this happen in the richest country in the world? How could New Orleans turn from a vibrant city into an enclave of lawlessness (some of the looting certainly for basic needs) within 48 hours? The speed with which the Big Easy plunged into chaos from being one of the most fun cities of the world was staggering. What does that say about humans and our ability to deal with stress?

It’s tough for those of us on the ground to evaluate the federal response. I think governments on every level failed New Orleans, although that failure wasn’t total. Some things worked … like getting a massive number of forces into the city quickly. As a decision maker, I would have sent in soldiers, too, once I realized how much I had failed the people and how desperate they were. It certainly seems as though the government was much more efficient in “keeping order” than providing help.

There was an understandable disconnect between journalists covering Katrina and New Orleans residents suffering through it. That once again became clear to me when I left for Baton Rouge. I gave three people whom I met a lift. Nothing more than that. However, to them it seemed as though I was saving their lives and they said as much. While I felt danger and unease as an outsider, they believed that their lives were on the line.

Being back in Baton Rouge might have been the weirdest part of my trip. After driving just one hour (speeding by cops wasn’t a problem. I left New Orleans going the wrong way on a bridge and the officer in the cruiser on that bridge simply gave me a friendly wave), I went from a desolate place without electricity and running water to a normal American city. At its outskirts, there was an office building with a large water fountain. After just a few days in New Orleans, that seemed crazy to me. I actually had the urge to stop and jump in there since I hadn’t had a shower in a week. Just past it was a fast food restaurant — the most normal thing in the world to see. But the idea of paying a dollar and instantly getting a warm sandwich seemed like an alien concept to me.

I experienced what the United States must look like to immigrants from the poorest nations on Earth. It’s a country of abundance — and it still failed its citizens in need, an hour to the south. To me, it was the toughest week of my life. I left so physically and mentally exhausted that I fell asleep while standing up and talking. And I was merely a visiting observer. Even though I saw the survivors in the Convention Center, I’d never presume to know what they went through.

The response to Katrina is a blemish on America’s history. Ten years later, it is important to learn from the lesson the storm, and its aftermath have taught us. To me this means that when humans go up against the forces of nature. Nature will always win, so we better treat her right. It also means that there is a place for government in our lives, because there are some things only a government can do. If the government fails, chaos ensues.