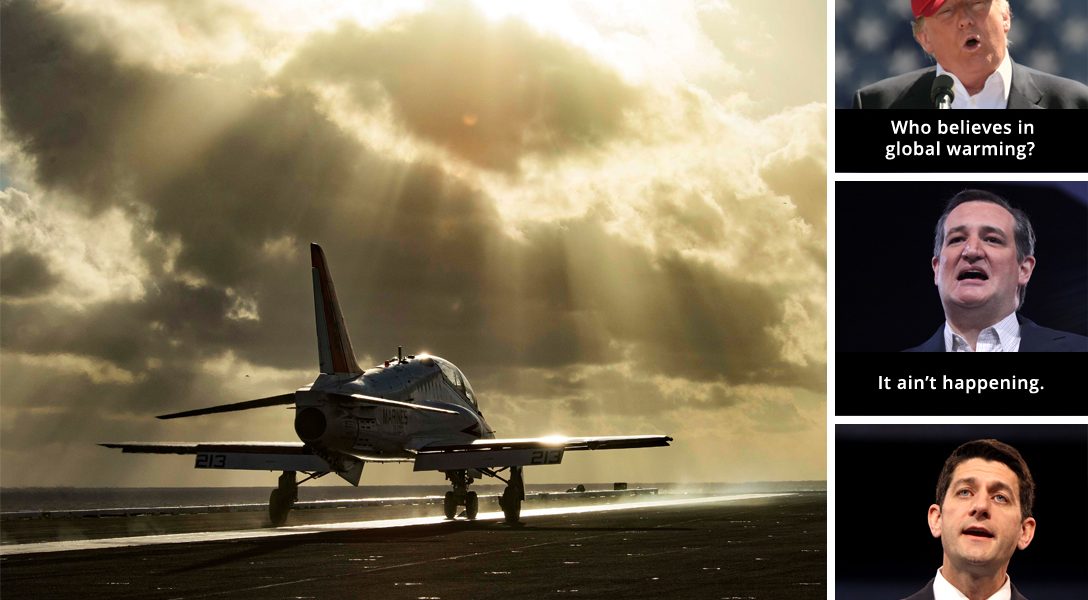 When Donald Trump was asked about climate change in his meeting with the Washington Post this week, he first gave the standard Republican responses. He noted that he is not a “great believer” in man-made climate change and that the weather is constantly changing.

But when asked whether he, as a businessman, would not support taking steps to hedge against such a potential risk, Trump said something truly interesting:

Why is his answer so interesting? Because, unwittingly, Trump exposed a major flaw in the GOP’s position that climate change either doesn’t exist or is not a big problem anyway.

What Trump seems unaware of is that the military, generally praised by Republicans, has concluded that  climate change is very real indeed and a tremendous risk to American security.

In January, the Department of Defense (DoD) released a directive that outlines the following policy:

climate change in order to maintain an effective and efficient U.S. military. Mission planning and execution must include:

a.  Identification and assessment of the effects of climate change on the DoD mission.

b.  Taking those effects into consideration when developing plans and implementing procedures.

c.  Anticipating and managing any risks that develop as a result of climate change to build resilience.

That is not the first time DoD has indicated that it not only views climate change as real but also treats it as a threat to global stability.

Last July, a Pentagon report said “DoD recognizes the reality of climate change and the significant risk it poses to U.S. interests globally.” The document reiterates that

“climate change is an urgent and growing threat to our national security, contributing to increased natural disasters, refugee flows, and conflicts over basic resources such as food and water.”

That report was delivered to the Senate, which includes many climate change deniers, such as Majority Leader Mitch McConnell.

GOP: What, We Worry?

It would be easy to dismiss the Pentagon’s recent focus on climate change as politically motivated. After all, the commander-in-chief is a Democrat who agrees with the vast majority of experts that the planet is warming at dangerous levels.

However, the military’s interest in global warming is not a recent development. In fact, it predates the inauguration of Barack Obama.

In 2004, The Guardian unearthed a Pentagon analysis that painted a gloomy picture of the effects of climate change. The document predicted that global warming would eclipse the threat of terrorism.

In analysing the effects of a warming planet, the DoD said: “Disruption and conflict will be endemic… Once again, warfare would define human life.”

Contrast that with the statements of Sen. Ted Cruz (R-TX), who is currently second behind Trump in the race for the Republican nomination.

He also accused government researchers of “cooking the books” to make the data fit their own beliefs.

To its credit, Time Magazine ended the article with a dose of reality: “Science, however, does not back up Cruz’s position. Geochemist James Lawrence Powell, an adviser to Ronald Reagan and George H.W. Bush, reviewed peer-reviewed science journals and found that only two articles rejected climate change during 2013. His sample size: 10,885 articles.”

WhoWhatWhy reached out to the Trump campaign as well as the offices of Sens. McConnell and Cruz and asked them about being at odds with DoD on climate change. At press time, none of them had responded. However, this story will be updated as soon as they comment.

Unlike Donald Trump, McConnell and Cruz cannot claim that they are unaware of the Pentagon’s position. After all, Republicans in Congress last year attempted to slash funds for DoD and Central Intelligence Agency climate research. The House Republican budget memos listed the programs under “examples of areas where there should be room to cut waste, eliminate redundancies and end the abuse or misuse of taxpayer dollars.”

House Speaker Paul Ryan’s (R-WI) views on climate change align with those of most Republicans.

“Climate change occurs no matter what,” Ryan, another pro-military Republican, said in 2014 prior to ascending to the speakership. “The question is, can and should the federal government do something about it? And I would argue the federal government, with all its tax and regulatory schemes, can’t.”

At press time, Ryan’s office had not responded to a request for comment on whether DoD is wrong to make climate change a priority.

While Republicans portray themselves as the staunchest defenders of a strong US military, it appears that their support ends where the interests of some of their biggest donors begin.

Under the previous two administrations, the Pentagon has warned against the effects of climate change, in particular rising sea levels and the resulting consequences of forced migration from coastal areas and a heightened competition for natural resources, including fresh water. But while DoD is siding with the scientific consensus on the issue, Republicans leaders continue to stick with Big Oil and Big Coal.