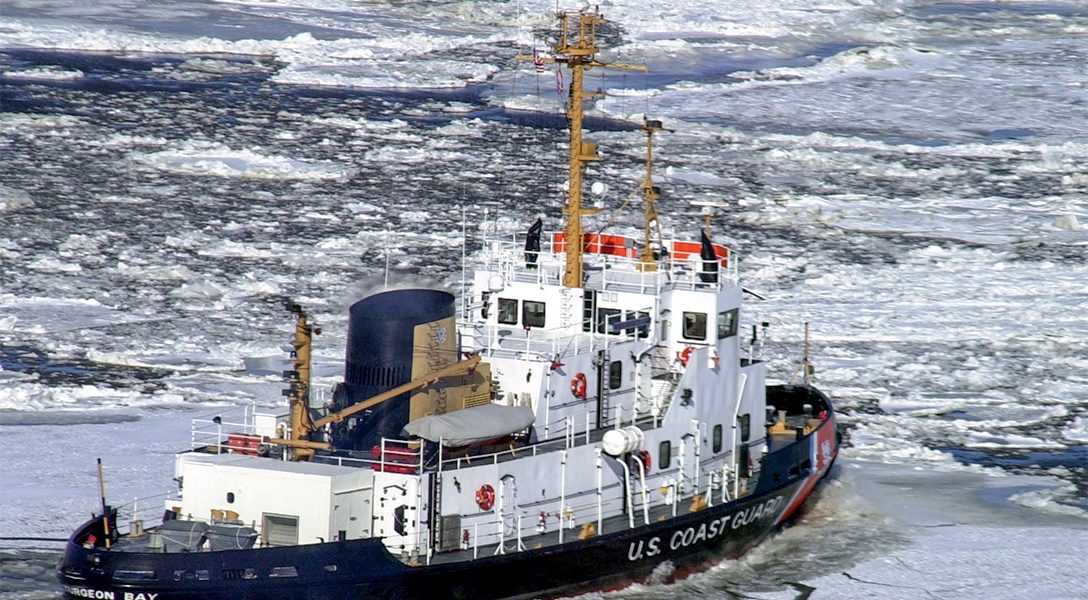 In the first of our three-part climate investigation, we showed why you don’t need to go far north to see evidence of climate change—it’s happening even in Florida. But if you do go north, you may soon rub elbows with oil companies.

Certainly the Pentagon knows the earth is getting hotter. Here’s what US Coast Guard Commandant Admiral Robert J. Papp wrote in the February 2012 issue of Proceedings, the magazine of the US Naval Institute:

“The world may seem to be growing smaller, but its seas are growing bigger—particularly in the great North, where a widening water-highway beckons both with resources and challenges.”

The Admiral, while ignoring issues of causality, continued:

“The Arctic Ocean, in the northern region of the Arctic Circle, is changing from a solid expanse of inaccessible ice fields into a growing navigable sea, attracting increased human activity and unlocking access to vast economic potential and energy resources. In the 35 years since I first saw Kotzebue, Alaska, on the Chukchi Sea as a junior officer, the sea ice has receded from the coast so much that when I returned last year the coastal area was ice-free. ”

Recognizing the truth of Admiral Papp’s statement, the Navy is gearing up for an ice-free Arctic Ocean in the summer months as soon as 2016—84 years ahead of conventional model projections.

This estimate is the result of an ongoing US Department of Energy-backed research project led by a US Navy scientist at the US Naval Postgraduate School‘s Department of Oceanography, Professor Wieslaw Maslowsky.

The Republican House-led Armed Services Committee relied on the Navy’s research, too, but used older data that put the date several years further off. Still, even with outdated estimates, the Committee’s comments on the 2014 National Defense Authorization Act (NDAA) refer to a future ice-free Arctic Ocean that will occur alarmingly soon:

“The committee continues to be concerned about the Department of Defense’s resources and preparedness for accessing, operating in, and protecting national interests in the Arctic. The Navy currently estimates that between 2020 and 2030 the Arctic could be ice free for one month during the summer which may lead to an increase in trans-Arctic passage for vessels seeking to reduce transit distance by utilizing the Northern Sea Route and the Northwest Passage. The Navy’s Strategic Objectives for the Arctic …include ensuring Navy forces are capable and ready, contributing to the safety, stability and security in the region, safeguarding U.S. maritime interests, protecting critical infrastructure and key resources in the Arctic, and strengthening and fostering new cooperative relationships in the region. As a global Nation, the United States needs to ensure that the Navy is adequately prepared to preserve U.S. national security interests and collaborate with other Arctic nations if and when the region will be open for passage with increased traffic.”

Even with the later predicted ice-free date, this is pretty unambiguous stuff, and yet, incredibly, the Republican majority on the House Armed Services Committee is stacked with people who are climate change deniers. That includes the committee chair, Rep. Howard “Buck” McKeon (R-CA), who scored a 3 out of 100 on the League of Conservation Voters Environmental Scorecard (his lifetime record is 8).

In 2011, even as the nation’s midsection and its “salad bowl” in Central California were beginning to suffer an epic drought that scientists link to climate change, McKeon introduced an amendment to bar the Agriculture Department from implementing a climate change adaptation plan. McKeon also voted against a bill that would have allowed the Environmental Protection Agency to enforce limits on greenhouse gasses by utilities. WhoWhatWhy’s efforts to speak with McKeon or one of his staffers on the Armed Services Committee have been ignored.

But McKeon is hardly alone. It has been 24 years now, almost a quarter century, since the first International Panel on Climate Change (IPCC) issued its report warning that human activity, and in particular the burning of fossil fuels, was dangerously heating up the planet. Since that time, the US government has done little to slow the growth of the nation’s carbon emissions, and has consistently played an active role in blocking international agreement on measures to slow global warming.

President Obama, who promised shortly after winning election in 2008 to begin a “new chapter” on climate change, has done little, even early in his first term, when Democrats controlled both houses of Congress.

Behind Washington’s appalling record of inaction lies the politically powerful fossil fuel industry, which has spent hundreds of millions of dollars on campaign contributions and lobbying over the last two decades in an effort to block any limits on carbon emissions. In the 2012 election cycle alone the industry spent over $153 million on TV ads promoting less regulation, and more oil, gas and coal production.

Not surprisingly, the president and Congress have done little over this time to limit fossil fuel use in the US, and the results have been predictable: between 1990 and 2011, US carbon emissions were up 8 percent (the number would have been higher but for the prolonged and ongoing economic slump, which has reduced economic activity, driving miles and air miles flown and electricity use and thus carbon emissions.

Oil Companies Want it Both Ways

Still, the US remains far and away the largest producer of greenhouse gasses after China, and the largest producer by far on a per capita basis: 16.4 tons per person for the US in 2012 compared to 7.1 tons for China, 12.4 tons for Russia, 10.4 tons for Japan, and 9.7 tons for Germany. The global average that year was just 4.9 tons, and the only country exceeding the US in carbon use per capita was Australia at 18.0 tons per person.

Meanwhile, as the Navy plans for an expanded role in an ice-free far north, oil companies, including ExxonMobil, ARCO, Chevron, BP, Norway’s Statoil, Russia’s Gazprom, and Shell, are gearing up to begin drilling for oil and gas in parts of the Arctic Ocean that are already becoming free of ice in summer months. These major players know that even in winter, the returned ice sheet will be manageably thin in coming years. They are also even covetously looking to drill in the soon to be ice-free parts of Greenland.

In other words, oil company scientists are on one hand assuring them there’s big money to be made tapping the vast oil and gas reserves known to lie beneath the shallow Arctic waters now being relieved of their ice cover for the first time in millions of years. On the other hand, these same companies are simultaneously lobbying Congress to sow doubts among the public about the true impact of climate-change situation.

As for the public sector, how can Congress and the Obama administration, who know that the Navy is gearing up to patrol and defend a whole new coastline and vast new stretches of heretofore inaccessible territorial waters north of Alaska, keep failing to adopt even minimal efforts to slow climate change by working to limit the burning of fossil fuels in the US?

It’s not as if this kind of double-dealing has no costs. A consortium of 18 environmental organizations, which includes groups like the Sierra Club, the Environmental Defense Fund, and the League of Conservation Voters, wrote in a Jan. 16 letter to President Obama that his administration’s “all of the above” approach to boosting domestic, including Arctic, exploration for more oil, more gas and increased coal for export, was unacceptable in view of the growing climate change crisis:

“An ‘all of the above’ strategy is a compromise that future generations can’t afford. It fails to prioritize clean energy and solutions that have already begun to replace fossil fuels, revitalize American industry, and save Americans money. It increases environmental injustice while it locks in the extraction of fossil fuels that will inevitably lead to a catastrophic climate future.”

Meanwhile, the American Petroleum Institute announced that same day that it was launching an ad and lobbying campaign to promote increased gas and oil exploration in the US. A report by the API, called “The State of America’s Energy: America’s Energy, America’s Choice,” pointedly notes that Alaska’s outer continental shelf–increasingly ice free and presumably accessible to drilling–contains an estimated 26 billion barrels of oil, but that at this point most of it is not being made available to energy companies for drilling.

I called API to ask how oil industry executives could be hearing from their own scientists that the Arctic ice cap is vanishing while continuing to lobby against any efforts to limit carbon emissions: “Are they simply ignoring the evidence, or is it a case of a thirst for near-term profits overriding any concern about the survivability of life on the planet for their own offspring?”

The media relations executive, Brian Straessle, while saying he would try to get me someone to talk to from API (so far nothing on that front), offered as a justification for this seemingly oxymoronic behavior, the claim that US carbon emissions in 2012 had fallen to an 20-year (sic — it’s 18) low “because of a shift to burning natural gas.”

When I replied, “Well, I think it was mostly because of reduced economic activity from the long recession, right?” I was met with silence.

It is true that temporarily cheap natural gas has led to some shifting by utilities away from coal, a much worse producer of carbon dioxide, and that this switch to gas did cut US production of CO2. But the bulk of the estimated 3.8 percent decline in carbon emissions in the US in 2012 was the result of continued lower economic activity, and to cutbacks in energy use by financially strapped Americans.  Moreover, there are warnings that once natural gas prices rise again, as they inevitably will with any global economy rebound, utilities will shift back to more coal burning. This would make the downturn in US carbon emissions a short-lived phenomenon. (Also, there’s the unmentioned impact of leaked methane in the mining and use of gas and oil, which releases into the atmosphere a chemical that is 23 times as potent a global warming agent as CO2.)

The reality, as the Pentagon and oil industry executives know, is that climate change is progressing with frightening rapidity—and if the Arctic ice sheet vanishes in summer, with that vast reflective whiteness replaced by dark, solar energy-absorbing water, that pace will increase dramatically. The reality, too, is that sea levels along parts of the Atlantic seaboard have risen significantly since the 1930s, forcing places like Miami Beach to engage in costly major projects to stave off their inevitable future as new Atlantises. According to one expert at the University of Florida, Prof. Harold Wanless, increasingly rapid ice melting on Greenland’s two-mile-thick ice sheet, and evidence that the much larger West Antarctic ice sheet is beginning to melt, could mean a devastating 15-foot global sea rise by as early as 2100, instead of the 3-6 foot predictions that are more commonly cited (bad as those would be).

This may all be perceived as great news for a water-enamored Navy, but for the rest of us, especially the hundreds of millions who live near coastlines, it’s nothing less than catastrophic.

Coming soon in our series: Washington’s weird way of sidestepping the causes of climate change.