Miami Beach – Len Berry was relaxing with colleagues on a hotel patio here one evening last October when one of them shouted, “Look! It’s happening!”  Peering over the railing, the group could see water pushing up onto the street below from storm sewer drains – something that thanks to sea level rise has been happening with increasing frequency in this low-lying resort city. Berry, director of Florida Atlantic University’s Center for Environmental Studies, says he and the others were in town to attend a conference on climate change when they got this first-hand view of the crisis.

Far north of Florida, skeptics of the chaos caused by climate change are rare. The denizens of Alaska, Siberia, Scandinavia, Greenland and northern Canada have been witnessing firsthand the frightening effects of a rapidly heating Earth: Lakes and shallow seas bubbling with methane, the Arctic Ocean’s icecap shrinking, soon to vanish altogether in summer, “drunken forests” whose tree roots once sat firmly atop permafrost, now wobbling helplessly on mud. They know what’s happening.

But in America’s Lower 48, there are still plenty of climate-change naysayers. In Florida, you will find fewer and fewer of them, though, especially along the state’s long, low-lying coastline. The evidence of climate change is getting harder to ignore down here, too.

The playground city of Miami Beach may seem an unlikely place to spot such radical changes. But at its greatest elevation this heavily developed island sits just four feet above mean sea level. Much of the land is even lower and these days it gets inundated when the tide is high.

I went there earlier this month to check out a 10-block stretch of Alton Road, also known as State Road 907.  It is a massive construction project at the moment, with the pavement all torn up and removed, and huge sections of concrete conduit stacked along the closed roadway, where they will eventually be laid in place well below sea level.

The reason for this hugely disruptive $38-million, one-to-two-year project is that this road, at an elevation of about one foot above current mean sea level, has become routinely subject to flooding. 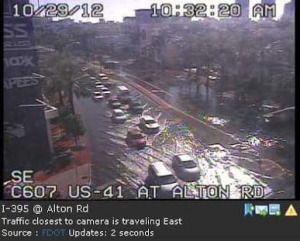 During the so-called “King Tides” in spring and fall, when moon and sun are aligned to produce the highest tides, the rising sea pushes its way up through the storm sewer and drains onto the street.

Thanks to melting polar ice and a warming ocean the local sea level is up about 10” since the 1930s, when the original storm drains were installed. As a result, this flooding has lately been happening with ordinary high tides—even in December when high tides are lowest.

Water Down the Drain… or Money?

I asked the supervisor of a crew digging beneath the roadbed what was being done to combat this climate-induced problem.  “We’re putting in bigger drainage pipes and installing three big pumping stations to push the water off the street and out of the drains quickly,” he said.

When I asked him how long this costly fix—part of a larger $200-million flood-control project across the city—could be expected to work as the sea continues rising, he laughed wryly. “I cannot say. I’m just doing what the engineers told us to do. But if the sea keeps rising, this project won’t keep working.” The supervisor declined to provide his name.

That’s precisely the level the National Oceanographic and Atmospheric Administration (NOAA) says the sea will rise by the end of this century, if the Greenland ice sheet keeps melting.

One University of Florida study—based on 2007 data projections for a relatively moderate 4.5-foot rise in sea level, which some analyses say could occur later this century—predicts a loss at that point of $66 billion worth of real estate in south Florida.

The imminence of this threat is not lost on insurance companies, and they aren’t waiting to see whose sea level estimate proves most accurate. They are already jacking up their home and project insurance rates—sometimes by a factor of 10—or are simply exiting the Florida market.

The company has also dropped 320,000 homeowners’ policies since that year, and it’s not alone. Mercury Casualty has bailed out of the Florida home insurance market, and AAA no longer offers homeowner policies to Auto Club members, except as a package along with their auto insurance.

This comes as the Florida housing market, hit hard when the fiscal crisis struck and the housing bubble popped, is beginning to climb back from the collapse that began in 2008. Plenty of cranes can be seen working again on high rises in Miami, Fort Lauderdale and other Florida coastal cities, but it is development with a difference this time. Developers and realty companies are quietly turning to experts for “real” estimates on sea level rise and its likely impact on specific potential development sites.

“They are basing their projects now on a planned 10-year return-on-investment,” says Professor Harold Wanless, who, as chair of the Department of Geological Science at the University of Florida, is among those being asked privately about sea-rise project risk. Wanless adds that homeowners, too, know that their properties will eventually become worthless, but for now they are playing a risky game of musical chairs, hoping to sell high before the music stops, leaving some other buyer to take the hit.

Wanless, 70, owns a home near the shore himself, and says he has already warned his children that they cannot count on inheriting an asset from him in the form of property.  “Fifteen years ago, I never thought about this, but I have to admit that my house is not an investment my family can rely on,” he says.

NOAA has four projections for sea level rise by 2100, ranging from a conservative one-foot foot rise just from expanding warmer water (this has already been reached 86 years early), to a 6.5-foot rise that assumes a significant Greenland ice-sheet melt. But Wanless thinks even that is too low.

“I think it’s more likely, given what we are learning about the way ice melts, that the melting rate on Greenland will keep accelerating, and that we’ll also have increased melting of the ice in Antarctica, which would give us a five meter (over 15-foot) sea level rise by 2100,” he says.

Such a rise—or even NOAA’s 6.5-foot rise—would be catastrophic and property values in the state, especially along the vulnerable coastline, are almost certain to fall at some point.

Wanless and Berry say they would expect this to happen suddenly as a result of the first disastrous storm—not gradually.

In recent years, Florida has been lucky in not having been hit head-on by a major hurricane along its southeastern coast. A storm like that could push a 20-foot surge of water on top of whatever tide rolls in, and that would sweep over low-lying islands like Miami Beach and on into the major cities like Miami or Fort Lauderdale. The effects would be devastating.

“After such a catastrophe, reality would set in,” predicts Wanless, if only in the form of impossibly high or unobtainable insurance.

The public attitude in Florida is complicated, as Berry explains:

On some level, people realize in this state that they need to plan for a different world because of climate change. That’s why we have the four-county Southeast Regional Climate Change Compact here (the members are Palm Beach, Miami-Dade, Brower and Monroe). We don’t have many climate change deniers in Florida, but at the same time it’s still kind of in the background. There is a lot of “Oh well, it’s a nuisance, but we don’t need to do something right now. We can deal with it down the road.”

But a sea rise in Florida doesn’t have to be dramatic to be devastating. Even a two-foot rise, which could be reached as early as 2040, would do the trick. 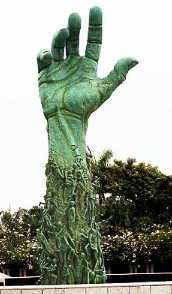 Why? For one thing, the entire Florida coast, where most people live and where most cities are located, is only a few feet above sea level. That’s enough to wreak havoc with the coastal region’s water, sewer, highway and electric infrastructure, with impacts ranging well inland.

This is because the whole of south Florida is basically the remnant of an ancient coral reef once submerged under a shallow sea. The “bedrock” is composed entirely of porous limestone. Pick up a chunk, fix your lips on it and blow, and you will hear and feel air coming out the holes on the other side. (Visitors who kayak or canoe in the Everglades can see this fossilized coral through the clear shallow water.)

As the sea rises inexorably, it will push unseen through this inland bedrock, salinating the Biscayne Aquifer that provides most of the fresh water for farms and for the region’s 5.7 million people. The limestone, which Berry says is so porous, is “50% air,” makes it impossible to build Netherlands-style dikes to keep out the sea; the ocean would simply percolate up behind the walls.

The president has made stirring speeches warning about looming climate change, but in the face of industry opposition and Congressional foot-dragging, neither he nor Congress has done much to limit carbon emissions. In the face of mounting evidence that climate change poses the biggest threat to mankind in the history of our species, little of consequence is being done in Washington.

If our elected leaders won’t travel north to the Arctic Ocean or the Greenland ice sheet, to see the melting going on for themselves perhaps they could at least go south to Florida. Seawater bubbling through sewers in Miami Beach may not be as dramatic as rivers of ice-melt gushing through deep canyons carved in the Greenland ice sheet in mere weeks (something which wasn’t happening a decade ago), but it’s bad enough. And as Florida residents will tell them, it’s going to get a whole lot worse.

In Part Two: While Washington dawdles on dealing with climate change, and politicians pocket donations from energy companies seeking to block efforts to limit carbon emissions, the Navy is making plans to patrol and defend an iceless Northwest Passage. And oil companies are already gearing up for major drilling in what their own scientists assure them will soon be ice-free waters in the Arctic Ocean.

57 responses to “Part 1: To See Climate Change in Florida”