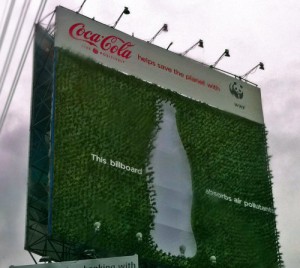 Cool billboard, but Coke still ain’t good for you

We’ve got mixed feelings about the World Wildlife Fund, which has tended to excessive coziness with big corporations. But sometimes, something good comes out of that chumminess. For example, this:

The overall billboard is green too. The bonsais are held in 3,600 pots fashioned out of old coke bottles. The plants grow out, sideways. According to Adweek, the potting mixture comes from organic fertilizers and industrial byproducts.

No explanation of why this happened first in the Philippines, or when we might expect Coke culture to begin soaking up the LA smog.

Anyway, we judge this way cool, and look forward to seeing whether the perennially competitive Pepsi will post billboards with twice the positive impact.

And by the way, we still hate billboards and crass consumerism.

Have a nice day.