BEIRUT — Protesters attempted to storm the Beirut residence of Lebanon’s prime minister-designate on Sunday afternoon as frustrations mounted over deteriorating conditions in the country and opposition groups called on government leaders to resign.

The protests came on the heels of an early morning explosion at a fuel tank in the northern town of Akkar left at least 20 dead and 70 wounded, exacerbating outrage over a major fuel shortage caused by the central bank’s decision last week to cut fuel subsidies. The army reportedly had seized the fuel tank from black marketeers when the explosion occurred.

The attempts to raid Prime Minister-designate Najib Mikati’s residence in downtown Beirut followed a successful attempt by protesters to storm the home of MP Tarek El-Merhebi. Protesters overturned furniture and destroyed belongings as they searched his apartment. Merhebi was not present at the time.

Protesters smashed windows and threw stones and debris at police as they attempted to force their way into Mikati’s residence. Firing tear gas and then charging with batons, police pushed protesters to the street, where both sides engaged in physical clashes. 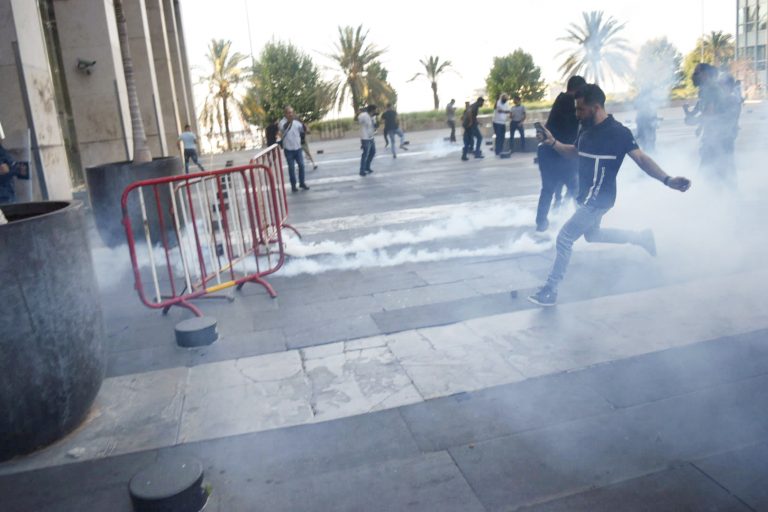 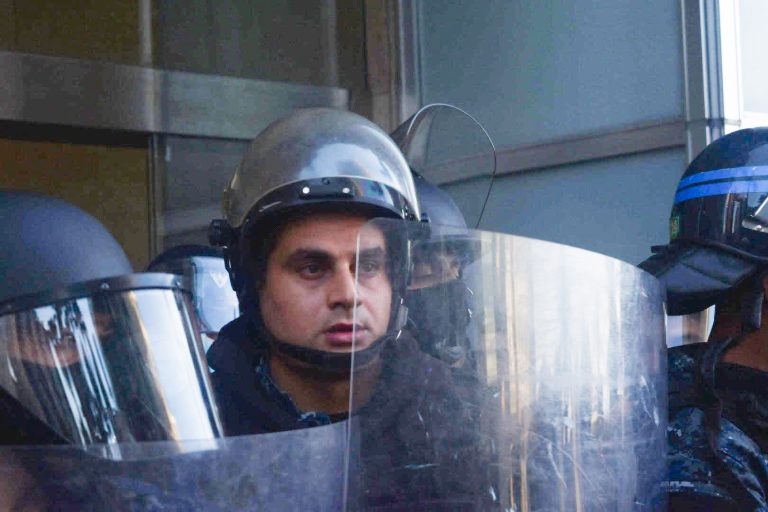 As protests continued, military troops came to re-enforce police. Armored vehicles equipped with machine guns also arrived shortly after. With protesters sandwiched between riot police on one side and armored vehicles on the other, police charged the protesters, dispersing them.

“We are here to say we are refusing everything that is going on,” said Pascale Bader, a nightclub manager.

She and other protesters are outraged by the government’s continued failure to provide services and enact reforms that will solve the array of crises facing Lebanon. “Really this is an insane country. They are just killing the people, either with hunger or explosions.”

Protesters demanded that Mikati and President Michel Aoun resign and for the Parliament to lift immunities on officials sought for an investigation into the Port of Beirut explosion that killed over 200 people and ravaged the city on August 4, 2020. 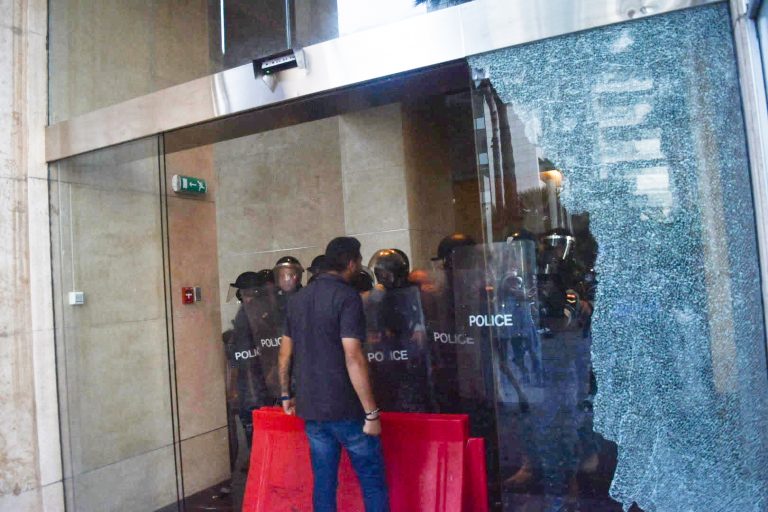 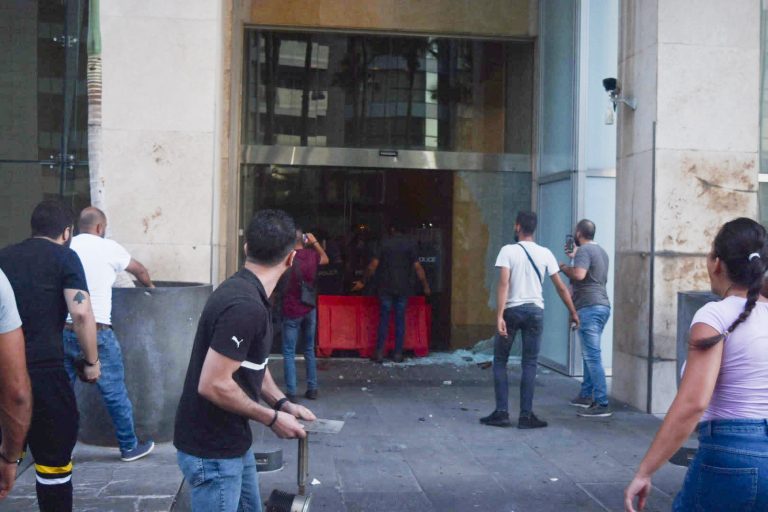 Carmen Khoury, a member of a unified front of 25 opposition groups, delivered the coalition’s demands for leaders to step down.

“We ask Mikati to resign. We don’t want him. He’s also corrupt. He’s part of the whole corrupt [government]. We ask him to leave. We also ask the president of this republic to resign. … We also ask the Parliament to govern the independent judiciary system and to also take off the immunity on all those who are involved with the August 4 crime. And we ask the Lebanese people to come join us and sit in the streets for an open sit-in until these demands are met.”

Hyperinflation in Lebanon has forced much of the population into poverty and made basic necessities like groceries almost unaffordable.

A medical shortage has also made many medications impossible to find or highly expensive. As a result, people have resorted to begging for medication in the streets or asking social media pages with large follower bases to broadcast their request. 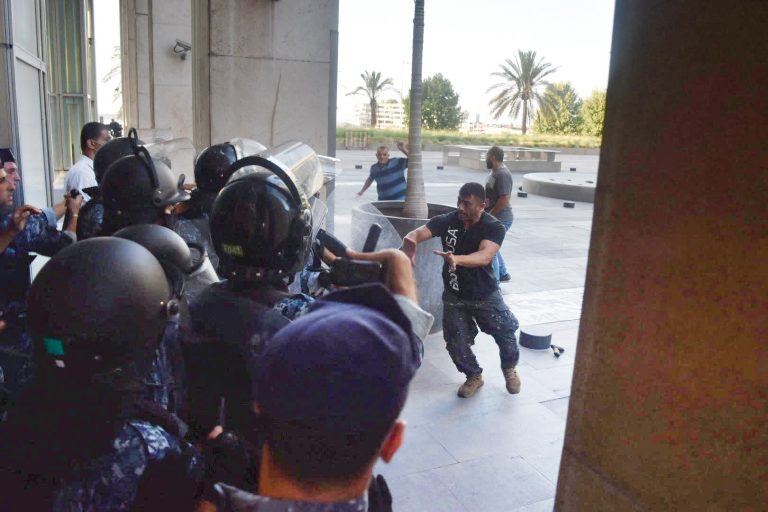 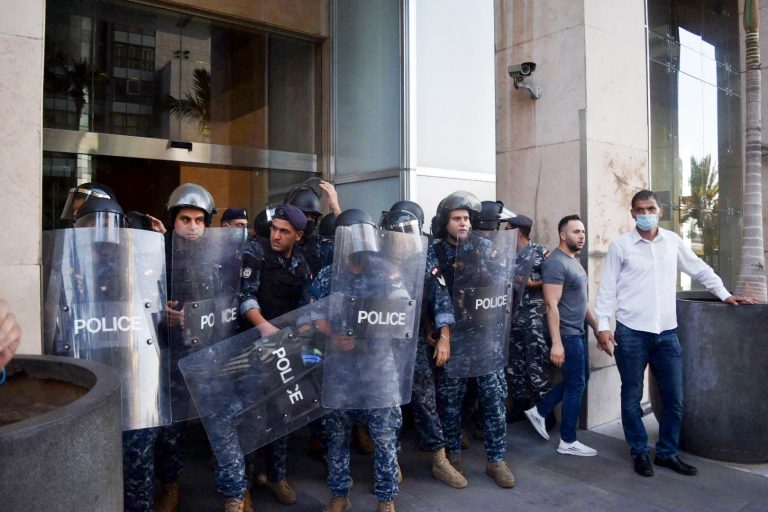 The economic and medical crises have forced many to rely on money sent from abroad and on family and friends to bring medicine when visiting.

As protests unfolded Sunday, demonstrators criticized the police and military for defending government officials and called on them to defect.

“The way they attack people like animals, this is totally unacceptable,” said Claude, a software designer who declined to provide his last name.

The fuel shortage caused by subsidy cuts last week caused many people to lose what little power they had left. Frustrated drivers have left their cars lined up at gas stations as they wait for gas to be sold again. In one stark example of how scarce fuel has become, a prominent hospital at the American University of Beirut sent out an email Saturday warning that 55 patients “would die immediately” if it did not receive fuel within 48 hours. 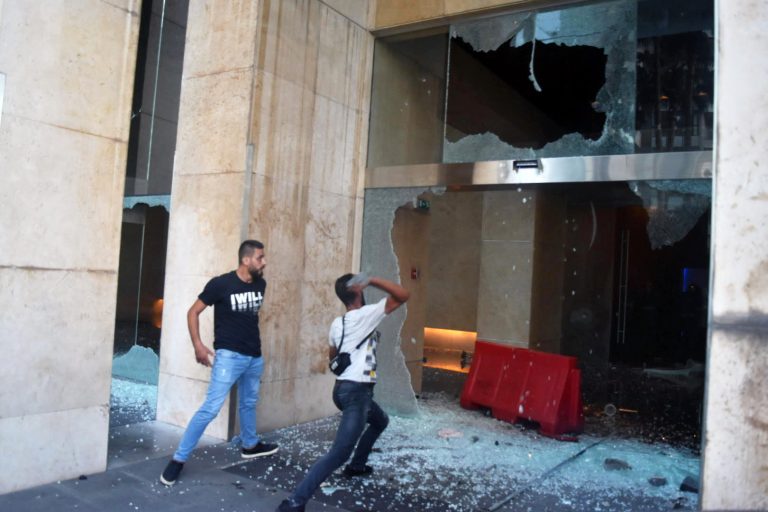 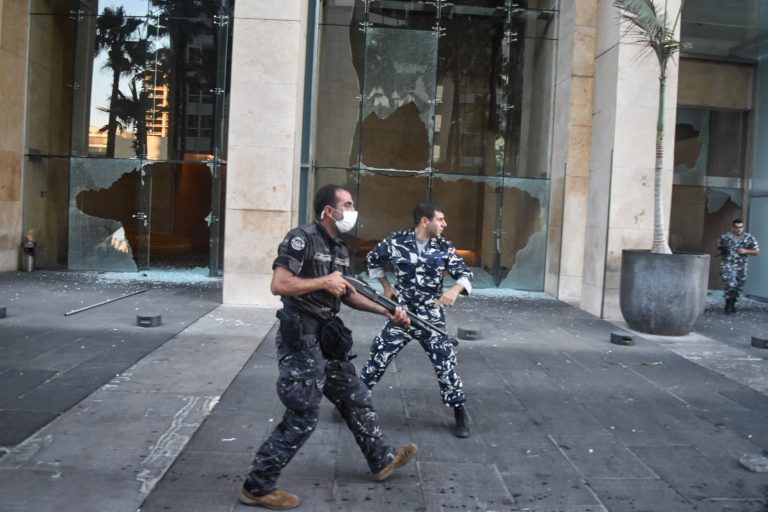 “The AUB and AUBMC administration considers the Lebanese Government and officials in the Lebanese state fully responsible for this crisis and unfolding humanitarian catastrophe, and for any incident of harm or death resulting from the inability to offer medical care at AUBMC as well as other hospitals and medical services providers in Lebanon who are facing the same reality,” the email read, referring to the American University of Beirut and its medical center.

The announcement sparked anger online and contributed to the grievances expressed Sunday.

“Can you imagine the American University Medical Center is shutting down because they have no fuel,” said Haytham El Zein, a sales agent. “Is this acceptable? This is not acceptable at all.”

On Sunday, the university announced that it had managed to secure a week’s supply of fuel from “fuel suppliers, companies and citizens.” 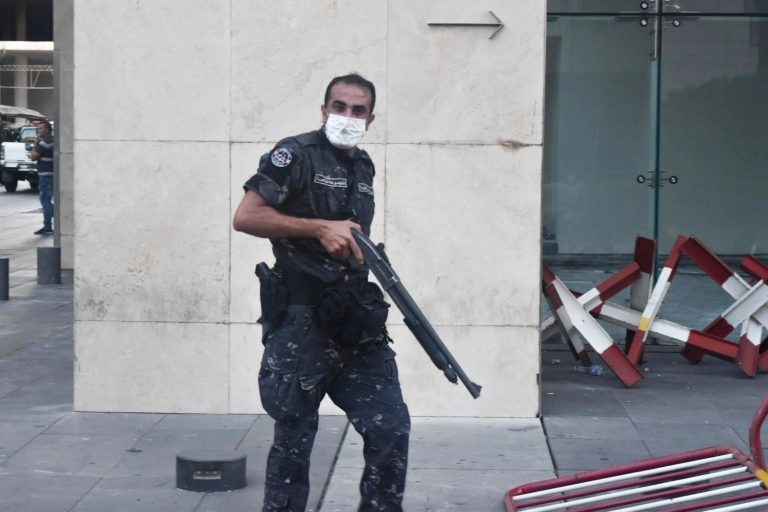 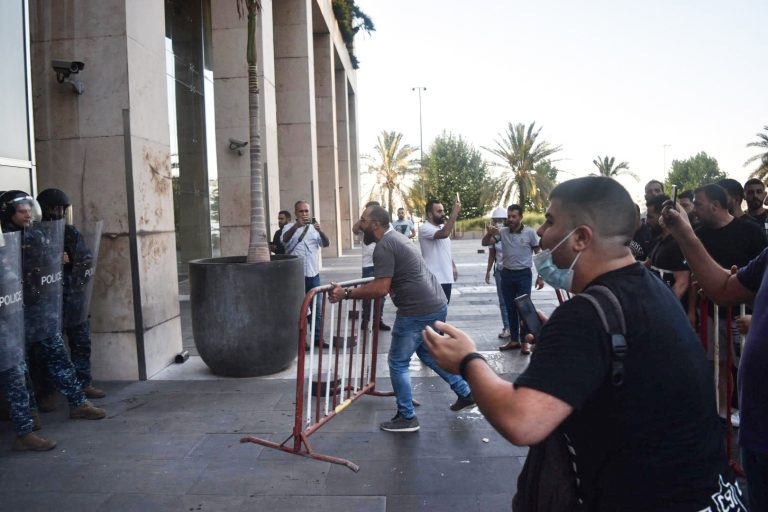 Amid government failures to provide services, civil society and private businesses have stepped in.

With people unable to charge cellphones and other electronics or access the internet due to the latest round of power shortages, private businesses in Lebanon began allowing people to use their space to charge phones and utilize Wi-Fi without having to place orders.

“It is only the people who are helping the people because the government isn’t doing anything,” said Lina Boubess, an activist. “They only robbed us and took all of our money.”

Back in October 2019, as an economic crisis led to a rush on banks in the wake of brief closures, banks severely limited how much money people could withdraw at a time. As the local currency continued to lose its value, people saw their savings disappear. Once pegged to the dollar at 1,500, the Lebanese lira on Sunday was roughly at 19,000. 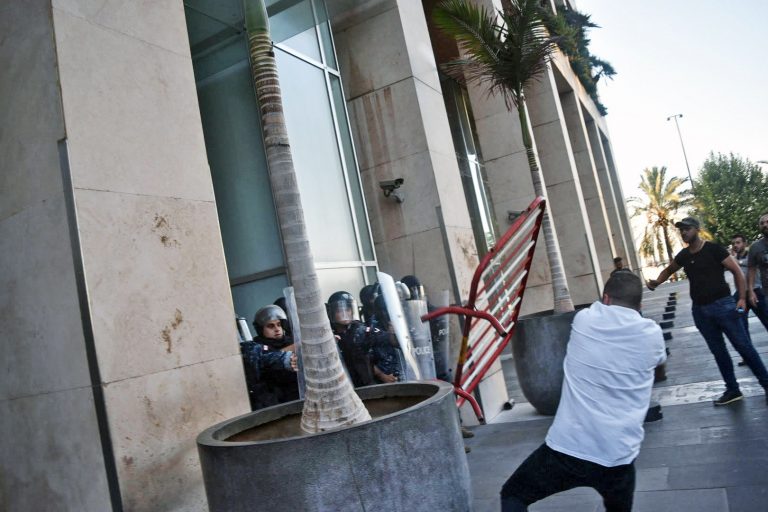 A protester throws a barrier during attempts to storm the residency of the prime minister. Photo credit: Hunter Williamson / WhoWhatWhy 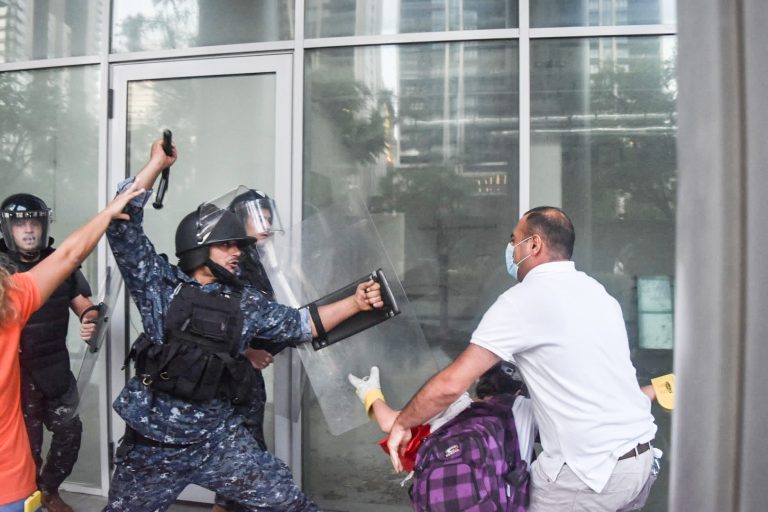 Police strike protesters as they push them from the residence of the prime minister-designate. Photo credit: Hunter Williamson / WhoWhatWhy

.As protesters rallied outside a police station Sunday night to demand the release of detained demonstrators, an accountant named Ali Shamas voiced the anti-establishment anger of many of his compatriots. He called for other countries to stop providing financial aid to the current Lebanese government. “This government can’t get money from other countries because they will steal it,” the accountant said. “We need help from the United Nations.”

Sunday’s events were the latest outburst from Lebanese who have grown sick of their government, which they accuse of being responsible for the dire political and economic crises plaguing Lebanon. Calls for the deaths of politicians have increasingly grown in the past months as the government repeatedly fails to enact reforms to unlock desperately needed aid and mount a real investigation into last year’s devastating port explosion.

Many protesters now feel that a new strategy is needed to force political reform. “We have to do something,” said Khoury. “We cannot stay silent anymore. We tried the peaceful ways and nothing happened.” 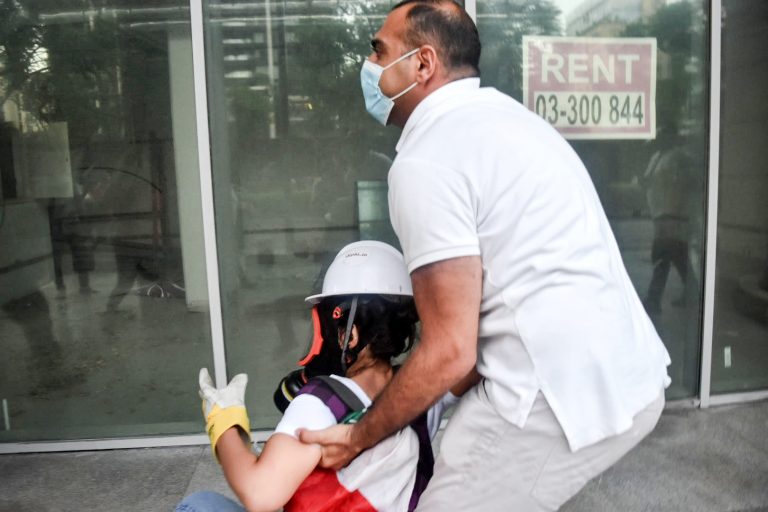 A man drags a woman away from police as they clash with protesters. Photo credit: Hunter Williamson / WhoWhatWhy 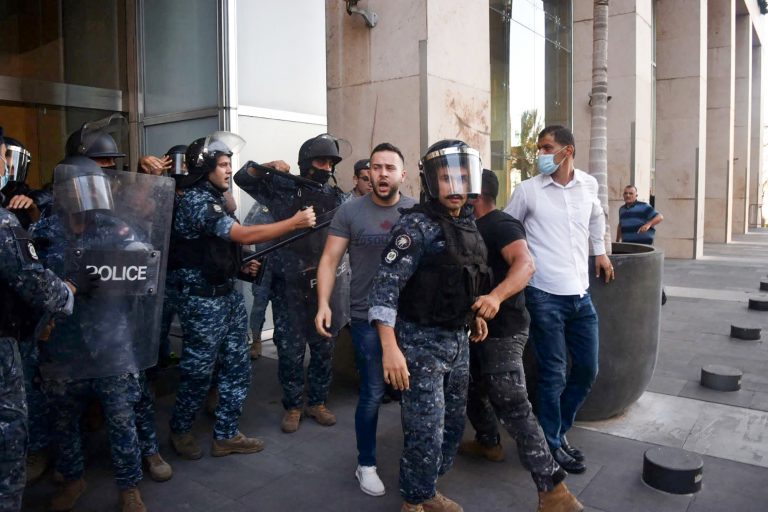 Another protester, Rami Saba, defended actions like the raid on Merhebi’s residence as justified by the current situation.

“When you go to his place and fuck his place he will feel insecure,” Saba said. “This is what they need to feel. When the politicians feel insecure something will change.” 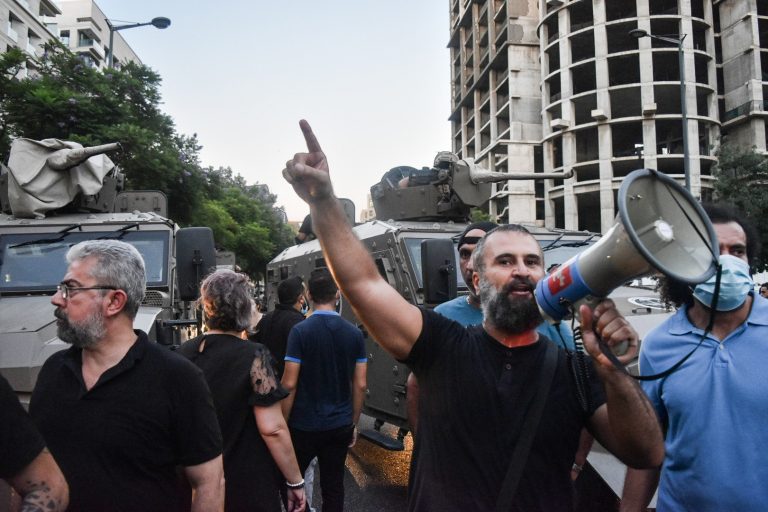 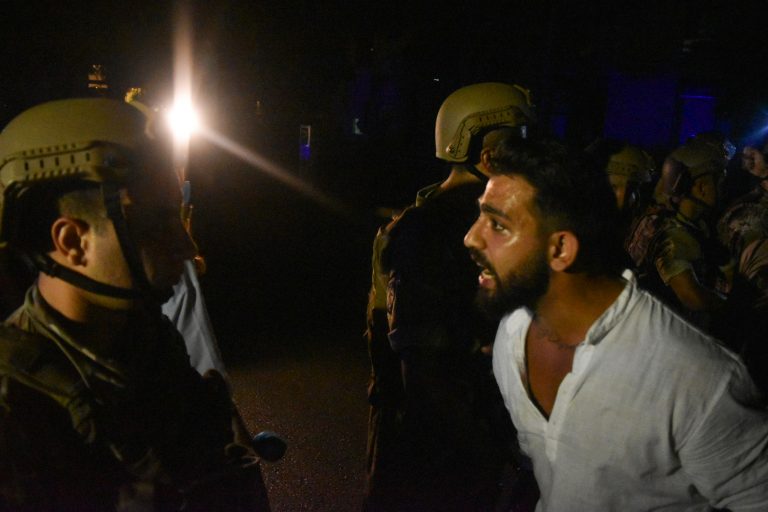 As night falls and protests disintegrate, a man yells at military troops near the residence of the prime minister-designate in downtown Beirut, Lebanon, August 15, 2021. Photo credit: Hunter Williamson / WhoWhatWhy