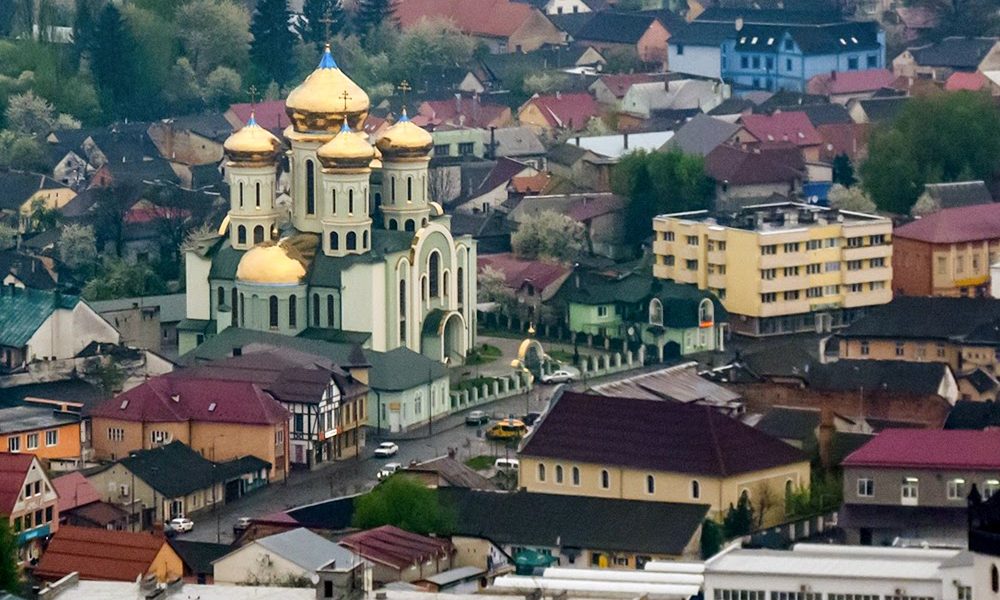 Say “Ukraine,” and for many outside observers, the adjective “war-torn” often springs to mind. Yet its Transcarpathia region seems a world apart.

Despite its seemingly idyllic setting, Transcarpathia could once again become the subject of an international tug-of-war, with potentially destabilizing consequences for an already troubled neighborhood. On the one hand, Russia. On the other, Hungary.

Soviet dictator Joseph Stalin annexed Transcarpathia after World War II. Its bucolic landscape is a far cry from the two parts of Ukraine forcibly annexed by Russia in 2014: in the south, Crimea with its shabby Communist-era seaside resorts, and in the east, rust-belt Donbass with coal mines and heaps of pit tailings pockmarking the sun-parched steppe. The Donbass region, dominated by Russian speakers, continues to be the epicenter of a shadowy, low-level armed conflict between Russian-backed separatist forces and Ukraine’s government. Since 2014, the dispute has killed more than 10,300 civilians.

Before World War II, many of Ukraine’s western regions used to lie within the fluctuating borders of states as diverse as the Austro-Hungarian Empire, Poland and Romania. In Transcarpathia, residents speak Ukrainian and half a dozen other languages, including Hungarian, Romanian, and Rusyn, a Slavic tongue. Despite the superficial appearance of a harmonious melting pot, a different kind of separatism is brewing — with potentially alarming big-power consequences.

On July 13, the SBU, Ukraine’s main intelligence agency, detained a group of “separatists” collecting signatures to protest the results of a century-old, post-World War I treaty that split Transcarpathia from Hungary.

“SBU’s operatives confirmed the fact of recruitment and involvement of Ukrainian nationals in a strategy developed to contest the results of the Trianon peace treaty,” the SBU said, referencing a 1920 accord that made Transcarpathia part of Czechoslovakia for a quarter century before Stalin’s takeover, without providing any further details. The increasingly authoritarian Viktor Orban nostalgically reminisces about a “Greater Hungary” that was three times larger than it is now.

The incident will surely be discussed at the upcoming first meeting between Ukrainian President Volodymir Zelensky and Hungarian Prime Minister Viktor Orban, a far-right autocrat, Eurosceptic and Kremlin ally. Neither Ukraine nor Hungary has confirmed the timing of such a summit.

The increasingly authoritarian Orban nostalgically reminisces about a “Greater Hungary” that was three times larger than it is now, and his government has handed out more than 1 million passports to ethnic Hungarians in neighboring nations. For decades, Hungary has sought more linguistic and political autonomy for Ukraine’s 150,000 Hungarian speakers.

Related: Will Nationalism and Fascism Rise Along With Sea Levels?

Those ethnic Hungarians form one-eighth of Transcarpathia’s population, and are concentrated in districts bordering Hungary. Many accepted Hungary’s offer of passports despite Ukraine’s ban on dual citizenship.

Ukraine residents outside the region tend to view Transcarpathia as a stagnant backwater without a functioning airport. For local Hungarians, however, it is a springboard to lives and careers in Hungary and the European Union.

“In Ukraine, we’re [seen as] provincials with bad Ukrainian, but in Hungary, I can apply to any university and get any job depending on my qualification,” Ishtvan, a 21-year-old ethnic Hungarian told WhoWhatWhy. (He asked to have his last name withheld to avoid any difficulty with authorities.)

Ishtvan lives in Berehove, a postcard-perfect town where ethnic Hungarians account for three-fourths of the population. Street signs are bilingual, and monuments to Hungarian national heroes dot cobblestone squares. Government officials in Kyiv, Ukraine’s capital, have long viewed Transcarpathian elites as unruly. “From the first day of Ukraine’s independence, there were three regions that were given away to local elites in exchange for loyalty to the central government — Crimea, Transcarpathia and Donbass,” George Tuka, deputy minister of Temporarily Occupied Territories, told Obozrevatel magazine in 2018.

But observers blame post-Soviet Ukraine’s original sin — a nationalist push to establish a “strong-state” identity that alienates minorities in the nation made of fragments of fallen European empires and Ottoman Turkey.

“The concept of multiculturalism that is more appropriate for patchwork, sewn-together, post-imperial entities [such as Ukraine] is replaced with a straightforward mono-ethnic” ideology, Kyiv-based analyst Aleksey Kushch told WhoWhatWhy.

Unsurprisingly, minorities objected to former President Petro Poroshenko’s policies making Ukrainian the preferred language of instruction and communication. His successor, Volodymyr Zelensky, pledged to reverse them — but has so far failed to do so. Because of these laws, Orban has blocked Ukraine’s cooperation with NATO, but claims he has no territorial ambitions in Transcarpathia. However, the ultranationalist Jobbik party, Hungary’s second-largest, has called for Transcarpathia’s annexation.

But Ukrainian officials doubt that Orban will ever back an armed separatist uprising in Transcarpathia. “He is not going to rock the boat the way [Russian President Vladimir] Putin did,” a Ukrainian diplomat told WhoWhatWhy on condition of anonymity. “It’s a creeping expansion, he needs leverage in Ukraine.”

Another Transcarpathian minority doesn’t consider itself one — and wants Kyiv to recognize its very existence. Hundreds of thousands of Rusyn (also known as Ruthenian) speakers relish their ties to Kyivan Rus — a medieval political federation located in modern-day Belarus, Ukraine, and part of Russia.

But Kyiv either considers them a Ukrainian “subgroup” — or reluctantly puts their number at a modest 10,000.

“The real number of Rusyns in Ukraine is not reflected in government data, because it hasn’t even been an option on the [2001] census,” Maria Silvestri, president of the John and Helen Timo Foundation that promotes Rusyn culture, told WhoWhatWhy.

Her group is based in Pittsburgh, the birthplace of the world’s best-known Rusyn: Andy Warhol, considered the father of pop art, whose parents emigrated from what is now Slovakia. Rusyns are recognized as a minority in Slovakia, Serbia, and the Czech Republic.

The United Nations and EU have unsuccessfully urged Kyiv to address the grievances of Transcarpathian Rusyns, and observers warn that Ukraine’s reluctance to do so imperils its push to eventually become an EU member.

“Ukraine can’t join the EU or even be in closer association with it, without better treatment of all of its minorities, including Rusyns,” Silvestri said.

The Kremlin, predictably, wants to channel this indignation. Pro-Russian activist Petro Getsko urged Putin in 2014 to “help restore Rusyn statehood.” The former paratrooper was elected “prime minister” of a Rusyn territory whose “autonomy” was proclaimed in 2008 by a handful of community leaders and intellectuals.

Getsko fled to Moscow, where he told this reporter weeks after Crimea’s 2014 annexation that “a mere thousand men will be enough to cut off” Transcarpathia from Ukraine. In 2019, a Ukrainian court sentenced him to 12 years in jail in absentia on treason and separatism charges.

But the majority of Rusyns don’t support the idea of an armed rebellion, community leaders insist.

As activist Tatyana Pop told Ekho Kyiva radio last September: “We live in Ukraine, love and respect it, and simply want it to be mutual.”