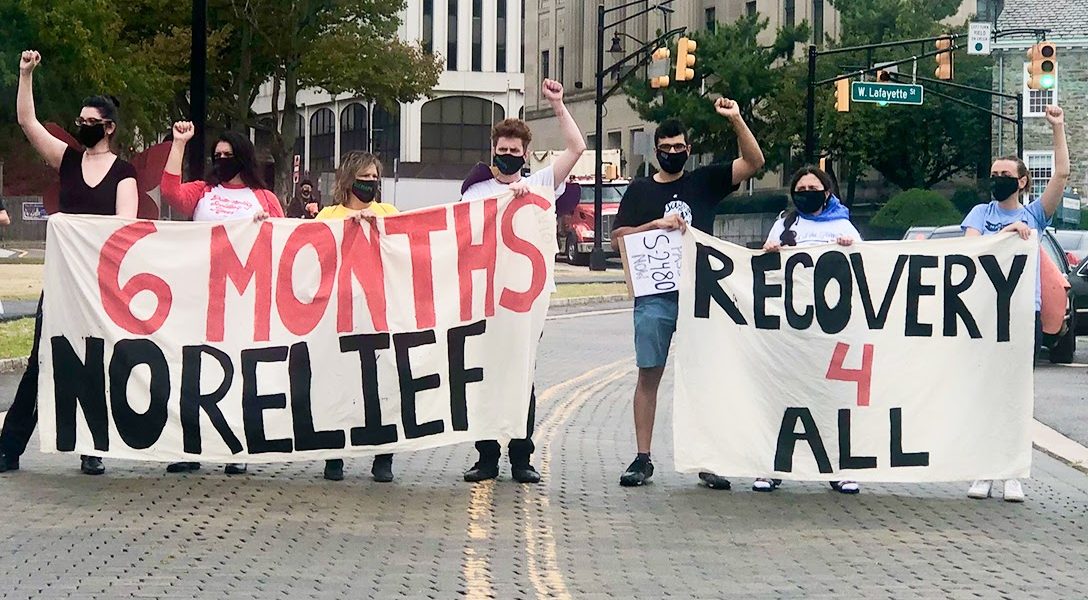 The Betrayal Behind NJ’s New 2021 Budget

Undocumented immigrant workers — who are overrepresented in essential jobs like farm work and food production, and who contribute $600 million annually to New Jersey state taxes — were left high and dry by the new state budget. Many in dire need of financial relief felt it was more than just a disappointment — it was downright betrayal.

Even as Democratic Gov. Phil Murphy signed into law a budget aimed at helping New Jersey residents weather the impact of the pandemic and build their “post-COVID future,” angry immigrant workers and their advocates protested outside the Trenton War Memorial where the signing took place behind closed doors — a scene that was pointedly symbolic of the reality on the ground.

“We have been let down and we were expressing our outrage,” said Patricia Campos-Medina, a labor expert and grassroots organizer who spoke at the protest on September 29. According to Sara Cullinane, executive director of Make the Road New Jersey, one of the advocacy groups negotiating with state lawmakers to vote on a bill that provides financial relief to undocumented workers and their families, the legislation has bipartisan support, as well as from all parts of the state. “Our communities are now seven months without aid. There is no reason for delay,” she said.

Campos-Medina and Cullinane are part of a coalition of immigrants’ and workers’ rights organizations — including New Jersey Alliance for Immigrant Justice and Latino Action Network — that has been in talks with the state government since the pandemic hit in March. In addition to a $1,000 payment to taxpayers who file using an ITIN, (a number assigned to noncitizens who are not eligible for social security numbers) advocates are asking for a weekly payment of $600 in unemployment insurance to immigrant workers who are unemployed.

Sources close to the negotiations revealed that initial efforts to secure funding through an executive order issued by Murphy had stalled. Funds released through executive orders do not have to be approved by the Legislature.

“It seems to us, as advocates, that the governor’s office is unfortunately backing away from allocating funds for COVID relief to undocumented taxpayers and are looking to advocates to pressure legislators into taking action,” said Campos-Medina. Early in the negotiations, advocates hoped to find private donors to supplement funds issued by an executive order. This idea, inspired by New York City billionaire George Soros’ partnership with Mayor Bill de Blasio, which provided $20 million in relief to the city’s undocumented population, did not pan out. Similar programs providing taxpayer-assisted funding to immigrants regardless of documentation were created in April in Minneapolis, and in California.The governor’s office refused to comment on the question of how advocates should proceed, now that their demands did not make it into the budget.

Undocumented taxpayers will receive tax rebates funded by the reinstated “millionaire’s tax,” fulfilling Murphy’s attempts to raise taxes on New Jersey’s wealthiest residents at a time when the coronavirus crisis has exacerbated economic inequities, but advocates were dismayed that these undocumented taxpayers were left out of all COVID-related state relief. Effective October 1, the state tax on incomes over $1 million rose by nearly 2 percentage points, giving New Jersey one of the country’s highest tax rates on wealthy people. New Jersey ranks fourth highest in terms of the country’s undocumented workforce. Efforts to secure financial relief for them ramped up in the aftermath of the federally-funded CARES Act, which also excluded undocumented taxpayers.

Advocates were encouraged when state Sen. Teresa Ruiz (D), a sponsor of the bill that would potentially fund COVID-relief for undocumented workers, brought Senate President Steve Sweeney’s (D) policy team on board to help draft it, but the Senate Majority Office did not respond to an email asking for his position on where the proceedings stand now. Sweeney is a fiscally conservative Democrat whose support was critical to Murphy’s success in passing the budget with the “millionaire’s tax,” after two years of rejecting the governor’s attempts to do so. Meanwhile, voters support providing financial relief to tax-paying immigrants; a poll released by Change Research in September shows that 63 percent of New Jersey voters are in favor of such a move.

“We are grateful for the millionaire’s tax because it is going to increase the pool of resources available to increase funding other initiatives,” said Campos-Medina, “but we need Gov. Murphy to show his commitment to undocumented and immigrant workers in New Jersey.”

In a press release on September 29, Make the Road New Jersey announced that protesters were risking arrest by blocking traffic outside the War Memorial. In the end though, the protest was peaceful. Police diverted traffic away from the building and resisted interfering with the gathering and its speakers, despite their attempts to draw attention to their cause.