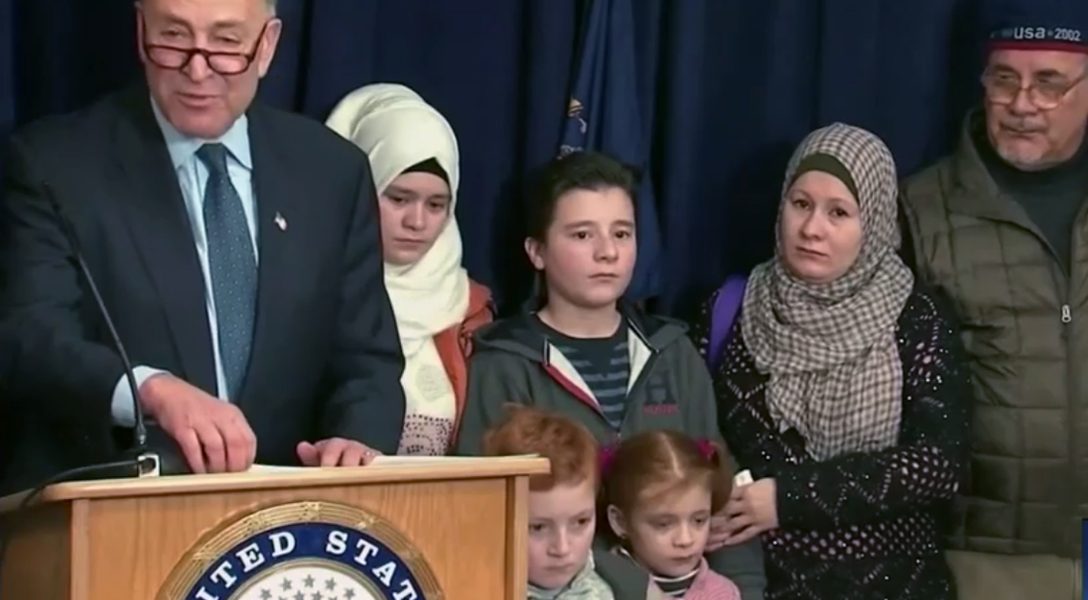 Muslim Response to Antisemitism Much Stronger Than Trump’s

On February 28, at his joint address to Congress, President Donald Trump announced the creation of a new office as part of the Department of Homeland Security. He named it Victims of Immigrant Crime Engagement, or VOICE.

“We are providing a voice to those who have been ignored by our media, and silenced by special interests,” he said. And he wants the office to issue quarterly reports on “the effects of the victimization by criminal aliens present in the United States.”

Creating Homeland Security offices for specific victims is a great idea. How about such an office for native Americans? They still suffer effects of immigrant victimization, even if the immigrants in question  — Colonial era white Europeans — aren’t exactly the ones Trump had in mind.

And how about an office for immigrant victims of white supremacist, Christian extremist Americans?  Victims who are either immigrants, or foreign-looking, dark-skinned people, or Jews — or Muslims.

The percentage of hate crimes against US Muslims is way up. They may be the most hated people in America because, understandably, so much publicity is given to the acts of extremist Muslims, even though they are a tiny minority of the 1.6 billion in the world, as of 2010.

But what about the majority — the moderates? We think you should know about a few of their acts too:

For instance, when a monsoon blew away a church in Pakistan, Muslim villagers, no matter how poor, donated money to build a new one. When white extremists burned African-American churches, Muslims helped raise money to rebuild them. When Islamic extremists killed 14 people in San Bernardino, California, Muslims raised $170,000 for the victims’ families. In London, Muslims donated 10 tons of food for the homeless, and 90% of the recipients were non-Muslim.

But what may surprise you the most is the Islamic response to anti-semitism in America. A few examples:

Sometime during the weekend before Monday, February 20, in a Jewish cemetery just outside of St. Louis, Missouri, 180 gravestones were vandalized. Within 24 hours of this desecration, Islamic activists went to work raising money online to repair the damage. Soon they raised a great deal of money. About two-thirds came from Muslims, and the remainder came from Jews.

As of February 26, they had raised about $130,000 — far more than needed to repair the damage, and far more than expected. One of the activists involved, Tarek El-Messidi, said they vowed to use the remaining money strictly when needed — to counter anti-Semitism.

Just one weekend after the St. Louis incident, gravestones in a Jewish cemetery in Philadelphia were vandalized. (The police said about 100 gravestones were damaged, but El-Messidi said “several hundred” were affected.) And, again, El-Messidi’s group came to the rescue, paying for damage, and, working alongside Jews, Christians, and others, restoring what they could with their bare hands.

And Muslim veterans have offered to guard Jewish religious sites across America.

We find it very interesting that it was Muslims — not Trump — who rose to the occasion, and without prodding.

It is also very interesting that so many Jews are opposed to Trump’s temporary banning of immigrants from seven Islamic countries. Senator Chuck Schumer (D-NY), a Jew, was especially eloquent and emotional on the subject. At a rally in Lower Manhattan, he stood with a family of Muslim immigrants, trying to keep his voice from breaking and the tears from flowing, as he expressed outrage at Donald Trump’s order:

“… this executive order was mean-spirited and un-American. It was implemented in a way that created chaos and confusion across the country, and it will only serve to embolden and inspire those around the globe who will do us harm.”

But this isn’t about Jews and Muslims. It’s about humanity — as well as survival.

We thought this might be a good time to re-run an article we posted last year about Muslims and Jews — supposedly mortal enemies — and Christians and Muslims, protecting each other in hotspots around the world. It was a feel-good story, and one we could use right now. Graffiti by “Combo,” a Paris “street artist” who, after a bad beating by unidentified teenagers, was ordered to remove his picture and shave his beard. He did neither.
Photo credit: elPadawan / Flickr – CC BY-SA 2.0