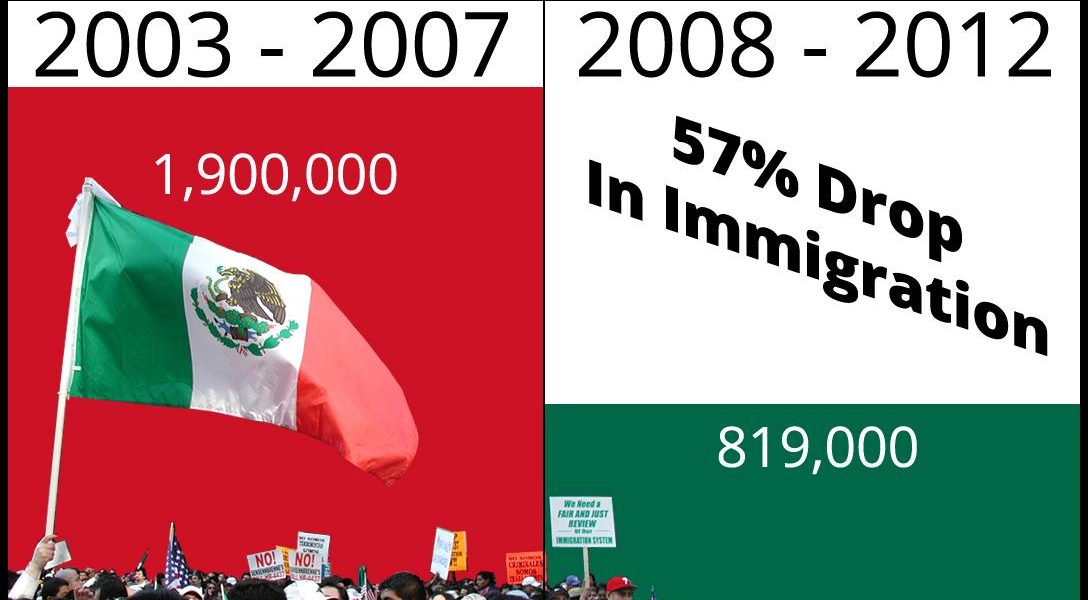 A new study shows that Donald Trump’s shrillest talking point—a key source of anger and a political motivator of many Americans–is flat out wrong.

That brown horde of unsavory characters pouring across the border to steal jobs from native-born Americans?   An exaggeration so egregious it might more accurately be called a lie.

The study, by demographers from two universities and first reported by Reuters, has gotten little attention. Yet the findings are astonishing and important: immigration from Mexico is way down.

There has been a whopping 57 percent decline in the number of Mexicans crossing the border.

The research, which combines all immigration–legal and illegal—compared a four-year period ending in 2007 to one ending in 2012…and found a whopping 57 percent decline in the number of Mexicans crossing the border.

In fact, immigration peaked way back in 2003.

Mexicans are staying away for a variety of reasons. Jobs in the construction industry dried up with the US recession. The Mexican economy is improving. And Mexicans are having much smaller families than they did in the past, which is causing financial pressures to decline further. It all demonstrates the apparent benefits of remaining at home.

Mexican immigrants today often look nothing like the bedraggled and desperate that Trump says undermine the American way of life. According to the report’s lead author, Rogelio Saenz, dean of the College of Public Policy at the University of Texas at San Antonio, they tend to have more in net assets and in many cases they have arrived via special visa programs that require they make job-creating investments. In other words, more like prospective buyers of Trump condos than like the laborers who construct them.

What is most astonishing is that a game-changing development like this report can be blithely ignored by the American media horde and fulminating rating-chasing talking heads covering the campaign war of rhetoric.

The reason? The Donald is just the gift that keeps on giving–and maybe nobody wants to turn off that particular spigot of controversy too soon. The supreme irony is that Trump himself never intended to make a big deal out of the issue until a media outlet spotted the potential, and then Trump decided to ride it for all it was worth.

It’s worth plenty–a lot more, apparently, than the truth is worth.