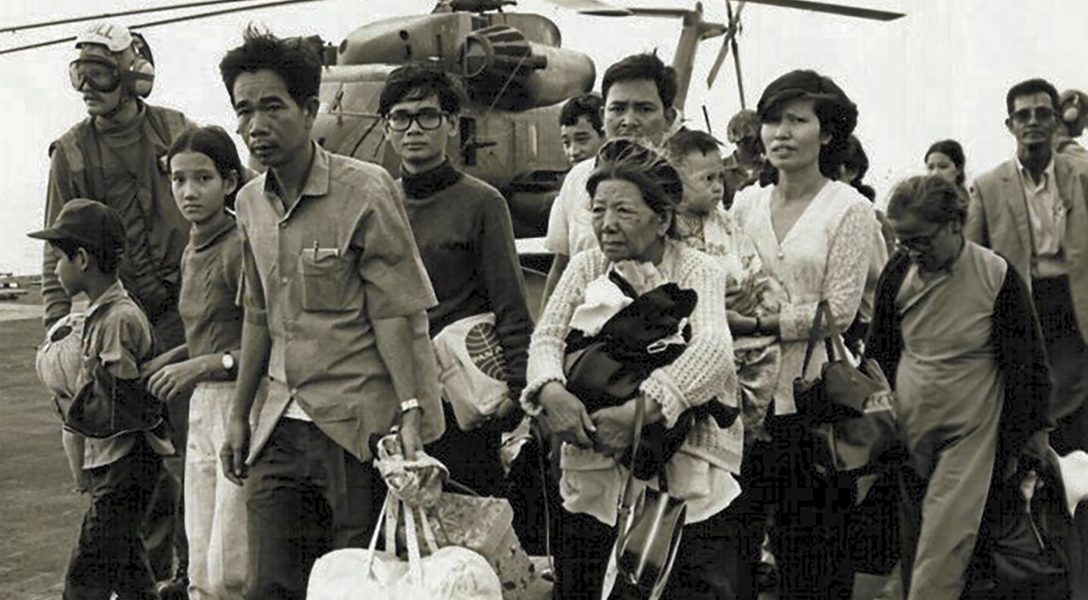 Hostility to the proposed refugee resettlement program was high. A poll showed that 62 percent of respondents agreed with the statement: “The [refugees] will take jobs away from Americans at a time when unemployment is up, and this is wrong.”  The public also worried that hostile foreign governments would infiltrate the refugees program with anti-American terrorists.

California Democratic Gov. Jerry Brown opposed the resettlement of refugees in his state, arguing, “There is something a little strange about saying, ‘Let’s bring in 500,000 more people’ when we can’t take care of the 1 million [Californians] out of work.”

Joe Biden also expressed skepticism about admitting refugees into the US.

Sound familiar? Those sentiments were expressed more than 40 years ago. And the refugees in question were not Syrian but Vietnamese.

As for refugees being a burden on US taxpayers, a 2017 study from the National Bureau of Economic Research found that refugees contribute more in taxes than they receive in benefits.

Often overlooked by all the media coverage of the Syrian refugee resettlement controversy is the impact the earlier Vietnamese resettlement program had on both public opinion and public policy.

The US public has seldom welcomed refugees. In 1956, a Gallup poll asked Americans whether they would be in favor of a plan to allow 65,000 Hungarian refugees into the country in the wake of the Russian invasion of Hungary: 55% disapproved while only 33% approved. In a 1980 survey, more than seven out of ten Americans opposed the admission of more Cuban refugees into the country.

When the first Vietnamese started arriving in the US in the mid-1970s, they encountered even greater hostility than Syrian refugees face today. Yet, with 20/20 hindsight, the Vietnamese resettlement program is now widely seen as a model initiative.

Linda Vo, director of the Vietnamese-American Oral History Project at the University of California at Irvine, noted the irony: “The refugees we did not want, the Southeast Asian refugees, are now being used as an example of why we should accept more refugees.”

Until the flood of refugees that followed the fall of Saigon to the Communists in 1975, refugee resettlement on American soil was a more-or-less ad hoc operation. But with the arrival of large numbers of Vietnamese who had worked closely with the US military and whose lives were suddenly in danger in their native land —  it became clear that a more formal, structured process was needed.

Setting in motion such a process was a key purpose of the 1980 Refugee Act. Quyen Dinh, executive director of the Southeast Asia Resource Action Center, points to the creation of the Office of Refugee Resettlement (ORR) as a landmark.

The fear that North Vietnam would infiltrate the refugee program was as widespread in the 1970s as today’s fear that terrorists will use the Syrian refugee program to slip into the United States. But the success of the vetting process put in place for Vietnamese applying for refugee status suggests that such fears are misplaced.

“When my parents arrived as refugees from Vietnam,” Dinh said, “it was because of the [Refugee] Act that they were able to access housing. And had it not been for this legislation, our lives in America would not have been possible … This has been a program that has benefitted refugees worldwide — from Burma to Bhutan to Syria, Iraq, Iran, and other countries.”

The ORR was not only responsible for integrating refugees into the mainstream of US society; it also fostered the development of mutual-assistance organizations in many Southeast Asian communities. These largely volunteer-based groups provided crucial assistance to the newly arrived Vietnamese refugees.

While all three Vietnamese-American leaders interviewed for this article affirmed the overall success of resettlement, all agreed that real problems remained. Dinh cited the 30 percent poverty rate in today’s Vietnamese-American community, 10 points higher than native-born Americans, as proof of the need for more social and economic support programs, such as increased funding for education for newly arrived immigrants.

Government aid is not the only option. Duc Nguyen, an award-winning documentary producer, cited a novel program that forged links between Vietnamese grassroots groups and the Canadian government. The government agreed to admit 2,000 Vietnamese who had found temporary refuge in the Philippines if the Canadian grassroot groups pledged to be responsible for the refugees’ living expenses, and to find them jobs and housing. The Vietnamese in Canada also paid for the refugees’ air fare, health check-ups and other expenses.

Seven years after the refugees were resettled, the program is an acknowledged success, Nguyen told WhoWhatWhy. They were able to find jobs and did not have to depend on public assistance. The Canadian government was so impressed, he said, that it was willing to admit 100 Vietnamese living in Thailand on the same basis.

“I think that type of resettlement program should be applied everywhere,” he added.

Deja vu All Over Again

The successful integration of Vietnamese refugees into American communities may have changed long-held attitudes toward refugees in general — particularly the fear that refugees would wind up on the dole, burdening already hard-pressed American taxpayers.

“The area I live in is called Little Saigon,” Nguyen said. “It used to be a dilapidated city … And when the Vietnamese community moves in, it becomes one of the most bustling, attracting tourism, a lot of business. It’s growing and it’s the contribution the Vietnamese refugees brought to this country that revitalized the area.” Nguyen’s personal experience appears to be backed up by demographic data. A 2014 Migration Policy Institute survey of Vietnamese immigrants found that they were doing better economically than both foreign- and native-born populations. In 2014, median household income among Vietnamese immigrants was $59,933 — compared to $49,487 for all immigrant households and $54,565 for US-born households. (The Institute cautions that this statistic may be skewed by the larger average size of Vietnamese households.)

As for the idea of refugees being a burden on US taxpayers, a 2017 study from the National Bureau of Economic Research found that refugees contribute more in taxes than they receive in benefits. This study looked at all refugees who entered the country as adults, concluding they will have paid an average of $21,000 more in taxes than they received in benefits over their first 20 years in the United States. The amount each pays in taxes — $129,000 — greatly exceeds the $107,000 the government pays in relocation costs.

The fear that North Vietnamese Communist agitators would infiltrate the refugee program was as widespread in the 1970s as today’s fear that terrorists will use the Syrian refugee program to slip into the United States. But the success of the vetting process put in place for Vietnamese applying for refugee status suggests that such fears are misplaced.

“Our vetting system, believe it or not, is one of the strictest vetting systems there is. There are people who stay in refugee camps for years,” Nguyen said. “I just did a story on these Vietnamese refugees who had been in Thailand for 25 years before they got resettled to Canada. So, would a terrorist wait 25 years for the opportunity? I don’t think so.”

Indeed, there has not been one documented case of the North Vietnamese successfully infiltrating the Vietnamese refugee resettlement program with anti-American agents. That fact has been used as an argument in favor of accepting more Syrian refugees.

Another fear commonly expressed in the media and on the web is that foreigners, especially Muslim refugees from Muslim-majority countries, would not be able to assimilate into American culture, with its Western, “Judeo-Christian” values. That same fear was expressed in the 1970s about the Buddhist Vietnamese refugees emigrating to the US.

To Linda Vo, the successful assimilation of the Vietnamese refugees shows that this fear too is unfounded: “Vietnamese, whether they are Buddhist or Catholic, are here because they have nowhere else to go. They have resettled here, have created a new life here, given back to the community, are taxpayers, as much as anyone else.”

She sees no reason to think the new waves of immigrants will not achieve the same success: “There are Muslims in this country that contribute economically, politically, socially, culturally, in all kinds of ways … It is inexcusable to say that because they are Muslims [the Syrian refugees] will not assimilate or give back to this country.”

Lessons from the Vietnamese Resettlement Program

* Do Not Disperse the Refugees Among the Population. When the first Vietnamese refugees came in the 1970’s, government policy was to disperse them across the country in an attempt to assimilate them as quickly as possible.

“This was ineffective,” Vo said, “because many of these refugees found themselves very isolated in areas where there were very few, not just Vietnamese, but other Asian Americans. And no job opportunities or educational opportunities.” Only when the refugees started to voluntarily regroup into Asian American communities were they able to benefit from self-help organizations and achieve greater economic success.

* Mental Health Services Are Crucial. “Vietnamese and [other] Southeast Asian refugees… they have experienced a lot of trauma — civil war, being displaced, escaping as refugees,” Vo said. So beside material aid and basic health services, refugees would benefit enormously from targeted mental health services.” That would make an incredible difference in the community,” Vo added. “Oftentimes we overlook that as a factor in helping them resettle.“

* Stop Stereotyping and Demonizing Refugees. Leaders within the Vietnamese-American community decried the anti-refugee rhetoric and stereotyping too often found in political discourse and in the media. “How politicians and policy makers receive and treat these refugees from the top down has an important impact on how the American public will receive and treat them as well,” stated Vo.

* Educate the American Public on How US Foreign Policies Often Created Refugee Displacement. Too often the American public is unaware of how US foreign policies, from the Vietnam War in the 1970s to more recent interventions in the Middle East, have spread violence and instability, forcing many to flee their homelands. (Please see our earlier story on this.)

* Development assistance for regions of origin. CIREFCA, the International Conference on Central American Refugees — which targeted development assistance for both the countries that hosted refugees and the displaced populations — is cited as a model for successful refugee resettlement. For example, Mexico hosted a large number of Guatemalan refugees. With CIREFCA funding, the Mexican authorities set up agricultural projects staffed by the migrants on undeveloped Mexican land, providing them with self-reliance opportunities.

While large segments of the US remain hostile toward accepting refugees, the impact of successful refugee resettlement programs cannot be ignored. The same Governor Brown who in the 1970s came out strongly against the settlement of Vietnamese refugees in his state had, by 2016, changed his tune.

I intend to work closely with the President so that he can both uphold America’s traditional role as a place of asylum, but also ensure that anyone seeking refuge in America is fully vetted in a sophisticated and utterly reliable way.

Another prominent refugee resettlement skeptic went even further. In 2015, Vice President Joe Biden warned that the US promise of opportunity and optimism, including to those seeking refuge, is currently slipping away, with deeply disturbing consequences:

[The US promise of opportunity] always been true in this country. And if we ever lose that, then we will have lost something incredibly special and consequential here in the United States. We’ll have lost the soul of the country, and I would argue we’re in danger of losing it now.

While it may be hard to pinpoint what caused this change in attitude, it’s not hard to believe that the heartening success of the Vietnamese resettlement program played a role.