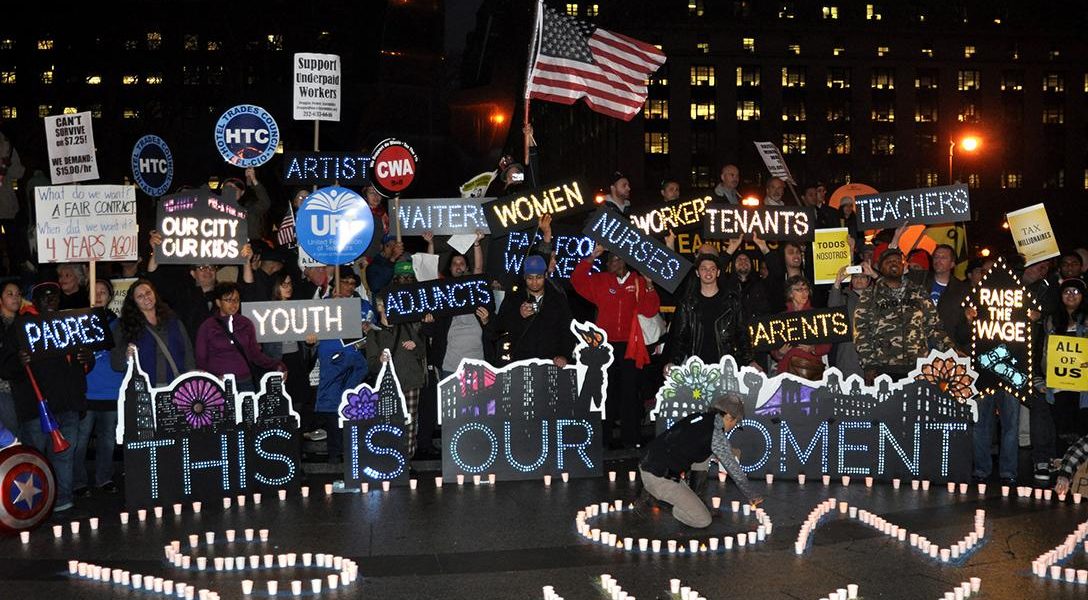 Out of Work? Out of Hope? Read This

This is the second of a two-part series. To see the first part, please go here.

All too often the reporting on our quickly evolving political economy is statistic-driven and devoid of the humanity that should be at the heart of the discussion.

John Fugazzie, 59, from Bergen County, New Jersey, has personally grappled with long-term joblessness. In the process he lost his home and filed for bankruptcy. He says the US labor market has been so radically altered by the Great Recession the nation is still in the throes of a jobs crisis that’s largely ignored.

Back in 2011 Fugazzie started an unemployment self-help group called Neighbors-helping-Neighbors USA (NhN) at his local library. NhN quickly grew into a statewide grassroots effort that has helped 500 people find work. Fugazzie says it is important for the long-term unemployed to not feel isolated, especially when the mass media and many politicians continue to proclaim the country is in recovery.

“You see very qualified people who are out of work. Then you realize there is really something significantly wrong with this economy.”

“When you are in a job search alone you really blame yourself: ‘I am doing something wrong, there is something really drastic going on here that I need to fix,’” Fugazzie told WhoWhatWhy during an interview outside the River Edge public library where he started his group. His local initiative has now been emulated as far away as Madrid, Spain.

“It wasn’t until I really started getting out there that I realized you see in your neighborhood lots of very qualified people who are out of work. Then you realize there is really something significantly wrong with this economy.” Fugazzie says older unemployed workers are particularly hard hit. As far as the widely reported declining unemployment rate, Fugazzie says it is an illusion that masks a labor market that’s become increasingly “Uberized” as businesses move from permanent to contract employment.

“When they report these statistics, nobody is drilling into them,” Fugazzie says. “I have had lots of conversations with young reporters who will say the unemployment rate went from 7% to under 5% and they’ll say that means things are better. Go out and talk to the people that don’t get jobs. Go talk to the people that took a job for 50% of what they made before, and you’ll get a sense of the scale of this.”

The statistics also fail to capture the “huge collateral damage done to the families,” Fugazzie says. “There are things that happen with long-term unemployment that are unrepairable, like relations between spouses and children. The reward for helping people back to work is that you are not just helping that one individual  but an entire family that lives and dies with this.”

Ironically, it was Fugazzie’s volunteer efforts founding NhN that led to him having face-time with Secretary of Labor Tom Perez and a full-time job with New Jersey’s Council of County Colleges, working to address New Jersey’s long-term unemployment challenges. The program was one of just 23 to be recognized around the country with a competitively awarded $10 million-dollar grant.

Fugazzie participated in a focus group Perez convened with long-term unemployed workers. One of the issues that repeatedly came up, Fugazzie says, was the significant tax penalties paid by the long-term unemployed who withdraw  their money from their 401 K plan prior to retirement to make ends meet.

“If you are going to cash in your 401 K for a boat you should pay the tax penalty,”  Fugazzie says. “But if you’re cashing it in to keep your house and feed your family that should be different.” A proposal to end the penalty was incorporated into President Obama’s executive budget.

In January of this year Fugazzie was named executive director of the Hudson County/Jersey City Workforce Development Board. John Fugazzie of Neighbors-helping-Neighbors reads a story from an American calling on Congress for help as the long-term unemployed continue to search for work, July 16, 2014.
Photo credit: Center for Effective Government / Flickr (CC BY-NC 2.0)

Beryl Thurman, 57, lives on Staten Island in a house that was built just before the Civil War. After decades of working for someone else, she decided to step off the employee treadmill and become her own boss. Since 2005 she has been the Executive Director of the North Shore Waterfront Conservancy of Staten Island, a group she founded.

“If I am doing something with my life it has to be something that at least I not only enjoy, but one that actually makes a difference in the lives of people and of a community.”

Thurman, who graduated from college in 1980, has worked as a flight attendant, in freight forwarding, as an art dealer, and as a human resources manager. When she went on strike as a flight attendant against Continental Airlines in the 1980s she and her colleagues were locked out. “We went out but the mechanics and pilots did not follow us,” Thurman recalls.

It was her last position, managing leave and health care benefits for a major New York State non-profit, that prompted her to withdraw from the labor force to try to re-imagine her life.

“The people I had the most contact with were chronically ill. My job was to get them from whatever phase they were at to the next stage of their life,” Thurman recalls, while speaking with WhoWhatWhy. She became close to the ailing employees and their families. “I had one really bad week where I lost three people, one right after the other, one from AIDS and two from cancer.”

“The salary was OK but I realized it wasn’t fulfilling,” Thurman says. “If I am doing something with my life it has to be something that at least I not only enjoy, but that actually makes a difference in the lives of people and of a community.”

“If I can’t get past that glass ceiling because of my age, the color of my skin, or because of my gender, then I need to do something I want to do,” Thurman says.

The decision to seek self-directed work meant she had to dramatically cut back on her cost of living. This allowed her to get the environmental advocacy nonprofit off the ground. Historically, the north shore of Staten Island has had major pollution issues with 21 toxic hot spots including one site that goes back to the Manhattan Project when uranium from the Belgian Congo was stored on the waterfront.

The North Shore Waterfront Conservancy acts as both educator and watchdog over powerful agencies like the Port Authority, and the alphabet soup of city, state and federal environmental regulators responsible for land use policy and environmental clean-ups.

“I believe whenever you come across a place or a situation, you are supposed to make it better than the way you found it, not as is, or worse off,” Thurman says. After working for nine years as a consultant to her non-profit, this was the first year she could draw a salary. And, thanks to the passage of the Affordable Care Act, she finally has health care.

Jessica Abend easily looks ten years younger than her actual age of 40.  A Tulane University graduate with a master’s degree in education from Kean University, Abend’s work history includes internships, paid work and, when all else failed, heroic volunteerism. Since graduating from college she has had to move back in with her parents four times, but now has her own place.

“I was one of those people you heard about that lost unemployment benefits back at the end of 2013,” Abend says. “I missed the extended benefits by about three days.” When she started at Tulane, Abend thought she wanted to be an architect. But she soon found herself inspired by a work-study job in scenic construction at Tulane’s theater department. She got to use power tools and learned how to weld, and earned a BFA in technical theater and stage management.

“Learning how to build and create really hit a spot with me,” Abend told WhoWhatWhy. “I was definitely one of the only women in the scene shop, and there were times that the guys forgot I was there, so I got a little bit of an education about what men are like when women are not around.”

After graduation she did a one-year internship with a theater group that led to paid positions in Miami, New Jersey and off-Broadway in New York City. When the funding for her last position dried up, Abend moved back home for the fourth time. Hoping to find a career with more stability, she went back to school for a graduate degree in education.

After failing to land a permanent position in an urban district where she wanted to teach, Abend was hired by a suburban school district in Monmouth County. There she created an after-school drama program and special tutoring programs. Her volunteering to work after hours with students who needed extra help risked the ire of the local teachers’ union. “I had to do it on the sly,” she says.

The administration showed no gratitude for her initiative. “I was teaching fourth grade and being laid off every spring and then hired back by the beginning of the summer,” Abend says. She was laid off for the last time, one day before getting tenure.

“It was heartbreaking to say the least,” she says.

Abend did not want to back in with her parents. “So I was really scraping bottom and I pared my budget down to essentials.”

Deciding her work-life needed a reset, she embarked on what can only be described as a radical immersion in volunteerism as a way to find her next paying job.

“I joined the Community Soup Kitchen in Morristown in 2013,” Abend says. “But I was also volunteering with Family Promise, an organization that helps people transitioning from homelessness.” At the same time she was working for free with a co-operative garden.

Abend ultimately got a paid staff position with a local Habitat for Humanity chapter, coordinating their volunteers and supporting their fundraising, as well as serving as an executive assistant.

“So through all of these different volunteer positions not only did I find a sense of purpose again and people that I found so valuable, I found a whole other part of nonprofits in the social services,” Abend says.

This year Abend was hired away by a national nonprofit and is coordinating volunteers throughout northern New Jersey.

Abend says this is the most fulfilling job she’s had yet, because she’s not only making a living but also keeping up her part of the “social contract” to leave the world better than she found it.

The one thing these three personal profiles have in common is that the individuals involved courageously worked through their work-life crises by honestly reassessing every assumption they had about themselves and their place in the changing economy. When government policies and private enterprise failed them, they had to go beyond their comfort zone to explore new possibilities. It was through this painful, even humbling, process that they were able to re-invent themselves.

Contrast that with the deep denial our entire political system displays when it comes to facing the challenges of a world where the balance of power has shifted so dramatically from labor to capital, and from man to machine. The future will not be about “making America great again” but about how to forge a new society that works for all Americans again.