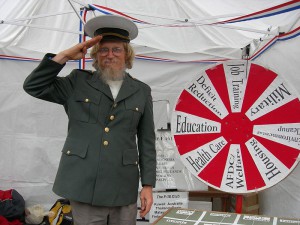 Anyone concerned about excessive government spending—and looking to make cuts to be financially prudent—would look at the biggest cost categories. Right? Wrong.

In all the talk about the outrageous salaries and benefits of teachers and government employees, how much discussion is there about the budget for the military and the spy establishment? Well, um, almost none at all.

How to explain the baffling talk gap? First off, the subject is complex and technical. (“Hmm..wonder what the Kardashians are up to….) Second, many of the details are secret. And third, we are told that this spending assures our safety—and who are we to question what the “experts” have prescribed? Of course, there are many other reasons, including the meticulous way in which military contracts are threaded into businesses in every congressional district in America.

Still, sometimes we must take off the blinders. So, let’s consider the following:

In a piece for the website TomDispatch, Christopher Hellman of the National Priorities Project says that the figure bandied around for the national security budget, $700 billion, is actually only a little more than half of the real figure. He starts including categories that are not usually included, like military retiree benefits, and the intelligence budget, and comes up with more than $1.2 trillion. He notes:

A country with a gross domestic product of $1.2 trillion would have the 15th largest economy in the world, ranking between Canada and Indonesia, and ahead of Australia, Taiwan, the Netherlands, and Saudi Arabia.

To take one example, how much of NASA’s proposed $18.7 billion budget falls under national security spending? We know that the agency works closely with the Pentagon. NASA satellite launches often occur from the Air Force’s facilities at Vandenberg Air Force Base in California and Cape Canaveral Air Force Station in Florida. The Air Force has its own satellite launch capability, but how much of that comes as a result of NASA technology and support?  In dollars terms, we just don’t know.

Other “known unknowns” would include portions of the State Department budget. One assumes that at least some of its diplomatic initiatives promote our security interests. Similarly, we have no figure for the pensions of non-Pentagon federal retirees who worked on security issues for the Department of Homeland Security, the State Department, or the Departments of Justice and Treasury. Nor do we have figures for the interest on moneys borrowed to fund veterans’ benefits, among other national security-related matters. The bill for such known unknowns could easily run into the tens of billions of dollars annually, putting the full national security budget over the $1.3 trillion mark or even higher.

Now, I will be the first to say that I don’t feel I have a good handle on what even a measly $700 billion actually means, much less $1.3 trillion. But it sounds like an awful lot. And therefore a good place to start for anyone complaining about what everything costs taxpayers these days.

By the way, depending on what figures you look at, we Americans spend somewhere around $1.1 trillion annually on all forms of education.

So, there’s something we can understand: give or take, about a 1:1 ratio between defense and education spending.