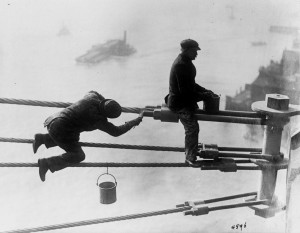 Why the ‘All Government Is Bad’ Movement….is Bad Some people are staunchly opposed to anything involving government, especially federal government, and it’s easy to respect their consistency. But as Emerson said, A foolish consistency is the hobgoblin of little minds.

While it’s not easy to assert that government today, as exemplified by, say, the 112th Congress, is capable of looking after our interests, actually, all smirks aside, it does a fair job a fair amount of the time. Our roads, bridges, airports, security, education, unemployment insurance, Social Security and Medicare, and much more are provided, fairly efficiently, through various levels of government. And despite the steady drumbeat of stories exposing official stupidity and worse, there are new examples every day for those who want to feel good about having to pay taxes.

Here’s one: the Food and Drug Administration’s new rules to combat food-related illnesses that have cropped up with alarming regularity and sickened tens of thousands of us each year:

Changes include requirements for better record keeping, contingency plans for handling outbreaks and measures that would prevent the spread of contaminants in the first place. While food producers would have latitude in determining how to execute the rules, farmers would have to ensure that water used in irrigation met certain standards and food processors would need to find ways to keep fresh food that may contain bacteria from coming into contact with food that has been cooked.

New safety measures might include requiring that farm workers wash their hands, installing portable toilets in fields and ensuring that foods are cooked at temperatures high enough to kill bacteria.

Now, some food producers will surely express outrage at this infringement of their rights and at the costs of the additional bureaucracy. They will hire lobbyists and public relations people and get friendly legislators to press their case that this development is actually not in the public interest. But it’s hard to argue that we consumers don’t really want these most basic health-protection measures.

Almost every day, members of Congress, that much-maligned institution, are actually proposing measures to deal with real problems that affect our well-being, and employees of federal agencies are working to establish rules and procedures to implement those measures.

To those who say they can do without government just fine—No, you can’t. You cannot make sure that a food processor keeps bacteria-contaminated uncooked foods away from prepared foods. You cannot ensure that farmers irrigate their crops with clean water. You cannot create an environment to make the people who handle your lunch wash their hands.

Of course, there are many examples of overzealous bureaucrats and regulation—and we’re reminded of these every day. Big institutions are, by their nature, often inefficient, incompetent and disrespectful of the individual. But that goes for the “private sector” as well—from the largest corporations down to the sole-proprietorships and so-called small businesses. Do you really believe the ads that claim your bank or your insurance company “cares” deeply about you?

The web has, sadly, seen an explosion of “news” sites that peddle hysteria, fear, and one-sided vilification of institutions like public agencies or public education — institutions that operate with severe handicaps but, that like Rodney Dangerfield, deserve a little respect. When the criticism is justified, WhoWhatWhy has been and will continue to be out front in documenting abuses. But we would not be doing our job if we didn’t also stand up for institutions, like the FDA in this case, that get it right.

By definition, we can’t have a functioning society unless we can agree on some things that affect us all—and then have an apparatus to carry out those agreements. We believe strongly that the government apparatus must represent us. If it does not, we seek to expose that fact. If it does, then we aim to strengthen it, make it more effective and more accountable—not to sabotage or destroy it.