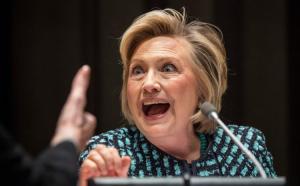 Why Every Day is Halloween Halloween is that time of year when the innocent don masks of monsters. But what we find especially interesting is that the reverse can also happen, and not just on Halloween: Monsters can don masks of the innocent.

In a special category are the politicians. The masks they wear are typically based on what masks they think the voters are wearing.

Here are just a few faces that show why, in some circles, every day is Halloween. Most are either politicians or spooks. For one reason or another, we find them all frightening.  But are any of them monsters? You be the judge. She linked Saddam Hussein to al-Qaeda, despite the lack of evidence, and voted for the war in Iraq. When that war proved to be unpopular, she said she “got it wrong.” But, more recently, she has been sounding even more hawk-like. Some people have called Hillary a “female version of Dick Cheney.” Is this the real Hillary? This is certainly a hawk but, there is also reason to believe this is a chicken. Five deferments?

The next face scares us because we do not really know who he is. And we wonder if he himself knows. Straining to get a vision.

If you wore a Pat Robertson mask to a Halloween party, it would scare the devil out of rational guests.  Although he has the friendly face and manner of a used car dealer, his his beliefs are hair-raising.  For instance, he believes that his prayers caused a hurricane to move away from his business. What is even more frightening is the fact that a large number of people share his beliefs—people who vote.

But when it comes to manipulating events in other countries, Robertson turns to powers closer to home:

“… if he thinks we’re trying to assassinate him [Hugo Chavez, president of Venezuela], I think that we really ought to go ahead and do it. It’s a whole lot cheaper than starting a war … We have the ability to take him out, and I think the time has come that we exercise that ability. We don’t need another $200 billion war to get rid of one, you know, strong-arm dictator. It’s a whole lot easier to have some of the covert operatives do the job and then get it over with.”  [How did he know!]

Before we show you the next collection of spooky people, we wonder if you have already felt their presence.

Do you ever feel as if you are being watched? You may be right. The people shown below are supposed to be watching over us, but they seem to be just watching us. Perhaps they believe we are the frightening ones. James Clapper, Director of the NSA A Harvard professor of law and close friend of Obama who appointed him Administrator of the White House Office of Information and Regulatory Affairs, a post he left in 2012.  In 2008, he published an article in the Social Science Research Network which included this provocative passage:

What can government do about conspiracy theories?

2. Government might impose some kind of tax, financial or otherwise, on those who disseminate such theories.

3. Government might itself engage in counterspeech, marshaling arguments to discredit conspiracy theories.

5. Government might engage in informal communication with such parties, encouraging them to help. Each instrument has a distinctive set of potential effects, or costs and benefits, and each will have a place under imaginable conditions. However, our main policy idea is that government should engage in cognitive infiltration of the groups that produce conspiracy theories, which involves a mix of (3), (4) and (5).”  [Emphasis added.]

Sunstein apparently imagined the target of this “cognitive infiltration” would not see these plans. Why publish a strategy that should only be whispered about behind closed doors? Are there people in charge of our security who are also this out of touch? That is scary. Nicknamed “The Skull,” he is best known for fiddling while New Orleans drowned. Secretary of Homeland Security under George W. Bush and co-author of the Patriot Act. Now involved with The Chertoff Group which he founded. They employ a stew of former members of the whole Beltway alphabet soup. From their website:  “Our principals have worked closely together for years, as leaders of the Department of Defense, the Department of Homeland Security, the Department of Justice, the National Security Agency and the CIA.” And they say, “When it comes to global security issues, the world’s most trusted media outlets look to The Chertoff Group for insight.”   Note: Those trusted media outlets do not disclose all they should about the Group, such as the fact that they represent the makers of body scanners. What else is he up to?

To understand the next face, you need to know where it may have come from (really!): Page from CIA Manual of Trickery

Does the face on the right remind you of anyone? “Appearing a little dumb can be the deceiver’s best friend.”  CIA Manual But is this the true face of George W. Bush? IMAGE: Shadow in the Grass