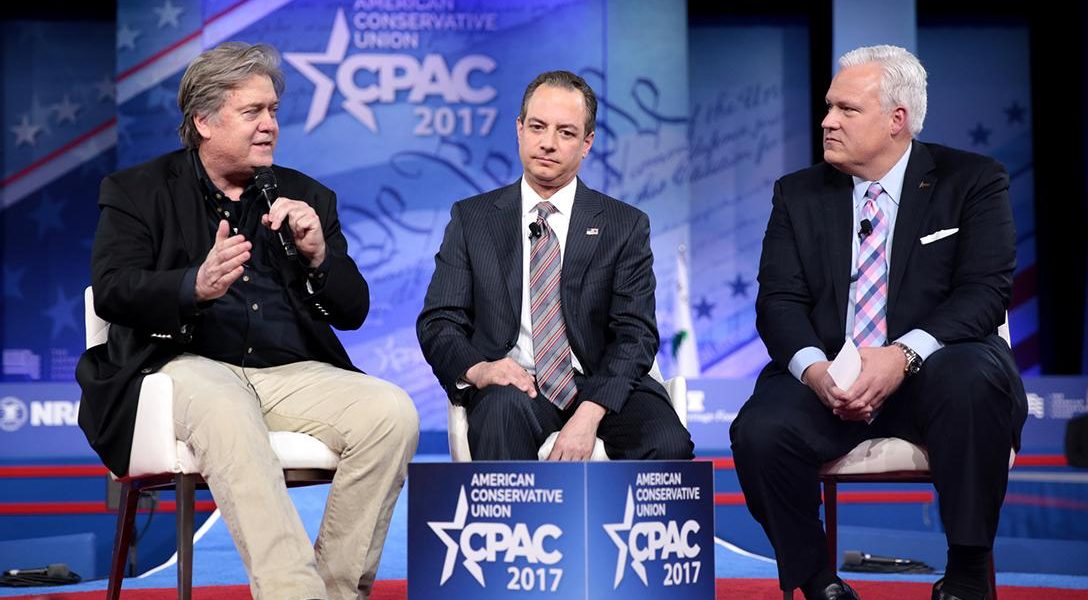 WhoWhatWhy at CPAC: Fissures Mask Unity of Trump’s Base

The alt-right took a public beating at last week’s Conservative Political Action Conference (CPAC), but the undercurrents of the conference show that the far right is welcome among conservatives, at least for now.

The tone of the conference was set by the executive director of the American Conservative Union (ACU), Dan Schneider, when he warned of infiltration by alt-right figures into the conservative movement. He described their ideology as a betrayal of conservative values, casting them as “left-wing fascists” — a tortured line of logic borrowed from National Review’s Jonah Goldberg. He labelled them anti-Semites, racists, and sexists, while also asserting that they are “not like anybody here.”

That would have sounded more believable had alt-right provocateur Milo Yiannopoulos not been invited to the gathering and been given a prominent speaking slot before being shunned after a video surfaced that appeared to show him defending pedophelia.

That kicked off a wider condemnation of the alt-right that culminated in Richard Spencer, the white-nationalist poster boy of the alt-right, being kicked out of the conference.

Spencer, who gained social-media prominence for the “Hail Trump” video following the election, is the leader of a white-supremacist think tank, The National Policy Institute. He wants the group, which is based in Alexandria, Virginia, just outside Washington, to be the hub for the alt-right.

As Spencer was being led away from CPAC, he fielded a number of questions, asserting that the alt-right remains a powerful force and that people “don’t want to talk to these boring conservatives. They want to learn about ideas whose time has come, not whose time has passed.”

Kicking out Spencer, however, does not explain why the equally provocative Yiannopoulos was invited to speak in the first place. Ostensibly, it had something to do with freedom of speech on college campuses; his speaking gig at UC Berkeley earlier this month was cancelled after violent student protests. But it is equally possible that the real motivation was his online popularity among right-wingers — plus the fact that Yiannopoulos is gay and an immigrant, which presumably gives conservatives all kinds of political cover.

In the end, his pedophelia comments were too much even for the publicity-seeking ACU President Matt Schlapp.

“We continue to believe that CPAC is a constructive forum for controversies and disagreements among conservatives, however, there is no disagreement among our attendees on the evils of sexual abuse of children,” Schlapp said in a statement on why Yiannopoulos was disinvited.

Even Spencer felt that Yiannopoulos had gone a step too far, saying, “I can’t defend Milo at this point.”  Yiannopoulos, who has resigned from his position as editor of Breitbart News, a highly successful right-wing media outlet, also lost a lucrative book deal.

So for a brief moment it might have appeared that the alt-right was on the outs. Two of its most famous faces had been pushed out of CPAC, and leading conservative voices were condemning the movement.

But then there was still Steve Bannon. The former head of Breitbart, who left the publication that he once called “the platform for the alt-right” to first win and then run the White House for Donald Trump, was front and center at CPAC. He shared a stage with White House Chief of Staff Reince Priebus and Schlapp.

Interestingly, Bannon’s associate Stephen Miller, who has been instrumental in Trump’s speech-writing and executive orders, was a college collaborator with Richard Spencer, as confirmed by a professor who participated with them in an on-campus debate on immigration.

Bannon remarked on the strength of the Trump campaign and presidency, as well as Trump’s commitment to fulfill his campaign promises. He also attacked the “corporatist, globalist media,” charging that its antagonistic relationship with the president was due to the fact that they are “adamantly opposed to [Trump’s] economic nationalist agenda.”

Bannon’s high-profile position seems to indicate that the alt-right continues to have a seat at the table, despite CPAC’s exile of Yiannopoulos and Spencer.

The question is whether its brand of “economic nationalism” will sit well with the financial backers of the conservative movement in the long run.