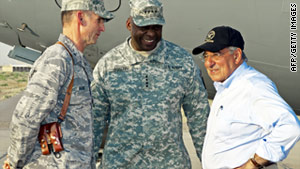 What Panetta Saw—and What We Got Panetta gets an expensive earful

What is the purpose and value of overseas trips for top officials? In a time when all eyes are on the deficit and cutbacks in non-essential expenditures are the order of the day, we need to more carefully scrutinize these trips, the statements that come out of them, and the benefits accrued.

Such is the case with Leon Panetta’s recent, unannounced trip to Afghanistan and Iraq.

Mr. Panetta arrived in Baghdad from Helmand Province, in Afghanistan, where he met with American Marines and Afghan Army soldiers at Camp Dwyer, a sprawling military base and the site of a busy medevac hospital in the southern desert. Mr. Panetta said he was encouraged by what he saw. “I think the bottom line is we are on the right path here,” he said.

That’s what he got out of the trip? He met soldiers and visited a base and military hospital? That created the anecdotal material leading to “was encouraged by what he saw”? Something he saw there convinced him that “we are on the right path here” in a way that information arriving for him at the Pentagon wouldn’t? How valuable is anecdotal material gleaned in a super-short, controlled stay, anyway?

More importantly, how much do these trips cost, and what do they accomplish? They’re mostly p.r. for the administration in power—getting substantial free media coverage and conveying a sense of someone being in charge.

Rockets hit Baghdad’s “heavily-fortified” Green Zone while Panetta was there—since he makes such an attractive target. The cost of protecting him, and cleaning up after such a visit—are of course substantial.

On his Iraq leg, he basically reiterated concerns about Iran supplying arms to Iraqi rebels that had already been expressed for years, and just last week by the American ambassador and the Chairman of the Joint Chiefs of Staff. Here’s The Times again:

Mr. Panetta’s comments, made a day before he is to meet with the Iraqi prime minister, Nuri Kamal al-Maliki, were aimed at urging the Iraqi military to take stronger action against Shiite militias and to see Iran as the Obama administration does — not just as a threat to American troops, but as a potential cancer in the country.

He hardly has to travel there to express that to al-Maliki, or to make a public statement there as a way of conveying concerns that are—duh—incredibly obvious to the Iraqis.

It’s unlikely that these statements will sway many Iraqis, who, in any case, don’t really want to hear an assessment of what is going on in their own country from a guy flying in from Washington. But Americans? Perhaps that is the real audience.

And, if so, a microphone in Washington should do the trick. Though the visuals won’t be as good, and there won’t be a captive media gaggle desperate to file stories.