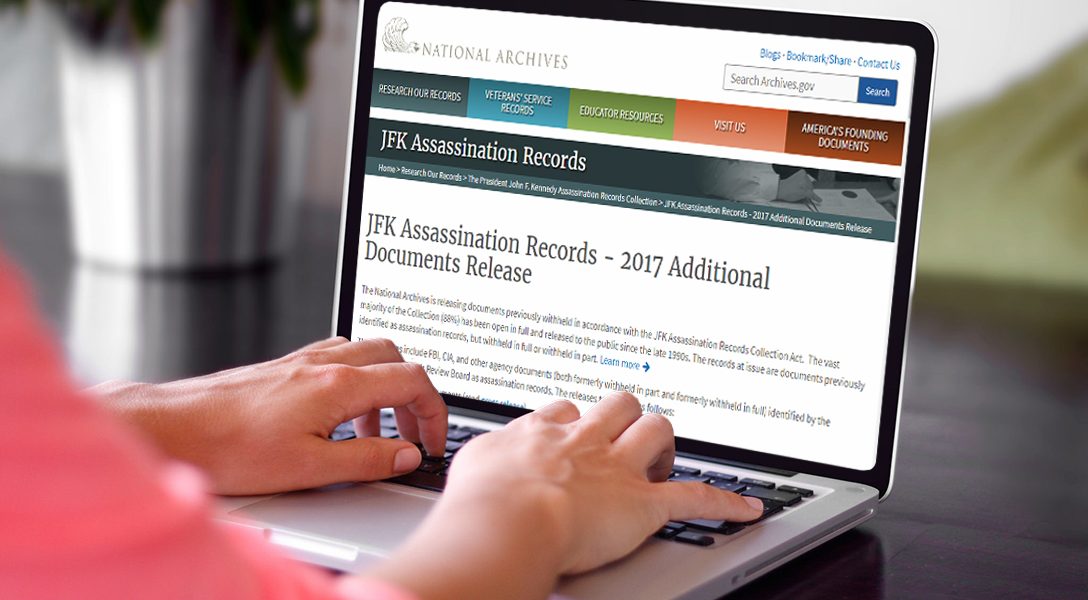 Trumped: The Mandate, the Media, and New Clues Amid the JFK Document (Un)-Dump

For those of us waiting since passage of the JFK Act of 1992 for release of the last withheld documents on President John F. Kennedy’s assassination, the news last Thursday was beyond anti-climactic. It was infuriating — and illegal.

Given that President Donald Trump seized the opportunity to be in Dallas for a GOP fundraiser, it was also an insult to the memory of Kennedy’s assassination in the same city almost 54 years before.

Clearly, elements of the CIA and FBI had done some last-minute arm-twisting. As night fell, Trump penned a memo saying: “I have no choice — today — but to accept [their] redactions rather than allow potentially irreversible harm to our nation’s security.”

This time-honored refrain followed several days of presidential tweets anticipating the release of almost 3,000 long-secret files, and announcing his “hope to get just about everything to the public!” In fact, the only power Trump had under the law was an ability to hang onto documents — and that he did, releasing a mere two percent — 52 government files previously withheld in full. The remainder, he said, would be subject to another six-month-long review process by the intelligence agencies.

Most of the media vastly overstated the amount of newly released brand-new material, while the major cable networks (including MSNBC’s Rachel Maddow) trotted out Warren Commission apologists like Phil Shenon and Gerald Posner for their “expert opinions” that Lee Harvey Oswald acted alone.

The New York Times did quote from a lengthy memo dictated by FBI Director J. Edgar Hoover right after Jack Ruby killed Oswald two days after the assassination. Of eyebrow-raising interest was Hoover’s flat assertion that Oswald’s murder was “inexcusable” considering “our warnings to the Dallas Police Department” — whatever that meant.

Hoover also noted “some rumors of underworld activity in Chicago” in Ruby’s background. This is the same memo partially released years ago that contained Hoover’s expressed desire to have “something issued so that we can convince the public that Oswald is the real assassin.” That is still de rigeur for New Yorker writer Adam Gopnik. While conceding that “the FBI, the CIA, and the rest were up to their armpits in bad acts that they were trying to keep concealed …” he nonetheless insists that “the Warren Commission is almost certainly the only plausible account of what happened on that day in Dallas.”

Gopnik doesn’t bother to mention the House Select Committee on Assassinations’ conclusion in 1979 that Kennedy was “probably assassinated as a result of a conspiracy” involving more than one gunman. Instead, he concludes with a backhanded slap at anyone who might dispute the Oswald-acted-alone hypothesis. “There is no ‘deep state’ that exists beyond the scrutiny of responsible citizens,” Gopnik claims to believe. “There is a cynical paranoia that always acts, and is meant to, as a pathogen to public trust.”

Why then are we not yet allowed to see the known — but still hidden — records emanating from and about CIA higher-ups such as James Angleton, David Atlee Phillips, and George Joannides? What was the point of releasing an Army file about Antonio Veciana regarding “‘Alpha 66’ Plans to Resume Attacks on Cuba” — with no mention of the CIA’s connection to the Cuban exile group and Veciana’s admission of having once met Oswald in the company of his own case officer?

The agency’s “bad acts,” these files reveal, went beyond numerous assassination attempts against Fidel Castro that involved leading mob figures and Cuban exiles. “We could develop a Communist Cuban terror campaign in the Miami area, in other Florida cities and even in Washington,” one CIA file says. “We could sink a boatload of Cubans enroute to Florida (real or simulated) … Exploding a few plastic bombs in carefully chosen spots … and the release of prepared documents substantiating Cuban involvement also would be helpful.”

WhoWhatWhy has assembled a team of researchers and experts to carefully scrutinize the releases, including an earlier set of documents made public in July. By early August, this website had already revealed that Earle Cabell, who as Mayor of Dallas oversaw the arrangements for Kennedy’s motorcade route, had been a CIA asset since the mid-1950s. The Mayor was also the brother of Charles Cabell, the Agency’s Deputy Director before JFK forced him to resign after the disastrous Bay of Pigs invasion. Over the coming weeks, context will be coming for files that would otherwise be overlooked. There is, for example, an intriguing memo from Hoover to LBJ aide Marvin Watson in the mid-1960s. It detailed the FBI’s intelligence about what the Soviet Union believed had happened in Dallas. This included the possibility that Johnson himself may have been complicit. Also, that Russian intelligence had rejected Oswald when the ex-Marine “defected” to Moscow in 1959, either as a US agent or a crazy. The Soviets suspected an “extreme right conspiracy” that included Oswald, even if only as a patsy.

Why was this kept secret for more than a half century? Perhaps because it might be seen as more credible than the Warren Commission’s conclusion that Oswald was a “lone wolf” crazy?

Similar questions are raised by an FBI file headed “Minutemen”—a well-known cadre of right-wing extremists —  dated November 9, 1964. Why was this document buried for over 50 years? In this file, a government informant (apparently a member of the Minutemen) describes something that occurred “about six weeks prior to November 22, 1963.”

Two men came to the informant’s door wanting “some ammunition.” The informant knew one of the men as a member of the Minutemen; the other he had never seen before. The informant dutifully granted the request for ammunition, and did not think “any more about it until November 22, 1964 [sic: clearly a typo for 1963] when [he and his wife] saw a newspaper photograph of Lee Harvey Oswald.

Both noticed a close resemblance between Oswald and the man who was with the MINUTE MAN a few weeks before. Both were afraid that he was Oswald and were afraid to say anything. Both said they felt the MINUTE MEN were involved in the assassination although they claimed that very little was said by members they knew following the assassination except to express satisfaction that it happened.

Later in the memo the informant’s government handler, identified only as “Dallas T-1,” describes picking up the informant almost a year later and driving him to a gun shop in the city operated by John Thomas Masen. They “observed several men in the front of the shop. The INFORMANT picked out MASEN from the group and identified him as the man that he thought was Oswald.” Dallas T-1, we know from earlier-released documents, was an Alcohol, Tobacco and Firearms agent named Frank Ellsworth. When I interviewed Ellsworth in 1976, he described an Oswald look-alike whom he had arrested on a firearms charge and then released a few days prior to the Kennedy assassination.

Ellsworth was convinced that when witnesses reported seeing someone they thought was Oswald practicing on a rifle range in the month leading up to the assassination, they were actually seeing this look-alike. Though Ellsworth refused to identify the look-alike as Masen, he didn’t argue with my speculation, based on other, then-available documents linking Masen to the Alpha 66 Cuban exile organization.

Another FBI file, dated March 27, 1964, quoted Masen about having “purchased about ten boxes of 6.5mm Mannlicher-Carcano … ammunition in early 1963.” That was the same type of rifle that Oswald had mail-ordered in March and that fired the bullets that are said to have hit Kennedy.

Of course, this raises the possibility that an Oswald look-alike was either involved in the assassination or was used to frame Oswald — who, it must be remembered, did not take credit for shooting Kennedy, but stated that he was a ‘Patsy.’

The new FBI memo confirming weapons dealer Masen as an Oswald look-alike is, perhaps, the first “smoking gun” among never-before-seen documents that raise more questions than they answer.

Dick Russell is the author of The Man Who Knew Too Much and On the Trail of the JFK Assassins.