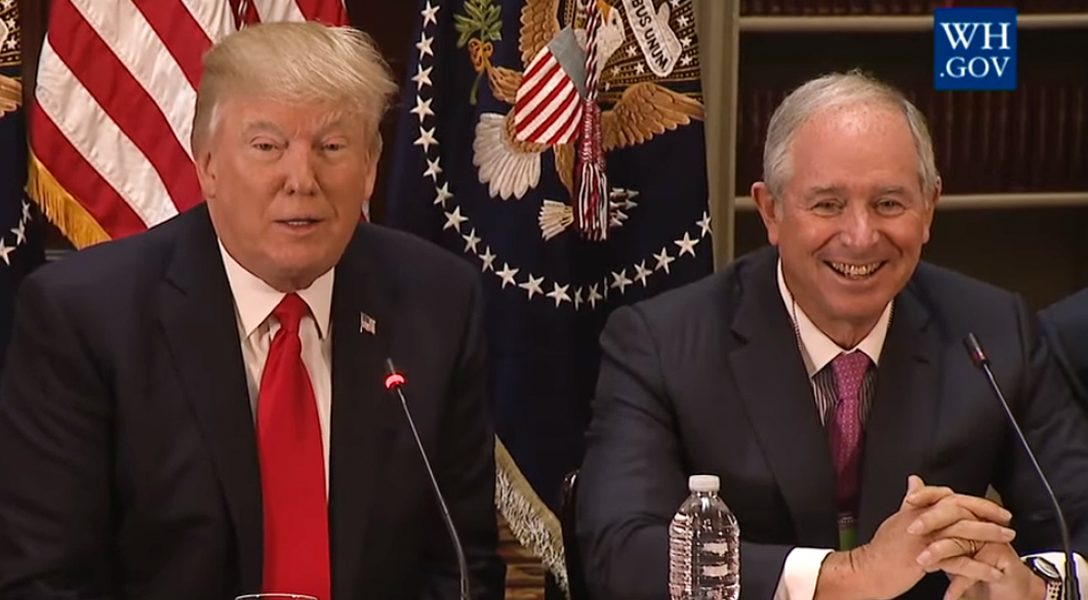 President Donald J. Trump introducing the Strategic and Policy Forum. Stephen A. Schwarzman, the chair of the Forum, is sitting next to the President. Photo credit: Adapted by WhoWhatWhy from The White House / YouTube
Government Integrity

Like many powerful executives, Stephen Schwarzman, CEO of the giant private equity investment firm, Blackstone Group, has a history of dealing with international leaders that have controversial records. The Washington Post recently referred to Schwarzman as President Donald Trump’s “China whisperer.”

It was an interesting read on how Schwarzman is trying to influence the administration’s China policy. But it was also a curiously incomplete account of the ties he maintains across the world — including to Russia.

This is surprising in light of the keen scrutiny given to the ties other people close to Trump have to Russia — especially since, unlike some of the players in Russiagate, Schwarzman’s connections are at the very highest levels.

It must be stressed that everything presented below may just be business as usual, and not suggestive of anything illegal or unethical. But the particulars are striking enough to warrant a closer look. WhoWhatWhy has been exploring aspects of this story for nearly a year, and thought it time to lay out what we can tell you thus far.

A colorful character, whose large living graces the gossip columns, Stephen A. Schwarzman has been good friends with Trump for years. He chaired the president’s short-lived Strategic and Policy Forum.

Trump’s daughter and son-in-law were at Schwarzman’s legendary 70th birthday celebration representing Trump (who was with the Japanese Prime Minister) — and Schwarzman recently huddled with Trump at his Florida compound following a particularly tough week for the president. Parallel to that friendship is business; Blackstone has been a significant force in Jared Kushner’s family real estate deals.

For some years, Schwarzman has also had a friendly relationship with the Kremlin.

In 2011, then-Russian President Dmitry Medvedev and then-Prime Minister Vladimir Putin kicked off the Russian Direct Investment Fund (RDIF), a $10 billion private equity fund aimed at boosting foreign investment in Russian companies and state assets, and turning Moscow into a global financial center. Schwarzman served on the international advisory board, which meets once a year to discuss the market environment, though it does not participate in the fund’s operational activities. “It’s always good to have friends when you are going to a place that you are not as familiar with,” Schwarzman announced upon joining the board. He left in 2014, as Trump was preparing for his presidential campaign.

Schwarzman has piloted Blackstone through international deals that have earned billions of dollars, employing precisely the kind of investments one would expect of an international private equity firm.

But Blackstone and Schwarzman made some unwanted news with the release, in November 2017, of the so-called “Paradise Papers” — hacked documents from the offshore law firm Appleby. Among the millions of documents released were a batch showing Blackstone had used offshore shell companies to hide income from UK tax collectors. As the Paradise Papers’ 2016 predecessor, the “Panama Papers,” show, Blackstone invests in InterTrust/Walkers Management Services, an offshore company in the Cayman Islands, which facilitates the filing and management of opaque offshore shell corporations. Blackstone’s offshore financial holdings came into focus earlier this month with the growing attention to the Trump and Kushner families’ large foreign financial entanglements. Is Blackstone just one more brick in the Trump/Kushner oligarchical support network — or something more?

Several experts we showed our material to — including a former senior Senate investigator and an IRS investigator, both with experience dealing with international finance and money laundering — agreed that this all bears a closer look.

Here is a timeline of interesting developments: They show the degree of interconnection among key players propelling Trump (with his still mysterious pro-Putin bent) into the White House. Again, we are not aware of any wrongdoing and are not asserting that any took place.

Putin hand-picks Kirill Dmitriev — a former Goldman Sachs banker — to run the RDIF, initially set up as a part of the VEB, a bank that will later figure in the investigation of Russian help to Trump’s campaign.

Schwarzman’s firm begins lending to the Kushner Companies. Over time, it will become one of the firm’s biggest lenders, providing more than $400 million in financing in four separate deals.

Blackstone, along with Deutsche Bank AG, provides loans for Kushner and CIM Group to purchase a Manhattan office building at 2 Rector Street.

The Kushner Companies and real estate investment firm RFR purchase five of six Jehovah’s Witnesses warehouse and printing properties in Dumbo — an upscale Brooklyn neighborhood — for $375 million, in what becomes the borough’s largest transaction of the year. Natixis Real Estate Capital loans Kushner’s consortium, which included Blackstone, $249 million to finance the deal. (Blackstone was among the undisclosed partners.)

The Kushners purchase the retail space of the old New York Times building in New York City for $296 million. Four years earlier, Blackstone had purchased the upper 12 floors of the old building, which are used for offices, for $160 million.

Kushner Companies and partners buy the iconic Watchtower building in downtown Brooklyn. (Formerly the Jehovah’s Witnesses’ world headquarters, it is not to be confused with the organization’s other properties that the Kushner Companies bought in 2013). They receive $376 million in loans from a Blackstone-controlled company. This sum represents the largest loan made for such a purchase in New York City that year.

Trump appoints Schwarzman to serve on the President’s Strategic and Policy Forum. But, like Trump’s “Voter Fraud Commission,” this group will have a short life and be disbanded in the first year of Trump’s term. (There is some disagreement between the White House and Schwarzman over just who pulled the plug first: the members or the White House. It was not an acrimonious split, but rather recognition by both that the commission really had not been given anything important to do.)

Just days before Trump takes office, his associate and advisor Erik Prince meets with Kirill Dmitriev, a Russian representing Putin, in the Seychelles islands. This is the same Dmitriev who ran and still runs the Russian investment fund that Schwarzman advised.

The Seychelles meeting will become of apparent interest to Special Counsel Robert Mueller as something more than the unplanned encounter Prince originally claimed it to be.

Blackstone has positioned itself better than almost any other private-equity firm to capitalize on Trump’s victory, particularly his long-stated plan to use private money to leverage around $200 billion in public funds for domestic infrastructure projects.

Though no longer part of Trump’s now defunct business council, Schwarzman continues to advise Trump on policy issues ranging from trade to infrastructure.

Schwarzman, who became chair of Trump’s business-advisory council in December, is seen in Saudi Arabia with both Trump and Kushner during a presidential visit.

Blackstone expects to use the $40 billion in its infrastructure fund to invest in $100 billion of projects. Company president Tony James tells the New York Times that this deal could allow Blackstone to “establish overnight a leadership position” in infrastructure. Blackstone’s stock rises more than seven percent when the Saudi deal is announced.

Kushner meets with an official of Apollo, the investment firm of Leon Black — another Putin advisor — at the White House. (Black and Kushner were already friendly, having sat together at the US Open just prior to the 2016 election.)

Six weeks after the White House meeting, Apollo extends a $184 million loan to the Kushners. As ABC News reported, the SEC advised Apollo it had concluded its inquiry on December 23, 2017. As is customary, no reason was given.

Trump vigorously criticizes and stalls a round of sanctions against Russia that Congress passed in July 2017; in January, he had declined to impose additional restrictions. However, as it is clearly impossible to overturn the sanctions, Trump and Trump-friendly firms with ties to Russia have long since pivoted to lucrative opportunities elsewhere.

The Apollo loan attracts the attention of congressional Democrats. On March 8, a group of four Democratic lawmakers, Sens. Elizabeth Warren (MA), Thomas Carper (DE), Gary Peters (MI), and Rep. Elijah Cummings (MD), send a letter to Apollo CEO Leon Black demanding all the documentation Apollo has on this loan, including “ … whether any debt financing provided by Apollo involves any foreign financing or guarantees; and whether any entities lending to Kushner’s companies are owned or controlled by foreign companies.”

The controversial so-called “privatization” of a portion of the Russian oil company, Rosneft, to Glencore PLC is one of the most opaque deals of this decade. Glencore (short for Global Energy Commodity Resources) is an Anglo–Swiss multinational commodity trading and mining company with headquarters in Baar, Switzerland, and a registered office in Saint Helier, capital of the British tax haven island of Jersey.

International oil industry analysts have dubbed the $11 billion 2016 deal a “sham transaction” designed to move Russian state money to persons and places unknown. It is one of the most complex and opaque transactions we have ever tried to unravel. What little we know is troubling. What we don’t know possibly even more so.

Reached for comment on the deal, a spokeswoman for Blackstone stated categorically that, “Blackstone played no part in the Rosneft deal.”

That careful characterization, however, does not address all actual or possible links between Blackstone and Roseft. Here are some examples:

A request for comment, and for an interview with Schwarzman, made to the Blackstone media relations office, was acknowledged but not addressed by press time.

We welcome anyone who has more information or insight on this topic to contact us.

Claire Wang contributed to this article.