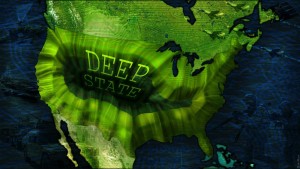 Is There a “Triple Government” at Work? The Deep State. By DonkeyHotey

“Double government.” Walter Bagehot coined the term in his 1867 book, The English Constitution. He hypothesized that British government had split into two separate layers. On the outer surface were high-profile “extrinsic” institutions such as the House of Lords, which gave the appearance of being in charge. On the inside were less conspicuous organs of government, such as the House of Commons, that actually ran the show.

Expanding upon Bagehot’s ideas is Michael J. Glennon, a professor of international law at Tufts University. Glennon has written “National Security and Double Government“, a book which argues that a similar double government has emerged in U.S. politics.

But are elected officials such as the President truly hostages to murky, unseen elements within government?

Congressional investigations, leaked classified documents, and statements by former intelligence officers paint a completely different picture. Far from being out of control, the public record indicates that security services are obedient arms of the executive. And, further up the chain of command, the executive itself is responsive to profound sources of private influence residing outside of government.

In the 1970s it came to light that the CIA, contrary to its charter, had been heavily involved in a domestic operation known as MH/CHAOS.

A series of formal investigations, one led by Senator Frank Church and another by House Representative Otis Pike, followed and arrived at the same conclusion with regard to chain of command. The Pike Committee report stated that the CIA was “utterly responsive to the instructions of the President.” Likewise, the Church Committee found that “the President has had, through the National Security Council, effective means for exerting broad policy control over at least two major clandestine activities—covert action and sensitive technical collection” and that the CIA was “not ‘out of control.’”

Members of the executive branch have admitted as much. For instance, then-Secretary of State Henry Kissinger told the Pike Committee that “every operation is personally approved by the President.”

In an important recent instance, the Senate Intelligence Committee’s summary report on the CIA’s torture program infers that the CIA intentionally misrepresented it to politicians. But high-ranking administration members themselves, notably former Vice President Dick Cheney explicitly rejected the idea that the president wasn’t told what was happening.

Former CIA officer Philip Agee offers insight into the institutional dynamics at play with regard to the myth of a rogue agency in his expose “Dirty Work”:

For all the recent horror stories, one finds little evidence that a majority in Congress want the responsibility for control, while the executive branch continues to insist—rightly—that the Agency’s covert action operations have, with very few exceptions, followed the orders of successive presidents and their National Security Councils.

The classic conspiratorial worldview is based on the assumption that our system of government would function properly if only we could round up all of the troublemakers. But to adopt this mindset is to ignore the pivotal role of money in politics. Far from being just the handiwork of several hundred power-hungry bureaucrats, there are more pervasive structural forces in play that define how our political system operates.

A trial attorney for the Securities and Exchange Commission made just this point in a speech at his April, 2014, retirement party. He drew a connection between his superiors’ intent to secure high-paying post-government jobs and their inability or unwillingness to rein in banking executives after the 2008 financial collapse.

Given this dynamic, is it surprising that Barack Obama’s largest private sector campaign contributor during the 2008 Presidential election was Goldman Sachs? Indeed, the very same banking house provided Obama’s primary opponent, Hillary Clinton, close to half a million dollars, purportedly in exchange for nothing more than giving a couple of speeches.

The battle for dominance was joined by billionaire Tom Steyer in the 2014 elections. He spent about $65 million to run a long series of ad placements focusing on the threat posed by climate change and supported like-minded Democratic candidates.

The above are examples of the Investment Theory of Party Competition, which views the political arena as overwhelmingly dominated by corporate factions that leverage their resources to influence policies. Supporting this theory, professors Martin Gilens of Princeton and Benjamin Page of Northwestern argued in a journal article that:

The thoughtful reader is saying, “none of this is very surprising—or new.” And yet, our media and other institutions continue to blame government or those in it for the degraded state of democracy, ignorant of how this history informs the present. They also fail to acknowledge that private capital doesn’t only shape generalized policy—it also works with government on highly specific, and sometimes lethal, projects of self-interest.

These began almost the moment the new CIA was up and running. British-dominated oil interests, infuriated by Iran’s nationalization of their assets, demanded and got a joint CIA-MI6 coup, of course rendered surreptitiously. The next year, it was the U.S.-based United Fruit, this time asking government to rescue its possessions in Guatemala with another putsch. In both cases, long-playing trauma, violence and instability resulted, affecting Americans and the world for decades to come.

In the aftermath of the trillion-dollar global war against terror in Iraq and Afghanistan, it’s difficult not to see that Iraq has a large swathe of its landmass currently occupied by thousands of Islamic State jihadists, or that Afghanistan is essentially a narco state that’s producing 90 percent of the world’s heroin.

While there’s still debate among commentators as to whether U.S. invasions have foiled or incited future 9/11 plots, there is little argument that the global war on terror has been a godsend to arms dealers, the fossil fuel companies that gained access to what were nationalized oil fields, and to contractors—many with links to the Bush White House—that made more than $138 billion rebuilding what had been destroyed. [v]

Former CIA officer John Stockwell summarizes the nature of the relationship between the corporate elite and American intelligence services:

The CIA and the big corporations were, in my experience, in step with each other. Later I realized that they may argue about details of strategy—a small war here or there. However, both are vigorously committed to supporting the system.

While most institutions suffer from some form of dysfunction, it’s clear that both the Pentagon and the American intelligence community largely do what they’re told by POTUS. In the absence of overwhelming public sentiment, the President mainly attends to the needs of various corporate factions which have the ability to provide incentives to political leadership. These business interests transmit their mandates to the political class through a structural layer of intermediaries that surround the visible state, the “Deep State” first described by Peter Dale Scott.

In other words, the remarkable continuity of national security policy isn’t entirely a matter of double government; equally, it is a matter of state capture by deep sources of wealth and power outside of government.

Perhaps Bagehot would have called this American power structure a Triple Government.