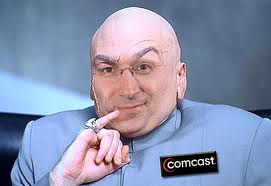 The Urge to Merge-And Some Questions So the Comcast-NBC merger is almost certainly going through, says the Washington Post

The chairman of the Federal Communications Commission issued a draft order approving Comcast’s proposed merger with NBC Universal on Thursday, putting the deal up for vote before the agency’s other members.

Senior FCC officials said in a news conference that the merger presented five areas of concern but was ultimately deemed by staff and Chairman Julius Genachowski to tilt in the favor of public interest. Approval would come with several conditions related to Internet video distribution of NBC and Comcast content and the sharing of shows to competing cable and satellite firms. The merger would also have to ensure that competing networks get on Comcast’s platform.  [Italics added for emphasis]

Such articles would be much more helpful if they explained how often the FCC does not find mergers to benefit the public interest.

The Justice Department is conducting a separate review to see if the deal passes antitrust laws. The antitrust arm of Justice hasn’t commented on the status of its review. A source familiar with the agency’s thinking said Thursday that Justice officials have been working closely with FCC staff, but that the companies haven’t fully committed yet to promises that would assuage concerns the deal could squash developing competition in the video space.

Again, one wants more information. How often, do you think, Justice Department concerns over antitrust law block the FCC’s intention to approve a merger? (Readers, if you know the answers, please comment)

…The merger of the nation’s biggest broadband Internet and cable service provider and a media giant with television, movie and broadcast station assets has elicited criticism from public interest groups and competitors.

….Competitors and public interest groups have expressed concern that Comcast, the nation’s biggest broadband and cable company, could unfairly withhold NBC shows and movies from Internet video platforms such as Netflix and Apple TV. Critics have urged the FCC to ensure that Comcast not withhold that content from new platforms for consumers who may want to get all their video news and entertainment through the Internet. They point to Comcast’s competing Internet video strategy, called Xfinity, as a threat to newcomers. Xfinity provides Internet versions of television shows and movies but only to consumers who subscribe to both Comcast cable and broadband Internet services.

This all sounds technical, wonky and insidery, but one major issue not discussed, is this: NBC was controlled by General Electric, a large defense contractor and polluter. Now it will be controlled by the giant cable company Comcast, with its own history of controversy. NBC is an extremely important shaper of public opinion-it owns, for example, not just the Nightly News, but also the Today Show, and that rare source of liberal opinion, MSNBC.

We need to ask: What are the views and attitudes of the leading figures behind the Comcast corporate façade? How will this merger affect public understanding of complex issues? Will Comcast be more or less likely to allow diverse opinions and the airing of controversial news stories about powerful figures and entities? Do FCC reviews seriously explore anything like that? And why is Obama not taking a position on this?