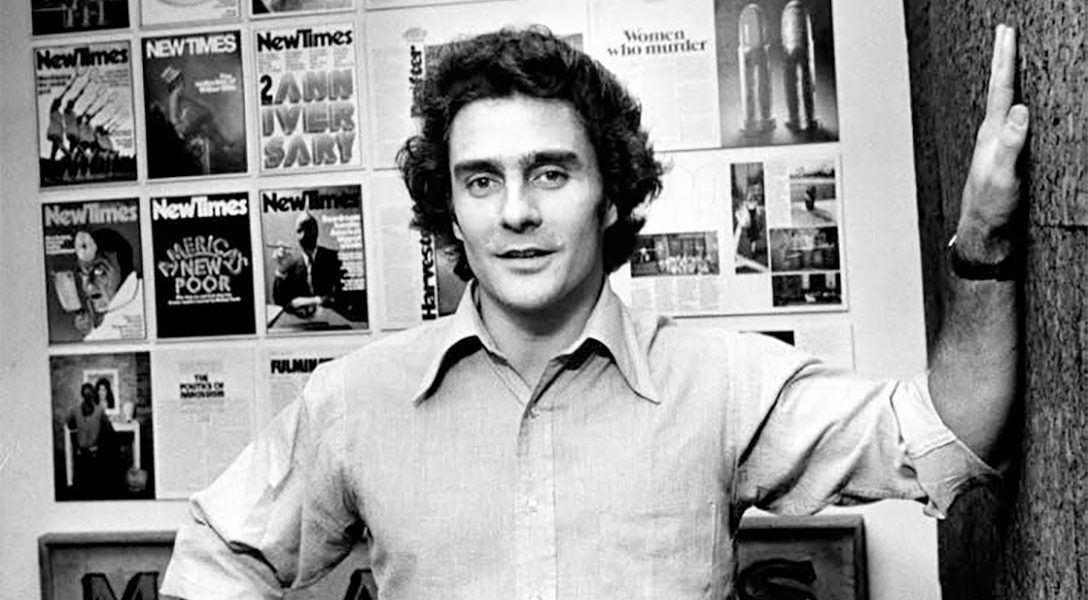 Another excerpt from Jon Larsen’s book, The Perfect Assignment: A Memoir of Journalism in the Golden Age. As you will see, this short excerpt contains some pretty funny moments, as well as insights into the process of investigative journalism.  Be sure to read the first (“The Captive and the Spy”) and second (“Heroin, the Vietnam War, and Body Bags”) installments of the book.

Jonathan Z. Larsen began his journalism career at the West Hartford News while still in college. In 1963 he became a corporate trainee at Time Inc., the company his father had served as president for over 20 years. Larsen worked his way from a junior rewrite editor in New York to a general correspondent in the Time-Life News Service. In 1966 he was sent to Chicago, then two years later to Los Angeles as the magazine’s show-business reporter. In the fall of 1970 he was sent to Saigon as Time’s bureau chief. From there it was on to other news organizations, including serving as editor of the award-winning New Times magazine and editor in chief of the Village Voice.

Chapter 31 (“Giving Congress a Hotfoot”) from The Perfect Assignment: A Memoir of Journalism in the Golden Age by Jonathan Z. Larsen (TidePool Press, Cambridge, MA, 2020)

Within a week of my arrival, I would light the fuse for New Times’ first big explosion. A friend from my Hollywood days, Karl Fleming of Newsweek, had dropped by to wish me luck. Fleming had covered the civil rights movement from the front lines and then moved on to Newsweek’s Los Angeles bureau. In the aftermath of the Watts riot of 1965, he had been set upon by a group of angry blacks, who broke his jaw, fractured his skull and left him in a pool of his own blood. Fleming may have been bloodied but he remained unbowed, still outrageously handsome and full of pluck.

As we sat around my office trading stories, he suggested that we publish an article on the country’s dumbest politicians. He even had a title in mind: “The Ten Dumbest Congressmen.”

Within hours, I was on the phone with Nina Totenberg, our one-woman Washington bureau, laying out the story. I not only wanted her to find the dumbest congressmen, but also to report out a thoroughgoing indictment of each. Totenberg did much of her reporting clandestinely, but even when people figured out what she was up to, they were generally cooperative.

Scott was known to go through staff like toilet paper. Before he reached Congress, the long-suffering secretary in his law office complained that the old paperclips he forced her to use were rusty and left marks on her letters. She wanted to buy new ones. Nonsense, he said, as he proceeded to wash the paperclips and spread them out on his desk to dry, ensuring further rust.

We put “The Ten Dumbest Congressmen” on the cover. The photo was a stock shot of Virginia Senator William Scott, whom we crowned “The dumbest of them all.” Our story incensed a lot of people — I was practically assaulted by my hostess at a dinner party in Vermont not long after — but it delighted far more. Totenberg had discovered that Scott was known to many about Washington as “Dread Scott” for his racist views. He had once famously opined, “We only need zip codes because n*****s can’t read.”

Scott was known to go through staff like toilet paper. Before he reached Congress, the long-suffering secretary in his law office complained that the old paperclips he forced her to use were rusty and left marks on her letters. She wanted to buy new ones. Nonsense, he said, as he proceeded to wash the paperclips and spread them out on his desk to dry, ensuring further rust.

Shortly after our issue came out, Senator Scott did us an enormous favor that would enhance the reputation of New Times for years to come: He called a Washington press conference. Even better, he chose to not speak himself, but instead sent his son out to announce to the assembled journalists, “My father is not stupid.”

In law there is a concept called res ipsa loquitur: The thing speaks for itself. Scott’s press conference proved our story. The humorist Art Buchwald, a popular public speaker of the day, happened to be present and wrote it all up in his nationally syndicated column. He would continue to tell the story to audiences all across the country for years. In Buchwald’s version, New Times had “only a circulation of about 40 readers” before Scott advertised both our story and his own stupidity to the nation.

By mid year, we published a second Totenberg piece, this one taking the reader behind the scenes at the Supreme Court, which Totenberg likened to a southern plantation in its demeaning treatment of its employees. It was undoubtedly a good enough story to make the cover, but got aced out by what I thought an even better one, a medical exposé by a young investigative reporter named Amanda Spake. It may well have been the first time in history that a magazine cover choice had come down to competing stories from two female investigative reporters.

In her mind-boggling exposé, “Prescription Payola,” Spake proved that the country’s doctors were being systematically bribed by pharmaceutical companies to prescribe drugs regardless of whether they were safe, effective, or appropriate: “To many doctors,” Spake wrote, “a prescription slip is like a trading stamp — another step towards a color television set, an upright freezer … or your premature death.”

The article asserted that the pharmaceutical industry, in its zeal to influence medical practice, was spending an astonishing $5,000 annually on each of the nation’s 200,000 doctors. That would come to $4.4 billion a year in today’s dollars.

That fall, Wilbur Mills, the rectitudinous chairman of the House Ways and Means Committee and one of the most powerful men in government, had been found by Washington, D.C., police at 2 AM alongside the capitol’s Tidal Basin, his glasses shattered and his face bloodied, while an Argentine stripper who went by the name of Fanne Fox was discovered splashing about nearby, sporting two new black eyes.

Even if we had been so inclined, no magazine staff can produce investigations issue after issue. Our niche, beyond the realms of investigative and enterprise journalism, was that we were able to match young writers to subjects that interested our young readers. That summer and fall Roger Simon visited a doomsday cult in Stelle, Illinois, that was placidly preparing for the end of the world in the year 2000; Jesse Kornbluth hung out at Muhammed Ali’s training camp in Deer Lake, Pennsylvania, for an elegiac cover story; and Stephen Diamond chronicled Sam Lovejoy’s Thoreau-like act of civil disobedience, toppling a nuclear test tower in Western Massachusetts, a story he subtitled “a New Age morality play in three acts.” When Tom Moore handed me the manuscript, it was so good it gave me goosebumps.

Over the course of that year and the next we would introduce other bylines that would become closely associated with the magazine, among them Robert Sam Anson, who wrote on a bewildering array of topics but perhaps is best remembered for articles that reexamined the JFK assassination; Robert Ward for his signature portraits of con men, car salesmen and pornographers; Paul Slansky for short humor pieces drawn from his inexhaustible archive of quotes and press clippings; Ron Rosenbaum for his portraits of Abbie Hoffman as a fugitive and his investigation into the murder of JFK’s mistress, Mary Meyer; Ruth Rosenbaum for her multiple exposés of the medical establishment; and Michael Parfit for entire issues on Alaska and “America’s New Poor.” To report the latter, Parfit flew to nine states in his single-seater Mooney Mite, one of the smallest planes ever manufactured. The result was nominated for reporting excellence at the National Magazine Awards.

The year of 1974 ended with a literary flourish. That fall, Wilbur Mills, the rectitudinous chairman of the House Ways and Means Committee and one of the most powerful men in government, had been found by Washington, D.C., police at 2 AM alongside the capitol’s Tidal Basin, his glasses shattered and his face bloodied, while an Argentine stripper who went by the name of Fanne Fox was discovered splashing about nearby, sporting two new black eyes. Both Mills and the stripper were married to others.

The next day I spoke by phone with Marshall Frady, one of the marquee writers who had signed on at the beginning, and fortunately, had stayed on. Frady lived in Rembert, South Carolina, and I always had to use an elaborate code to outmaneuver various ex-wives and girlfriends to reach him. We agreed that the scandal could make a wonderful cover story. After two months of reporting he delivered a stunning parable of Washington power and corruption. His 6,000-word article likened the romance to the 1930 film The Blue Angel, with Wilbur Mills playing the part of Josef Von Sternberg’s German schoolmaster and Fanne Fox that of the cabaret performer Lola-Lola, the role which had launched the career of Marlene Dietrich.

As Frady followed Fox and Mills about, week after week, the story only got richer, darker, and more surreal. His reporting trail finally led to a Boston strip club where he would find Mills in his suit and Fox in her G-string, standing on stage together: “And then, suddenly and incredibly, on that last night, Mills was there himself — actually materializing on stage with her, braying to the audience, his bifocals glinting in the stage light, ‘She’s my little Argentine hillbilly, and I’ve come to see her dance.’”

For a cover photo we recreated a Blue Angel scene against a smoky blue background. Somehow we managed to persuade Annabella Battistella herself — Fanne Fox’s real name — to come to New York to pose in her G-string and pasties. There was considerable consternation when she did not show at the appointed time — I am sure I gnawed through most of my fingernails as I stared at the  doorway — but finally, two hours late, she walked into Carl Fischer’s studio, her scant costume in her handbag. Exclaimed an incredulous Fischer: “She was later than any celebrity I have ever photographed!”

We posed her on top of a round table draped in a red-and-white checkerboard cloth; before her, in obeisance, with a champagne bucket at the ready and a cigarette-cum-cigarillo holder held at a jaunty angle, we seated a male model who looked from the back exactly like Wilbur Mills. A week or so later Hirsch [George Hirsch, publisher of New Times] received a letter from God himself, George Lois, the art director at Harold Hayes’s Esquire, who for ten years had lured me and thousands of other readers with his brilliant covers.

“The Mills cover was absolutely great,” Lois wrote. “It’s the first cover I’ve seen since I did the Esquire covers that I wish I had done.” In the mailbox around the same time was a private note Bill Moyers wrote to Hirsch: “That’s some magazine you’re putting out, with some of the most provocative writing and ideas anywhere, and I simply wanted to congratulate you for making it work.”

At the end of the year, Hirsch and I went to dinner to celebrate. When I got home, I wrote him a letter:

George, I hope you enjoyed our dinner as much as I did. I’m still
a little loaded, so I thought I would type out a thought I would
probably never be able to say in person: I think you have done
a hell of a job, and have been an inspiration to us all. You have
been terrific with me, and I can’t tell you how much I realize it and
appreciate it. I don’t know how you found me, but I am glad you
did. Yours, for another fruitful, and this time profitable, year!