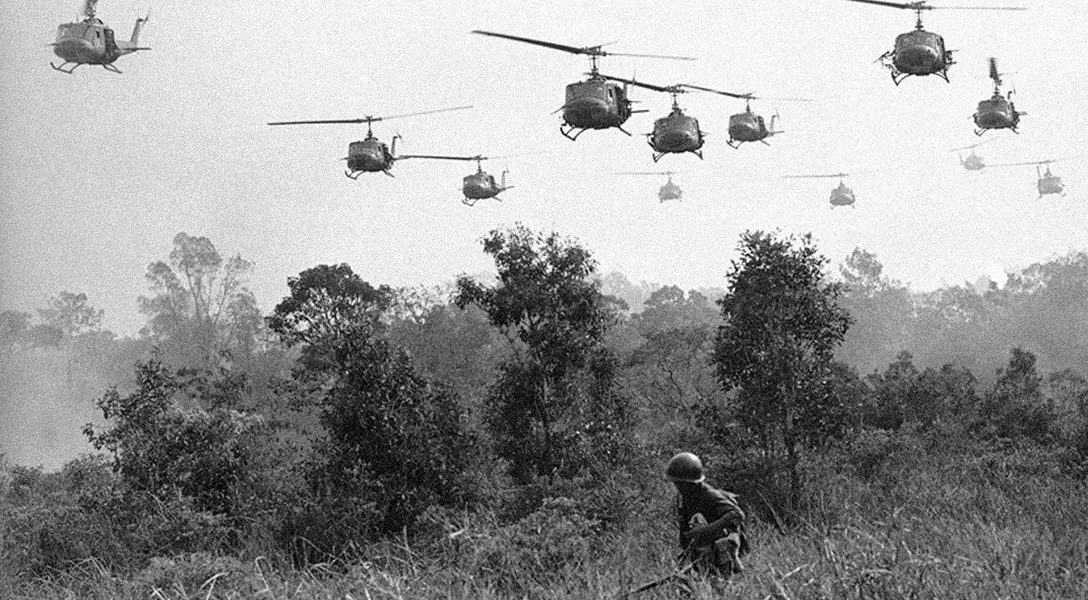 This is the second installment of our three-part series from Jon Larsen’s book, The Perfect Assignment: A Memoir of Journalism in the Golden Age. The first installment — The Captive and the Spy —  has the charm of a Le Carré novel, but the content of this one is brutal.

The excerpt below is about the “near total disintegration” of the US armed forces as they were sucked into the black hole of heroin, and all the horrors that came with it. As Larsen put it, “Our troops were in so deep that an external enemy was barely required.”

Jonathan Z. Larsen began his journalism career at the West Hartford News while still at college. In 1963 he became a corporate trainee at Time Inc., the company his father had served as president for over 20 years. Larsen worked his way from a junior rewrite editor in New York to a general correspondent in the Time-Life News Service. In 1966 he was sent to Chicago, then two years later to Los Angeles as the magazine’s show-business reporter. In the fall of 1970 he was sent to Saigon as Time’s bureau chief. From there it was on to other news organizations, including serving as editor of the award-winning New Times magazine and editor in chief of the Village Voice.

Chapter 27 from The Perfect Assignment: A Memoir of Journalism in the Golden Age by Jonathan Z. Larsen (TidePool Press, Cambridge, MA, 2020)

When my colleague Jim Willwerth left for assignment in Vietnam earlier in 1970, a senior editor had offered him a lukewarm send-off, along with these words: “It’s still a story … I guess.”

In my first month or so it seemed perhaps that the Time editor was right. But even before the combat war heated up during the next dry season with the invasion of Laos, there was a largely unreported story unspooling before me: the near total disintegration of the armed forces of the United States. As one military historian would put it, the army during the final years of Vietnam had suffered “a collective nervous breakdown.” John Steinbeck’s claim that “Vietnam drew everyone down into the vortex” now applied to our armed forces. [Ed: John Steinbeck IV, is the son of the writer of the same name.] Larsen on the way to a story in a Bell “Huey” helicopter. Photo credit: Jonathan Larsen

Our troops were in so deep that an external enemy was barely required. In one 79-day period there were seventy-five drug overdoses, mostly from heroin, which in Vietnam was available in such purity that injecting it uncut meant almost certain death. Drug overdoses were only part of the problem. Other self-inflicted wounds included lack of discipline, desertion, racial tensions, and moral turpitude. Not long after my arrival, I reported that American armed forces began to experience more casualties from “non-combat-related” deaths than from the enemy. Over the previous year, the mortality rate from non-hostile causes had risen by almost thirty percent.

In Chicago I had witnessed a police riot, an oxymoron if there ever was one. Here in Vietnam was another: “friendly fire.” In addition to the mistakes that attend every war, there was a relatively new curse known as “fragging,” the murder or attempted murder of a senior officer. Topping off the numbers were suicides, motor vehicle fatalities, and drug overdoses.

Over the course of the war there were more than 10,000 deaths from non-hostile causes. John Steinbeck’s estimate that as many as three out of four soldiers were on drugs now seemed conservative. Soldiers were smoking and doping not just in rear areas but on the front lines — while driving personnel carriers, firing weapons, or posted on sentry detail. One Air Force colonel, who was busted for holding pot parties in his private quarters with those under his command, said in his defense, “It allows me to understand my men and close the generation gap.”

I interviewed boys fresh from the Midwest who had never touched a drug; they would tell me that they had arrived “in-country” determined to be stoned every single day of their tour. At one point I invited two soldiers up to our apartment to demonstrate their field-tested manner of ingesting heroin: They would simply tap a little of the white powder into the end of their cigarettes and smoke it in front of their officers. They claimed to prefer heroin to marijuana, as joints were easy for officers to spot and even easier to smell.

Part of the bureau’s coverage of the army’s disintegration was a story we would file at the end of 1970. A stringer by the name of Rusty Brown had learned of an area near Saigon’s Tan Son Nhut Airbase called “Soul Alley,” just one mile from military headquarters and home to as many as 500 AWOLs. The mostly black residents survived on falsified documents, black-market trafficking, and currency manipulations. When the army finally took its revenge Brown and I filed this joint report: “Last Sunday morning, just after civilian curfew, a bizarre collection of 300 American MPs, Vietnamese MPs, and Vietnamese uniformed police descended on ‘Soul Alley’ with two helicopters armed with floodlights, two V-100 Commando armored vehicles with .50 caliber machine guns and 100 military trucks and Jeeps.” Soul Alley served as shelter for deserters during the war. Photo credit: Manhai / Flickr (CC BY 2.0)

The soldiers had sealed off the entire area and conducted a house-by-house search, as groggy GIs and hard-core deserters tumbled out of bed and tried to escape in every direction — their girlfriends, wives and prostitutes following in pursuit, some of them stark naked, many with only pajama bottoms on, running about in the glare of the spotlights. When the shakedown was over, the commando raid had netted 56 women and 110 GIs, including an estimated 30 deserters. It was the biggest operation the army had conducted in weeks.

The full extent of the unraveling of the U.S. military as an effective fighting force would not be brought home to me until the following spring. I had received a tip that an American firebase in Chu Lai had been completely overrun the previous night; I grabbed my camera  and notebook, caught a military cargo flight north, and then took a helicopter to the base. To my surprise I discovered I had the story to myself.

Before me were the smoldering embers left by the most destructive attack of the war upon a single American fixed position — Firebase Mary Ann. I interviewed survivors and reconstructed the event as best I could. My report ran with an internal byline and a photograph I had taken of a forlorn soldier with a shovel, surveying the blasted remains of his base:

Charlie Company, back from patrol, was ready to relax. The men filed out of the mess hall and into their bunkers, stripped to their shorts and flopped down on their cots. Some thumbed through comic books, some talked, and some, according to various reports, smoked a few joints. The guards were somewhat more alert — but not much. As the night wore on, some apparently nodded off over their M16s.

In the 13 months since Mary Ann had been bulldozed out of a 4,000 foot mountain top, it had taken very few mortars and had never even been probed on the ground. On the night of the attack, SP/4 Dennis Schulte recalled,“It was quiet, as always. I had seen nothing and expected nothing. I went over to the TOC (Tactical Operations Center) and talked with some friends until about 2:30 a.m. We talked about going home — as usual.”

Ten minutes later, after Schulte had drifted back to his bunker, the base exploded. Hundreds of mortar shells arced down out of the moonless sky with uncanny accuracy. Hunkered down in their bunkers, the GIs never even saw the 50 or so North Vietnamese sappers who slipped through the perimeter wire, wearing nothing but shorts, black grease and strings of rocket-propelled grenades (RPGs). One group wiped out the 155-mm howitzers, another tossed tear gas grenades and satchel charges into the TOC, killing or wounding virtually everyone inside. Methodically, the others went from bunker to bunker, blowing them with satchel charges, RPGs and, in some cases, home-made grenades fashioned from Coca-Cola cans. One GI stayed alive by playing dead; a sapper came up, removed the American’s wristwatch, and then went on his way.

By 4:30, when the first gunships and Medevac helicopters arrived, the entire base was in flames. “You couldn’t see because of the smoke,” said Lieut. Mat Noonan, a Medevac pilot. “We had to circle three times just to see where the pad was.” Noonan finally set down amidst “the worst carnage I have ever seen at an American installation. There were rows and rows of bodies — some burned to charcoal, others completely disemboweled. There were nine body bags full of bits and pieces of flesh.” Of the 231 Americans on the base, almost half were casualties, with 30 dead and 82 wounded. Officials suggested to me off the record that the real counts were higher. There were two extremely disturbing aspects to the story. The first was the fact that of the 28 South Vietnamese troops stationed at the base, only one was wounded. The Vietnamese section of the firebase was not hit that night either by mortar rounds or sappers, and none of the South Vietnamese troops had made any attempt to help the GIs during the attack. Circumstantial evidence pointing to an inside job was so overwhelming that the South Vietnamese command promptly launched an investigation to head off criticism.

The second disquieting fact was that the Americans had not put up their own spirited defense. The GIs did get off some rounds — 12 enemy bodies were found, including one stark naked sapper ensnared in the perimeter wire. But there should have been so many more. It proved to be one of the most upside-down “kill ratios” of the war. An officer in the Americal Division told me: “Somebody out there screwed up. The guards were asleep and the gunners never got their guns down into the final defensive position.”

The lax security at Firebase Mary Ann, not to mention many other American bases, had become an open secret — with gaping holes left in perimeter wire, defensive mines with defective detonators, and unguarded sentry posts. The sappers from the North merely had to page through Sun Tzu’s slim volume, The Art of War, to find this hoary axiom: “If the enemy leaves a door open, you must rush in.”