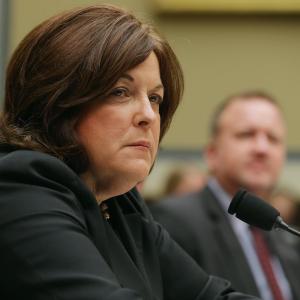 What You Missed About the Secret Service Director’s Resignation At first glance, it looks like Pierson was felled by the most basic rules of Official Washington: don’t make a bigger mess after you were hired to clean up another one. And don’t embarrass the boss, which in her case, can translate to putting his life at literal risk. Professional hara-kiri looks like the obvious choice.

But let’s back up a bit. In Pierson’s case, the disaster she inherited was a scandal over agents enjoying the services of Colombian hookers while preparing for a presidential visit to Cartagena in 2012.

Her predecessor, Mark Sullivan, was allowed to retire with his full 30 years of service despite the revelations of improper revelry. Unknown to the public then was that Sullivan had overseen an utterly bungled investigation into a shooting incident at the White House in 2011. It took the agency four days just to figure out that bullets had hit the presidential residence. Despite getting shouted at by First Lady Michelle Obama and scolded by the president, Sullivan left with accolades.

That kind of graceful exit is indicative of the special logic that seems to apply to the Secret Service, which does have one of the most challenging missions in the world.

Even so, big failures usually don’t attract the biggest punishments. In fact, they seem to attract rewards.

Consider this: James Joseph Rowley was in charge when John F. Kennedy was assassinated. He stayed in office for another decade. Rowley’s publicly promoted legacy is that he modernized the agency’s training and methods—after Kennedy’s death. The much-discredited Warren Commission recommended he be given that opportunity, and went easy on him for the staggering negligence and/or malfeasance seen in Dallas.

Rowley’s reward for the ultimate mission failure? The Secret Service emblazoned his name on its agent training center.

The career of H. Stuart Knight, in charge during the assassination attempt on Ronald Reagan, also survived that near-miss. Instead, it was an internal Treasury Department power struggle that brought him down more than a year later. Like Rowley, he too was credited with improving the agency’s training and methods.

So where, then, does that leave Pierson’s legacy?

She’s already made history by becoming the first woman to lead the Secret Service. She’ll also be remembered for being in charge when a knife-wielding intruder sprinted deep inside the White House, an incident that demonstrated frightening incompetence and inattention—at best.  Not to mention the incident in which an armed felon was allowed into an elevator with President Obama.

Predictably, there are two overarching arguments for why Pierson got the boot, each of which align with a partisan ideology. One says she was treated differently because she was a woman. The other argues that she was fired because she failed to do what she was supposed to do, and in part, bore the burden for the mistakes of her predecessors.

Indeed, there was bipartisan outrage at the fiascoes, and Pierson didn’t acquit herself well during a Congressional grilling.

Both sides agree that there is a great need for reform, and that’s what new acting Director Joe Clancy—who headed President Obama’s personal protective detail—is supposed to do.

It’s an interesting move by the president, because he recalled Clancy from the private sector. So Clancy ought to come without all of the political entanglements and divided loyalties a serving officer would have. And his hiring may show that President Obama understands the deep institutional constraints and risks he faces at the pinnacle of government power.

And then we must consider a big factor that’s often been ignored: the Secret Service, once embedded in the Treasury Department, has for the last 11 years been part of the overstuffed Department of Homeland Security. Agents say that’s subjected the Secret Service to the bureaucratic infighting, political meddling and inefficiency that characterizes DHS. Perhaps that’s why Pierson failed to make any real reforms.

But the Secret Service has needed real changes for more than a half-century. It rewarded one director who oversaw the ultimate failure of the agency’s mission: protecting the president’s life. And it has sent others who oversaw egregious episodes of ineptitude into comfortable retirements.

For that reason, Pierson’s legacy may become one of unintended reform: It’s the first time a Secret Service director has had to pay the real price of failure.