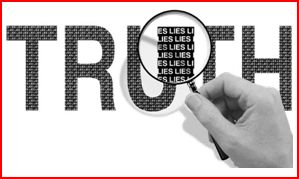 The Art and Science of Lies, Liars and Lying A selection of quotes on lying.  At WhoWhatWhy, a big part of our job is asking questions and, in response, we may get lies, half-truths, or misdirection. Lying has many different aspects. Sometimes it is an act of betrayal.  Or even an act of violence, in a way.  Or, it can be an act of kindness.  But probably more often than not, it is a cover-your-ass maneuver.  And, in politics, there is much ass to cover.  Here for your enjoyment are some of our favorite quotes about lies, lying, and liars:

Everything the State says is a lie, and everything it has it has stolen. (Friedrich Nietzsche)

Lying is done with words, and also with silence. (Adrienne Rich)

A half-truth is a whole lie. (Yiddish Proverb)

The best liar is he who makes the smallest amount of lying go the longest way. (Samuel Butler) “The real reason we have faces,” Margot Lassiter observes, “is to hold back what we’re thinking from the world.” (Eli Gottlieb)

A lie can travel half way around the world while the truth is putting on its shoes. (Mark Twain)

I would lie, of course. I lied a lot, and with good reason: to protect the truth—safeguard it like wearing fake gems to keep the real ones from getting stolen or cheapened by overuse. I guarded what truths I possessed because information was not a thing—it was colorless odorless shapeless and therefore indestructible. There was no way to retrieve or void it, no way to halt its proliferation. Telling someone a secret was like storing plutonium inside a sandwich bag; the information would inevitably outlive the friendship or love or trust in which you’d placed it. And then you would have given it away. (Jennifer Egan) People who are brutally honest get more satisfaction out of the brutality than out of the honesty.   (Richard J. Needham)

We need falsifications to make the past inhabitable. (Frans Kellendonk) When it comes to controlling human beings there is no better instrument than lies. Because, you see, humans live by beliefs. And beliefs can be manipulated. The power to manipulate beliefs is the only thing that counts. (Michael Ende) Whence arose all the horrid assassinations of whole nations of men, women, and infants, with which the Bible is filled; and the bloody persecutions, and tortures unto death and religious wars, that since that time have laid Europe in blood and ashes; whence arose they, but from this impious thing called revealed religion, and this monstrous belief that God has spoken to man? The lies of the Bible have been the cause of the one, and the lies of the Testament of the other. (Thomas Paine)