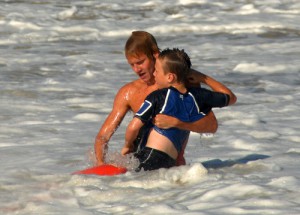 Recently, I spoke at a conference. Another speaker, a libertarian, whipped up the crowd with stories of government outrages. Government, he asserted in example after example, was the cause of most of our problems.

I know from experience covering ethnic wars in Yugoslavia and Central Africa the impact that emotion-driven anecdotes can have in leading people to broad and often unjustified conclusions that can trigger dangerous outcomes.

And in this case, some of the government excesses and outrages didn’t sound right to me.

One in particular intrigued me. He cited a case where lifeguards in Newport Beach, California, were being paid so much that some retired with pensions around $150,000 or higher. The speaker then mentioned that he’d sure like to be paid huge sums to sit around and ogle bathing beauties—a line that got big laughs.

But how true is this? And if true, how representative?

If you do a search on “lifeguard pensions,” you get a bunch of articles from the new “conservative media” that are becoming powerful players on the Internet. The top hit came from the site Calwatchdog.com and another from TownHall.com and from biggovernment.com. These, in turn, have created fodder for right-wing radio—and for public speakers like the fellow I heard.

CalWatchdog, one of a series of similarly named, conservative-funded entities scattered around the country that purport to represent a new kind of journalism, basically just took a piece from the Los Angeles Times and then used it to write an opinion piece that confirmed its readers’ biases without actually doing any kind of research or good thinking.

CalWatchdog’s masthead has three names, one of whom is the author of a book called “Plunder! How Public Employee Unions are Raiding Treasuries, Controlling Our Lives and Bankrupting the Nation.” A second was on the staff of Vice President Dan Quayle. The third, the one who wrote the lifeguard “piece,” is described as CalWatchdog’s “news reporter.”

She didn’t add much actual reporting to what the Los Angeles Times reported, but the ideological framing is typified by this lead:

With the recent discovery that many Southern California lifeguards receive the same fat pensions as other “public safety” officers and fire fighters, the public outcry at the absurdity is apparently paying off.

The justification for the “public safety” pension for lifeguards is that they perform an important job.

I was a lifeguard many years ago. It was a cool job and I was grateful for the slightly-better-than-minimum-wage pay I received.

But what few lifeguards will admit is that they are also glorified babysitters. Whether working at a swimming pool or a beach, lifeguards are often mediators and babysitters for inattentive parents.

And, Lifeguards save lives even less frequently than fire fighters rescue women and children from burning houses.

Then she describes lifeguards as “glorified babysitters” because they have to catch kids wandering into the surf when their parents aren’t looking. This is unworthy, unimportant work?

And—omigod—they actually save lives even less than firefighters, who according to her statement only rarely need to pull people from burning houses. Perhaps she’d prefer that the number of fatalities increase for both jobs?

Her article is really, really terrible. You need to read it for yourself to see how bad—juvenile, really—it is. If this is what “CalWatchdog” is going to do, well, the watchdogs certainly ought to earn a lot less than the lifeguards.

The article cites the following from the  LA Times:

“Municipal lifeguards start at around $60,000 a year, and pay escalates up to $115,000 at the supervisory level. Pensions are based, in part, on a lifeguard’s final salary. In Newport Beach, the pay is even better, with some senior supervisors earning $150,000 a year, including overtime,” The Los Angeles Times reported.

Let’s work this through. Should a municipal lifeguard, who is an adult, may be supporting a family, must be in peak physical shape, and able to brave dangerous conditions and perform heroic maneuvers, instead receive the minimum-wage-level pay the Watchdog “reporter” apparently received years ago?

Then, she snottily declares, “that about sums it up for lifeguard duties.”

The fellow I heard at my conference, also making hay out of this ridiculousness, makes his living giving speeches that persuade people that government is bad, period. He apparently earns a great deal. Is he so sure he is worth so much more than a lifeguard?

By the way, the Times article was just noting that a supervisor (presumably someone who hires, trains and monitors quite a few other lifeguards) can after many years top out his/her salary at $115,000. Is it crazy for someone who spends much of their life rising through any ranks to expect a decent compensation? Besides, as anyone who is familiar with affluent California beach communities like Newport Beach knows, $60,000 a year requires very careful living, and even the rare $150,000 (which importantly was probably only earned by one or two people who put in heavy overtime) hardly makes someone outrageously rich.

The speaker at my conference also made light of the claims of skin cancer risk for lifeguards who are out in the sun all the time.

This kind of contempt for people who work jobs that require commitment, concentration and good judgment is really beneath all of us. If it makes those who do everything they can not to pay taxes to feel better about their selfishness, so be it.

Let’s look at some statistics not reported by CalWatchdog. These are from the United States Lifesaving Association, based on numbers supplied by agencies. Last year, beach lifeguards rescued 56,799 people. There were 25 drownings at guarded locations.

By the way, CalWatchdog didn’t bother to provide a link to the original reporting in the Times (which itself wasn’t very good or deep and included plenty of lame lifeguard quotes), so we’ll provide it here.  One interesting stat, among those neither CalWatchdog nor the public speaker I heard  cited, is found in this Times paragraph:

San Diego offers an example of how lifeguard pensions gradually rose. In 1918, the city became the first in the state to hire full-time lifeguards to patrol its beaches after 13 people drowned in one day in riptides off Ocean Beach. The guards were initially part of the Police Department, and the chief lifeguard wore a police badge on his swimsuit.

So, let’s see. There were 13 people who died at a single San Diego beach on a single day back when there were no lifeguards, and 25 such deaths in the whole country in an entire year after there were.

Ha ha! Funny stuff, watchdogs. (By the way, those of you who are trivializing lifeguards—keep an extra close eye on your kids, because if you have your way, you’ll be on your own.)