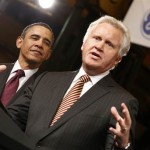 On Qaddafi, we already knew he was a bad guy. But now we find out what he’s been up to that really distresses business leaders. The very same business leaders who profoundly influence the American political process and the foreign policy decisions this country makes. According to a report in the New York Times,

…The episode and others like it, the officials said, reflect a Libyan culture rife with corruption, kickbacks, strong-arm tactics and political patronage since the United States reopened trade with Colonel Qaddafi’s government in 2004. As American and international oil companies, telecommunications firms and contractors moved into the Libyan market, they discovered that Colonel Qaddafi or his loyalists often sought to extract millions of dollars in “signing bonuses” and “consultancy contracts” — or insisted that the strongman’s sons get a piece of the action through shotgun partnerships.

Who wants to pay such bribes? Get rid of the guy.

Now, let’s turn to Immelt. First, you need to know that he’s a darling of the political and media establishment. The president is extremely high on him. President Obama has chosen Immelt for a super-crucial position for him and his re-election fundraising apparatus, as the White House’s “business community liaison.” That’s shorthand for the kind of people who intercede with big companies that might or might not help fund the campaign. A bit like those Qaddafi “signing bonuses” cited above.

Even more importantly, Obama has named him chairman of the President’s Council on Jobs and Competitiveness.  Keep this in mind when you consider the following….

How is Immelt helping this country out? For one thing, he is a king of the job exporters, a pillar of the Indian economy. But that’s not all. As the New York Times noted the other day, Immelt’s company pays no U.S. taxes. That’s right. No taxes.

General Electric, the nation’s largest corporation, had a very good year in 2010.

The company reported worldwide profits of $14.2 billion, and said $5.1 billion of the total came from its operations in the United States.

Its American tax bill? None. In fact, G.E. claimed a tax benefit of $3.2 billion.

That may be hard to fathom for the millions of American business owners and households now preparing their own returns, but low taxes are nothing new for G.E. The company has been cutting the percentage of its American profits paid to the Internal Revenue Service for years, resulting in a far lower rate than at most multinational companies.

Its extraordinary success is based on an aggressive strategy that mixes fierce lobbying for tax breaks and innovative accounting that enables it to concentrate its profits offshore. G.E.’s giant tax department, led by a bow-tied former Treasury official named John Samuels, is often referred to as the world’s best tax law firm. Indeed, the company’s slogan “Imagination at Work” fits this department well. The team includes former officials not just from the Treasury, but also from the I.R.S. and virtually all the tax-writing committees in Congress.

Immelt’s got the situation wired from top to bottom, all of his options hedged. That’s why he’s a “good guy”, unlike Qaddafi, whose brutality was never enough of a problem until he began shaking down American and other oil companies.

Why is Immelt Obama’s guy? Good question. He was a political donor to George W. Bush. In July, 2004, during Bush’s re-election campaign, Immelt was quoted by the Bush campaign saying that “this is the best economy we’ve seen in years.”

Then he started getting the group hug from the Dems and the liberal media. Pretty soon, the hagiographies were pouring out. In 2005, Bill Clinton rolled out his “Clinton Global Initiative,” with Immelt as one of the attending big names. In February, 2006, while touting his book “Take It Back: Our Party, Our Country, Our Future” on Meet the Press, former Clinton operative Paul Begala described Immelt as  “the greenest guy…that is to say, environmentally correct and profit-making.”

Here’s Immelt on Charlie Rose in 2007: [Bold added for emphasis]

CHARLIE ROSE: … you know all these candidates. Are they talking about it? Are they aware of it? Is it part of their conscious as they think about leading this country?

JEFFREY IMMELT: I think in varying degrees, it is. You know, I think Senator Clinton understands it. I`ve talked to her. I think Governor Romney clearly gets it.

JEFFREY IMMELT: I think Rudy has always gotten it. I think he`s been able to do that. But it`s.

CHARLIE ROSE: Senator Obama get it?

JEFFREY IMMELT: I think they all do. But.

CHARLIE ROSE: They get the idea that the U.S. has to be competitive around the world?

CHARLIE ROSE: Not only competitive, though, in terms of..

CHARLIE ROSE: Hard work, yes. And also competitive — where do you think we have to be competitive in terms of values and what we stand for and who we are? Or does that matter?

There you have it. Values count.

And politicians can count, too. Somehow, guys like Immelt count for more than millions of us. Strange, strange math in this country.