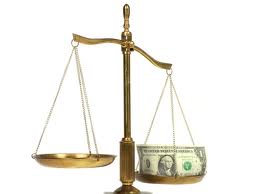 Only infrequently does the New York Times really go for the jugular and spell out for us the extent to which the system is rigged against ordinary people and their interests. One such rare example is a recent article by the Times’ thoughtful legal writer, Adam Liptak, based on new academic research out of Chicago.

Almost 40 years ago, a Virginia lawyer named Lewis F. Powell Jr. warned that the nation’s free enterprise system was under attack. He urged the U.S. Chamber of Commerce to assemble “a highly competent staff of lawyers” and retain outside counsel “of national standing and reputation” to appear before the Supreme Court and advance the interests of American business.

“Under our constitutional system, especially with an activist-minded Supreme Court,” he wrote, “the judiciary may be the most important instrument for social, economic and political change.”

Mr. Powell, who joined the Supreme Court a year later in 1972 and died in 1998, got his wish – and never more so than with the court led by Chief Justice John G. Roberts Jr.

The chamber now files briefs in most major business cases. The side it supported in the last term won 13 of 16 cases. Six of those were decided with a majority vote of five justices, and five of those decisions favored the chamber’s side. One of them was Citizens United, in which the chamber successfully urged the court to guarantee what it called “free corporate speech” by lifting restrictions on campaign spending….

In other words, an ideologue favoring corporate America got himself appointed to the highest court in the land, and his legacy is that the court has become so pro-business that it is willing to turn over not just the judiciary, but all branches of government, to those with the most money.

If we don’t do a better job of getting the people to focus on this tragic and deeply corrupt march toward a corporatist America—and soon—we may as well start practicing our Mussolini salutes.