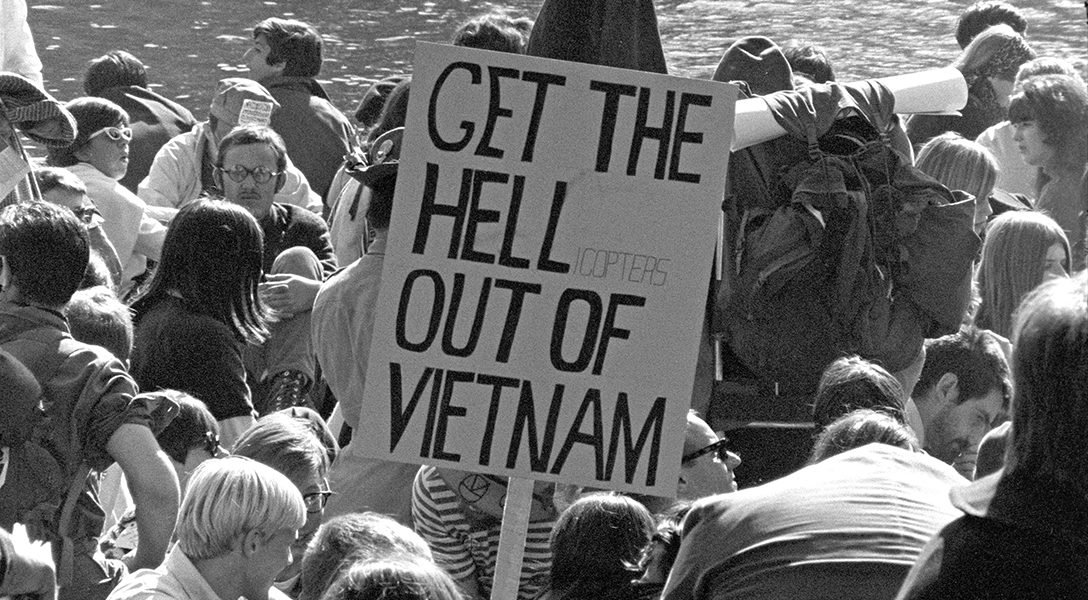 What We Still Haven’t Learned from the Vietnam War

Fifty years ago today, in 1967, nearly 100,000 Americans marched on Washington, DC, to protest the Vietnam War. In those days there was a mandatory draft in place, and the risk was very real that a young man just out of high school could quickly wind up 13,000 miles away, fighting an unseen enemy in jungles that didn’t need tanks or B-52 bombers to inflict fear. Worse yet was the possibility of going MIA or coming home in a body bag — just another expendable statistic in the great fight against communism. But even many of those who made it back left part of their souls in that war zone.

Today there is no longer a mandatory draft. And neither is there any anti-war movement to speak of.

If you ask young people today why the United States joined the fight in WWII, many could probably tell you that we were bombed by the Japanese at Pearl Harbor. Or perhaps they would say we had to fight Hitler and the Nazis. But what about Vietnam? Why did we go to war there? What were we fighting for? How did we become involved in that conflict? My guess is that most couldn’t tell you — just as it became unclear to that generation in 1967, who were fighting and dying.

This contrast between clarity and ambiguity is reflected in popular cinema — take WWII films like Saving Private Ryan, Band of Brothers, Pearl Harbor, and Sands of Iwo Jima that reflect the essential righteousness of the American cause. Yet classic Vietnam War films like Apocalypse Now, Full Metal Jacket, Platoon, and Hamburger Hill reflect the uncertainty, misery, barbarity, and psychosis of the GI experience.

But this split perception took time. The truth is that the US had been in Vietnam since the mid-1950s. Since the turn of the century, America had been slowly developing into an imperial power to rival the British and the French. WWII had solidified it as the inheritor of the British Empire — the only imperial power left standing.

The whole of Vietnam had been a colony of the French since the 1890s, but after WWII an uprising occurred, led by Ho Chi Minh — inspired by Marxist-Leninism and a nationalist fervor to regain control of their own country. By 1954 the French were out, and two Vietnams, north and south, formed in an uneasy proximity.

The US inherited the imperial project from the French — gradually sending in military “advisers” to the south. President John F. Kennedy had continued that project by backing the south Vietnamese government with military assistance and equipment. The stated reason for this intervention was to prevent the spread of communism throughout southeast Asia — the infamous “domino theory.”

But by 1963, Kennedy had come to see the futility of this endeavor. He gave orders to begin withdrawing troops, and planned to have all military personnel out of Vietnam by the end of 1965.

But on November 22, 1963 President Kennedy was assassinated, and President Lyndon B. Johnson took the helm. He immediately reversed Kennedy’s orders. The Gulf of Tonkin incident in August 1964, in which a group of North Vietnamese torpedo boats allegedly fired on a US Navy ship (it turned out to be false — and the administration knew it), gave Congress the incentive to give Johnson the authority he needed to dramatically escalate troop deployment and to begin a new bombing campaign.

In the mid-60s, young people began questioning why their friends and family members were being sent thousands of miles away to fight in another country they’d never heard of before. The rock n’ roll revolution was in full swing, and the hippie movement, dope, and acid were fueling a counterculture movement that questioned the establishment and their rules of conformity — instead pushing the mantra “make love, not war.”

Not only was Johnson feeling the heat from student protesters, but even Wall Street and Big Finance were beginning to express doubts about the feasibility of winning the war. The debt was piling up and America was at that point still under the Bretton-Woods gold standard.

In March of 1968, less than a year after the protest march on D.C., Johnson announced he would not seek reelection.

Senator Robert Kennedy, brother of JFK, had thrown his hat in the race, running as a peace candidate who would bring the troops home from Vietnam. He was assassinated several months after Martin Luther King, Jr. The Republican candidate Richard Nixon won the election, and the war continued another seven years, taking us off the gold standard in the process. It ended in US defeat in 1975, shortly after Nixon resigned from office in shame after the Watergate scandal.

By the war’s end the US had lost 58,000 troops — the Vietnamese somewhere between one and three million.

So why was America in the Vietnam War for so long? What was it really about?

We might as well ask why we have been in Afghanistan for 16 years with no end in sight. Or why did we invade Iraq? Why did we overthrow Libya? Why are we involved in a civil war in Syria? Why are we backing a genocidal war in Yemen? Why did we invade Grenada? Why did we conduct covert warfare in a dozen different Central and South American countries over the past 60 years? Why are we still in Korea 70 years after the fact, now on the verge of a renewed conflict? Why have we come to the very threshold of nuclear annihilation more than once?

What happened to the citizens, community leaders, institutions, and politicians that we would allow this endless warfare to continue? And where is the anti-war movement? Why are they MIA?

These questions are all related. Perhaps if we were to solve the riddle of Vietnam, we would solve these other questions as well. Perhaps those 100,000 students and protesters 50 years ago solved it — and decided to do something about it. Maybe we can too.