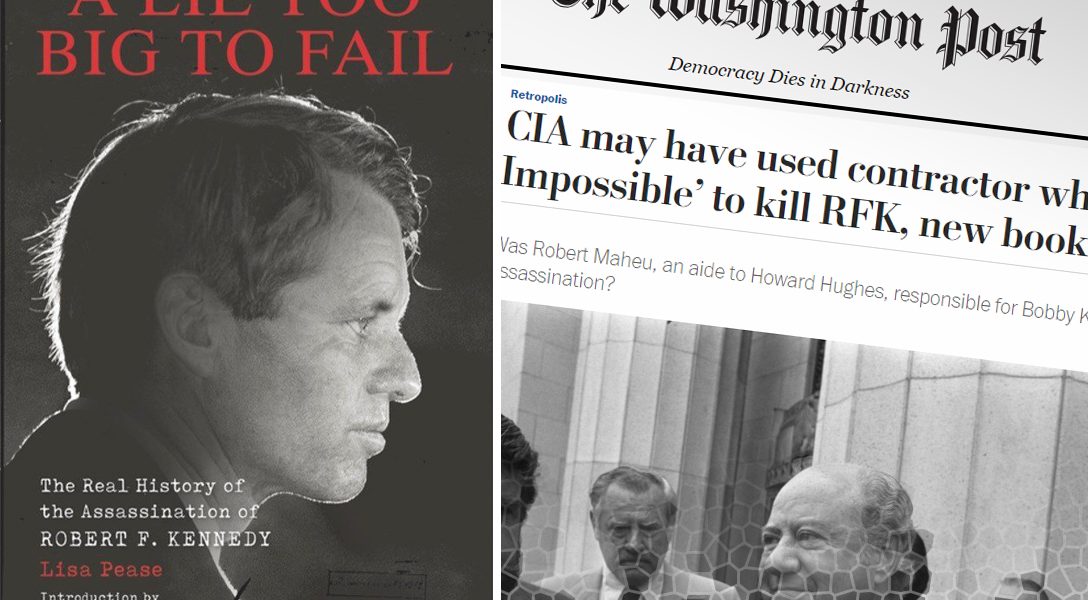 Saturday was a turning point in American history.

For perhaps the first time ever, one of the biggest legacy news organizations published a fair, fact-based article about a political assassination without dismissing, out of hand, any evidence of conspiracy.

The article, about a new book on the assassination of Robert F. Kennedy and the possible role played by elements of the national security establishment, likely would not have appeared in the New York Times, the Los Angeles Times, the New Yorker, or on NPR, PBS, CBS, NBC, and the like.

And yet here it is in the Washington Post.

This article would also likely never have appeared in the Post in the decades prior to Jeff Bezos’s taking over ownership. Say what you will about Bezos — and there’s plenty to say — he seems to be ushering in a new era of journalistic candor.

For many years, the Washington Post, like the Times and so many other news outlets, was a witting or unwitting participant in the CIA’s Operation Mockingbird, a program to shape public opinion by planting disinformation in the media.

One thing the national security establishment didn’t want was journalists taking a good look under the hood of our power hierarchy, or asking questions about the military-security-industrial complex that former presidents Eisenhower, Truman, and others warned against.

The powers-that-be certainly didn’t want the public knowing that US government agencies went around the world foiling democracy — including, on occasion, killing or sanctioning the killing of elected officials in other countries. (To see just a few of our eye-opening stories on this subject, please go here, here, and here.)

And they most certainly didn’t want anyone looking into whether such behavior might ever take place on domestic soil — exactly where the stakes were the highest.

The CIA put out a memo in 1967 advising that the way to handle unwelcome inquiries and reports on the assassination of John F. Kennedy was to ridicule the messenger. Thus, the terms “conspiracy theory,” “conspiracy theorist,” and the like. If you google those terms, you find them in common parlance now, more than half a century later.

Journalists at corporate outlets usually snark at anyone who does not accept the verdict of government “fact-finding” bodies like the Warren Commission, which typically are populated by people who have things to hide or bosses who want them hidden.

Writers and scholars doing serious research into serious topics get lumped in with outliers who believe that aliens from outer space are walking among us or that the moon landing was faked. And serious researchers are “analyzed” by psychologists trying to “explain” what’s wrong with people who just can’t accept official explanations. (Please see, for example, our story, New York Times Warning: Trust Authorities on Boston Bombing, or You’re Nuts.)

Yes, America, there are real conspiracies — the courtrooms of the land are full of conspiracy cases right now — and there’s nothing wrong with a theory that tries to explain them.

In my book Family of Secrets and the news website WhoWhatWhy — which I founded as an outgrowth of the inquiries that led to my book — I began exploring some of these topics. And, as I dug into historical events (often related to the Bush family and their network) that traumatized the country and seemingly reordered the power structure itself, I was repeatedly counseled to stay away from such material. Not because my suspicions were off base, but because my inquiries would automatically be disparaged, and everything I did and said would be dismissed.

That’s how bad things were — and mostly still are.

Yet this article in the Washington Post could be the beginning of a new era. For when major establishment brands are no longer afraid of the truth, then anything is possible.

Larry Payne’s comment is insightful, but even if his analysis is perfectly correct. It means that the call for new investigations into assassinations are having an effect…

One of Ladybird Johnson’s home movies on Youtube reveals an interesting fact. Ladybird, while showing the dining room at the Johnson ranch, mentioned foreign leaders who had dined there.
One of the guests mentioned by Ladybird was Israeli prime minister Eshkol. How many know that JFK wrote a letter to Eshkol a few months before his assassination demanding inspections of Israel’s nuclear facilities? Once LBJ was in power, Israel was never again confronted about their illegal nuclear weapons program.

A “new era of journalistic candor” from Jeff Bezos?
Sorry, I can’t buy that idea. It has been reported that Bezos signed a $600 million contract with the CIA to build an internet cloud for them.
I suspect the article is a “limited hangout” piece created by the CIA to counter RFK, Jr’s
investigation into his father’s murder. Maheu may have been involved, but the orders most likely came from the one person who benefited most from JFK and RFK’s deaths.
Surely I don’t have to tell you who that was.

Well, Russ, that is a pretty dramatic lede for a Post story that while going further than any other mainstream outlet ever dares to go in plowing into our government conspiracy history, the headline writer found it more meaningful for readers to hook the investigative piece on an old TV show reference.

And maybe the headline writer got it right in aptly linking Maheu’s alleged involvement in the RFK assassination and his connection to creation of the old Mission Impossible television show, at least in terms of how the paper wants us to look at that story from an entertainment rather than an investigative news perspective.

So, given that, I’d like to see more evidence of tide-turning reporting and more favorable Kennedy book review coverage, with emphasis on serious credibility, before we call something a new phenomenon worth celebrating.

Not to say I want to downplay your optimistic outlook, because like you I want to feel any chink in the shield of blocked coverage, represents certain progress going forward.

Especially now, with a new Congress filled with fresh political leadership in the House bent on greater truth in oversight, we can only hope a more independent press will emerge from the grip of the military security complex on our state of affairs so we can finally unburden ourselves with gnawing truth behind the lying legacy of four essential American leaders murdered to alter war and social policy in one of the most traumatic five-year crossroad periods in our history.

Thanks Russ. An important book and history and now coverage.