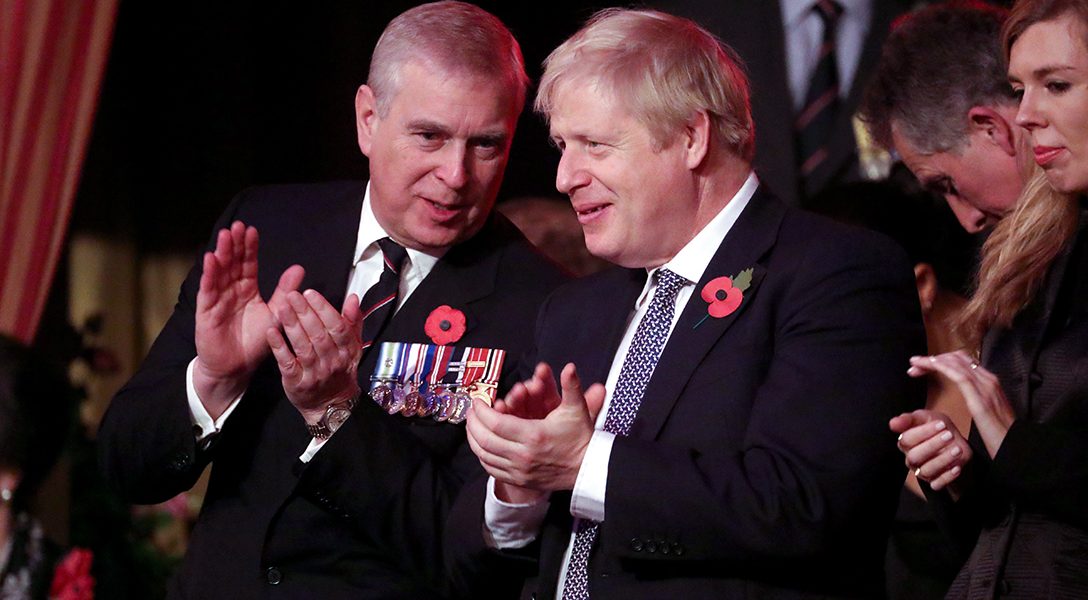 LONDON — “That woman” is how the Queen’s mother is reputed to have always referred to the racy American divorcee Wallis Simpson, who stole the heart of a king and triggered the British constitutional crisis that ended the reign of Edward VIII in 1936.

How the current monarch views the Jeffrey Epstein sex trafficking victim Virginia Roberts (now Virginia Giuffre) — who claims that, as a 17-year-old, she was forced to have sex with Prince Andrew, the Queen’s second (and reputedly favorite) son — is not known. But the allegations, which the prince strongly denies, have fomented the worst crisis for the royal family since Princess Diana went on record in 1995 about her dysfunctional marriage to Prince Charles, the heir to the throne.

In return, Epstein spent weekends at the royal homes of Windsor Castle, Balmoral in Scotland, and the country estate at Sandringham. Prince Andrew’s defense is that Epstein was just baggage attached to his university friend Ghislaine Maxwell, daughter of the disgraced press magnate Robert Maxwell. She is also alleged to be the she-pimp who fed Epstein’s worst desires.

With Epstein now dead after a contested suicide in a Manhattan jail cell, the prince moved to, so to speak, “put to bed” the debauched allegations and rumors swirling around his relationship with Epstein. His PR gambit was to give an hour-long interview with the BBC, aimed at exonerating himself. It failed spectacularly. The implausible prince was reduced to a knave.

Even the UK’s royal-obsessed tabloid press was unforgiving. His attempt to explain why he spent four nights at Epstein’s New York mansion — the scene of many of the financier’s most debauched sexual abuses — after the latter had been convicted of procuring an underage prostitute, was ridiculed.

“On the date that’s being suggested I was at home with the children… I’d taken Beatrice to Pizza Express in Woking.”

Prince Andrew tells @maitlis he was elsewhere the night it has been claimed he had his photo taken with a woman who says they had sex
#Newsnight pic.twitter.com/XoDEALx5MJ

His claims that, on the first night that Roberts alleges she was served up to the prince, he was attending a children’s party at a humble pizzeria on the outskirts of London became a national joke and the de rigueur social media meme.

But the guillotine of public opinion really came crashing down on the prince’s neck as he revealed himself to be an empathy-free zone. Amid the hour-long royal arse-covering exercise there was not a word of compassion for Roberts or any of Epstein’s victims.

It didn’t take long for the repercussions of the car-crash interview to be felt at Buckingham Palace. Companies attached to his youth business program, pitch@palace, withdrew support and he fired himself from universities and charities which had bestowed various honorary titles upon him, JUST before they pressed the eject button.

By the end of the week, he was the pariah prince and announced he was retiring from public life, albeit pursued by American lawyers for Epstein’s victims demanding he give a statement under oath about what he knew of the grotesque world that he had, at least, blithely fellow-traveled in.

“Prince Andrew has been de-royaled, if there is such a word,” the historian and biographer Robert Lacey, an adviser to the acclaimed Netflix series The Crown, told the Guardian. “At the risk of sounding melodramatic, I really would compare it to 1936 and the abdication of Edward VIII. What we are talking about is effectively the removal of a member of the royal family as a result of public opinion.”

Indeed, the deepening crisis surrounding Prince Andrew is set to intensify after the announcement that a BBC interview with Roberts will air next week.

Unlike Roberts, who has bravely fought against powerful forces for justice for herself and countless other women who were snared in Epstein’s nightmare world of wealth and sexual slavery, US businesswoman Jennifer Arcuri was never a victim. But, like Roberts, she is an American woman who has shaken the British establishment in a torrid tale of sex and power.

The Epstein Story Is Not About Celebrities and Shiny Objects

Arcuri, all blonde Southern Californian ambition, rocked up in London at the beginning of the decade looking for a hustle. The former model found it in the form of Boris Johnson, now the British prime minister. Then he was the Mayor of London, and eyebrows were raised when he kept rushing to help promote a couple of little-known, short-lived tech startups that were founded by Arcuri.

Surprisingly generous support was made available by the mayor’s promotional agency London & Partners, which provided thousands of pounds in corporate sponsorship. She was also given a sought-after place on three trade missions with the mayor after intervention from Johnson’s office.

Johnson — who is infamous for being unable to keep his “johnson” tethered (his Wikipedia biographical summary reports, “Children: 5 or 6”) — and Arcuri were, without doubt, firm “friends” to a point, and that point was when details of their friendship re-emerged after he became prime minister in July.

At first, Arcuri sought to keep the PM’s secrets by explaining that his regular visits to her east London apartment, which included a pole dancing pole, were for “technology lessons” — cue bout of national sniggering.

But Arcuri was to prove hell hath no fury like an (American) woman scorned. In an interview on ITV, Arcuri claimed Johnson had ghosted her. Bizarrely, when she tried to call him two months ago, an aide impersonating a Chinese person answered. Then when the prime minister did answer, he slammed down the phone.

No simpering English rose, Arcuri dashed off a deference-free text.

“Is this the price of loyalty? To be hung up on, ignored and blocked? Why would I remain silent if you can’t even speak to me?”

Boris Johnson cast me aside as if I were a gremlin, Jennifer Arcuri tells ITV's Exposure in interview to be broadcast on Sunday https://t.co/0GzCM2lLbj pic.twitter.com/jOSs9ONBEx

And bless her Yankee moxie, she hasn’t. Asked during ITV’s Sunday night interview what she would say to Johnson, she stared directly into the camera and stated:

You know that I’ve been nothing but loyal, faithful, supportive and a true confidante of yours. I have kept your secrets and I have been your friend, and I don’t understand why you’ve blocked me and ignored me as if I were some fleeting one-night stand, some girl that you picked up at a bar, because I wasn’t. And you know that. And I’m terribly heartbroken by the way that you have cast me aside like some gremlin.

When Johnson is quizzed about Arcuri, his eyes narrow, his body stiffens, and he mumbles something about “no impropriety” and tangents back to “getting Brexit done” as soon as possible.

But there is a sense that Arcuri may not go away, that she has much more to say — and that could mean trouble for the prime minister as he fights a snap general election.

However, if one American import is set to rain on Johnson’s parade, a great orange cloud drifting in from the west could be his savior.