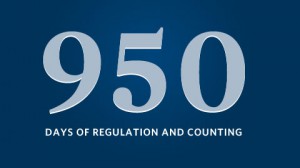 Romney vs. Obama on Regulation and Big Money Now, if like me, you are wondering: what causes this? And what’s specifically so attractive about Romney compared to Obama, and how, practically speaking, is one of these centrists more attractive to certain donors than the other? One answer can be found in this headline:

According to the article, the objective of these steps from Obama’s new Consumer Financial Protection Bureau is “to bolster fairness and clarity in residential lending, including requiring a good-faith estimate of costs for homebuyers. The proposed rules have two central elements — the loan estimate and the closing disclosure — that would provide would-be homebuyers with a simple accounting of likely payments and fees to prevent costly surprises.”

Now, who could be against truth and openness? Actually, a lot of people. First of all, the lenders themselves—and they’re a giant and highly profitable industry—benefit when the public does not fully understand how a loan will affect them. The less we know, the worse decisions we make, and the better they do. If you don’t think that’s the case, then you have never accidentally incurred a late charge or seen your interest rate suddenly leap.

Second of all, there are the people (you know who you are) who are so sclerotically angry at the very idea of government that any kind of government activity—even of this sort, that really does benefit the average person—is seen as more unwelcome intrusion.

Those of us who benefit from the new disclosure rules, by and large, are people without a lot of money. We’re people who can’t afford to hire lawyers to sort out the fine print, and we’re usually the ones who get the worst deals. We can’t and generally don’t donate to candidates.

Romney consistently criticizes regulatory moves that the Obama administration makes, so when it comes to the cash sweepstakes, he’s the winner.

As much as Romney and Obama are similar on so many of the biggest issues, it’s usually in matters like this—that represent at least a partial amelioration of the way that the powerful can and do repeatedly hoodwink the rest of us—where we can see a difference.

Even those who make loans will, in private, admit as much.

But don’t look to Obama to go too far. Here’s an example: His administration has come up with measures, designed to prevent another financial crisis, that place controls on risky derivatives trading. However, by the time the Commodity Futures Trading Commission worked out its final rules, a number of significant exemptions had been built in.

The bottom line is that there really is a substantive difference between the two candidates—only it’s much, much smaller than one might hope for in a truly competitive, vibrant democracy.

Those differences don’t seem like much to most of us, but they do to the folks with the big bucks. While many of the biggest firms hedge their bets, and give heavily to both men, enough of the wealthiest will give only to Romney to put him well ahead. And when you take into account the unlimited spending of SuperPACS and the new breed of nonprofit outfits that don’t have to name their donors, the difference can be decisive.

You don’t have to be a partisan to recognize the point. And that’s at least one of the reasons Romney can outraise Obama. And with all the extra cash, he can run lots of ads about how, when he beats Obama, he will eliminate “unnecessary regulation.” As for the president, he has to hope that he has enough money to tell people how and why the relatively tame sort of regulation he proposes actually benefits them.