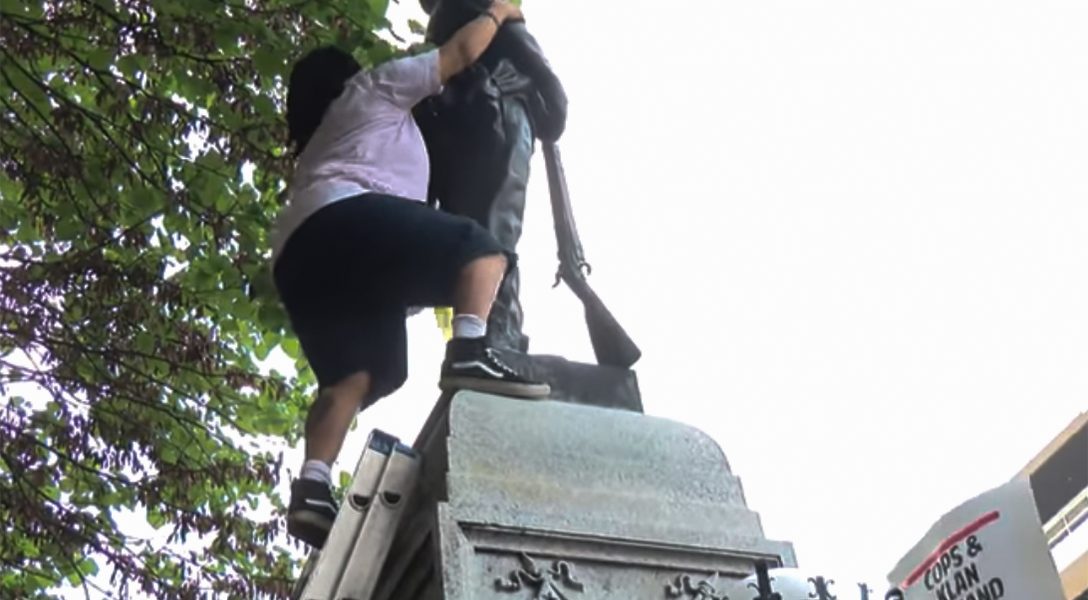 What Really Happened in Durham, NC? A Nasty Thought

On August 14, in Durham NC, something strange happened that does not make sense to me.

A protester climbed up on the statue of a Confederate soldier, tied a rope around his neck, gave a signal, and her fellow activists pulled until the statue came crashing down. Then several others converged on the statue, viciously, exuberantly, kicking it again and again.

This was done under the watchful eyes of law enforcement — who were filming every moment of the incident. As Fox News reported, “At no time did officers with the Durham Police Department or deputies with the Durham County Sheriff’s Office intervene… according to multiple media reports.”

At first I thought, how nice. The police are allowing the crowd to let off steam.  After what happened in Charlottesville, the participants needed a catharsis, and this one seemed harmless enough, especially since such statues will probably be brought down anyway. So the police seemed to be indulging them.

And yesterday morning, Durham County Sheriff Mike Andrews seemed to confirm this impression. He said “Collectively, we decided that restraint and public safety would be our priority.”

When police are said to have used restraint, it suggests they restrained themselves from using excessive force. But in this case, it seems the police weren’t using any force at all.

Could the crowd have assumed this non-reaction amounted to tacit permission?

The Durham Police Department said later that they monitored the protests, but made no arrests because it is the county Sheriff’s Office that has jurisdiction over county landmarks. Then the sheriff went on to say something I found chilling:

“With the help of video captured at the scene, my investigators are working to identify those responsible for the removal and vandalism of the statue.”

But had the police called to the woman as she began her climb up the statue and ordered her to get down, the whole incident could likely have been prevented.

Now I wondered whether this was a trap. Encourage them to misbehave, get it on film, then make arrests.

But what would be the motive? Hatred on the part of southern white police officers for those they perceive as lefties? Not impossible. After all, North Carolina is ranked 11th in the nation in number of hate groups.

Then a nasty idea crawled into my mind. It’s probably nonsense, but it won’t go away: Is it possible that a few good ‘ol boys in key law enforcement positions have been quietly instructed to give Donald Trump a hand — and gather visual evidence suggesting such demonstrators are as violent as he claims? (The beat cops on stand-by would not necessarily be told why.)

Trump has been saying that films prove both sides are to blame for the tragedy in Charlottesville, but he’s been having a hard time selling that idea. Could this be what’s behind the “restraint?”

Perhaps not. One can think of a range of explanations, some more benign.

But we live in dangerous times —  and a little proactive consideration of worst-case scenarios seems advisable. To see a few such examples, please go here, here, here, here, and here.