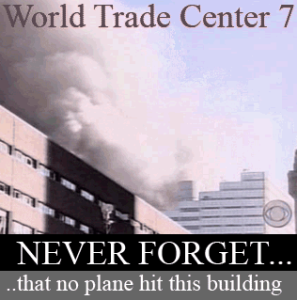 Putting a 9/11 Mystery on the Ballot I was standing blocks from Building 7 of the World Trade Center complex and staring directly at it when it collapsed.

Working for the Los Angeles Times, I arrived that morning just in time to see an enormous cloud of dust and people running away. I had not yet known of the rapid and deadly descent of the South and North towers. That afternoon, I called in a series of reports to a staffer in the New York bureau.

I was literally on the phone with the office at 5:21 p.m., describing the fires burning in the structure as the building began—and completed— its remarkably fast, smooth descent to the ground. I described the building neatly pancaking, and the Pulitzer Prize winner on the other end taking my dictation declared: “That sounds like a controlled demolition.” In fact, I have seen controlled demolitions before and since—and indeed, that was exactly what the destruction of Building 7 looked like, except perhaps for a marginally slower collapse of the top portion

As with most people, I was baffled by how Building 7—a smaller, 47-story tower that had not been hit by a plane and was separated from the Twin Towers by low-rise buildings–would come down at all. It just made no sense.

How exactly the building did come down has never been properly explained. An investigation by the National Institute of Standards and Technology concluded that the building was hit by debris from the collapsing North Tower that started fires. However, it ruled out diesel fuel, structural damage from the debris and structural elements (trusses, girders, and cantilever overhangs) as causes of the collapse. It said the lack of water to the sprinkler system was an important factor in allowing fires to rage all afternoon. But the panel declined to state how the fires could bring down the building—and in such a rapid manner.

For many years, those who have been troubled by things that did not make sense regarding the 9/11 attacks have been marginalized as kooks. To be sure, some entertain enormously elaborate, complex scenarios that assume unspeakable evil carried out by a bewildering number of individuals, nations, and institutions.

However, fair-minded people who have carefully studied the evidence are troubled by the “official story,” just as they are troubled by the official explanations of the assassinations of American leaders over half a century, and other traumas ranging from the Oklahoma City bombing to the Boston Marathon bombing.

There is a reason so many people don’t trust the security apparatus and its allies in government, academia and the media, or the reassuring stories they tell us time after time that “there’s nothing to see here, folks.”Or to allow even the most reasonable question into the public discourse.

That kind of question hasn’t been possible with the mystery of Building 7. Until now.

A small group, NYC Coalition for Accountability Now (NYC CAN), run and largely staffed by a young man named Ted Walter, has come up with a solution: Get the public to legislate a formal inquiry into building collapses.

Noting that no high-rise building has ever collapsed as a result of fire, and seizing on the official position that the destruction of Building 7 cannot be definitively explained, Walter’s group has proposed that the city explore all building collapses since and including 9/11. The proposed inquiry pointedly excludes Buildings 1 and 2, the collapses of which have been much investigated and debated. It does not explicitly mention Building 7—but then it does not have to. Building 7 is unique in that it was not hit by a plane. Any serious investigation of building collapses would start with Building 7.

The mechanism for this is to seek to have New Yorkers vote on a ballot measure, the High-Rise Safety Initiative. Its supporters face a tough challenge ahead, and have already hit some formidable road blocks. Still they persevere.

Not Your Run-of-the-Mill “Kooks”

Ted Walter does not fit the caricature of the unshaven, grumpy, shouting activist. He’s a calm, thoughtful, precise fellow. He grew up in Wisconsin and Mozambique, where his father was an official of a private aid group, got a BA at New York University and a Masters in Public Policy at UC Berkeley, and then worked for San Francisco’s Board of Supervisors.

He’d arrived in New York from Mozambique at age 19 to attend college two weeks before the attacks. “9/11 was essentially my introduction to New York,” he says.

The first thing that struck him was to wonder why, so long after the first planes hit the World Trade Center, another plane was unimpeded in hitting the Pentagon. Where were the U.S.’s vaunted defenses?

He also found it odd that a building collapse would involve entire structures virtually vaporizing in the air.

It was not until the spring of 2006 that Walter began determinedly researching the events. “During the course of a couple months of reading everything I could find, I came to the conclusion that the official account of 9/11 was false,” he says.

In 2008, others launched something called the NYC 9/11 Ballot Initiative. Walter volunteered as a petitioner, then managed paid canvassers. The next year, he founded a group, NYC CAN, along with some family members of 9/11 victims, and assumed control of the ballot initiative. Although they submitted 80,000 signatures, more than the required number, the city successfully challenged the initiative in court and kept it off the ballot.

This was hardly surprising. In certain parts of the country, especially in many Western states and municipalities, major policy is often legislated directly at the polls. Not so in New York City, which has long made it virtually impossible to qualify such a measure for the ballot. In fact, New York City voters have only seen two of them in half a century. Nonetheless, in the spring of 2013, Walter and his group talked with a top New York City election attorney, decided there might be a chance at prevailing despite the long odds, and began moving forward with another attempt. It became the High-Rise Safety Initiative.

As anticipated, the City challenged the petition—claiming that not enough signatures are valid, and that the petition language is not legally valid. Walter and company filed suit against the City to have that determination annulled, and were due to go into court on Aug. 14.

The group believes that it has overcome the usual issue of invalid signatures by filing so many—and because even in its 2009 effort, it was able to prove that enough signatures did pass muster. Now, it must pass the arcane statutory hurdles the city created exactly to prevent such measures. Walter thinks they have a chance.

The case should be decided by mid-September. If the initiative is successful, it will be on the November ballot.

The mayor, a liberal named Bill DeBlasio, has not had kind things to say about the effort—presumably not unlike what his predecessors, Michael Bloomberg and Rudy Giuliani, might have had to say. As reported by Crain’s New York Business:

“From what I’ve heard it’s absolutely ridiculous,” a peeved Mr. de Blasio said in response to a reporter’s question. “And it’s inappropriate, after all the suffering that went on 9/11 and since. It seems to be this is a very insensitive and inappropriate action.”

Crain’s itself couldn’t help referring to the group as “conspiracy theorists,” an unfortunate term that instantly assumes no credibility to those asking what may in fact be legitimate—if uncomfortable—questions.

The speaker of the New York City Council, Melissa Mark-Viverito, a close ally of the mayor, lashed out: “Instead of wasting New Yorkers’ time and hard-earned taxpayer dollars humoring conspiracy theorists with wild fantasies, the City Council will continue to focus on passing sound legislation.”

Walter is very much a creature of the Internet Age. On the heels of Mark-Viverito’s statement, he was quick to put out an “Action Alert” email to his supporters:

Now we and the High-Rise Safety Initiative are calling on you to tell Speaker Melissa Mark-Viverito that there are no wild fantasies here. The only wild fantasy is the one she chooses to believe—namely, that a 47-story skyscraper collapsed symmetrically, at free-fall acceleration, from small isolated fires.

Please take five minutes today to email the Speaker’s office with this message: The only “wild fantasy” is a skyscraper collapsing from fire. Explain to the Speaker and her staff why a 47-story steel-frame skyscraper cannot collapse from fire, and ask them to watch the 15-minute video Solving the Mystery of WTC 7, which features more than a dozen experts, who harbor not wild fantasies, but irrefutable scientific evidence.

If Walter and his group succeed in forcing a serious inquiry into the building collapse, they will have achieved what almost no one else in the 9/11 movement has: transforming a chaotic debate infused with powerful emotions and anger into a sober, methodical exploration of one portion of this sprawling, dark saga.