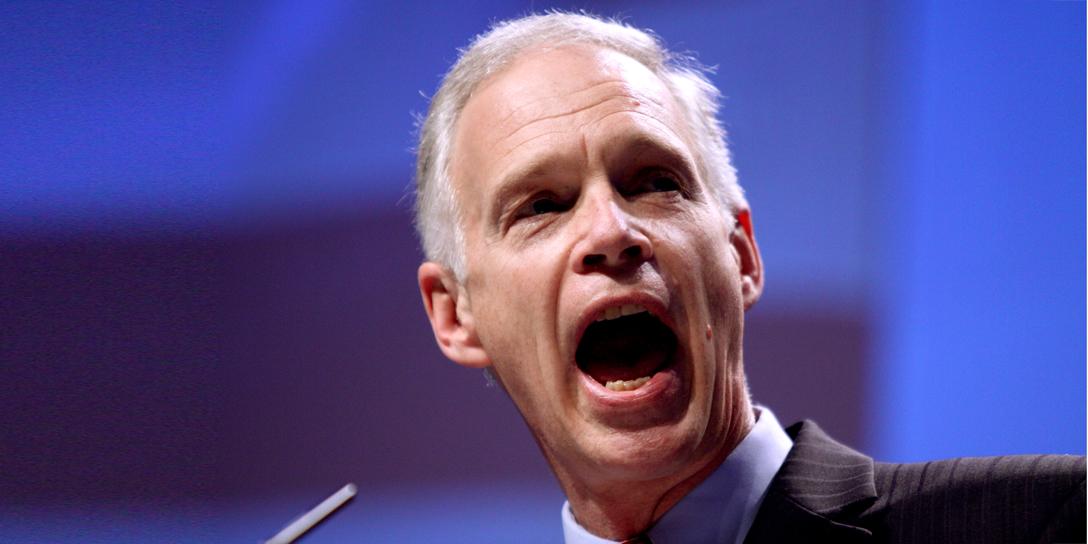 Sen. Ron Johnson (R-WI) has called Snowden on a traitor in one breath, and then praised whistleblowers in the other. Why the double standard? Photo credit: Gage Skidmore / Flickr
Government Integrity

No Love For Snowden

In the past, the chairman of a Senate panel has called Edward Snowden a “traitor,” and just last month, he said Snowden had done “great harm” to US security. Yet this month, that same senator—Ron Johnson (R-WI), chairman of the Senate Committee on Homeland Security and Governmental Affairs—was full of praise for whistleblowers, among whose ranks most people would place Snowden at the very top.

Sen. Johnson reserved his highest praise for four people who testified at length before his panel. At a June 11 hearing, Johnson gushed that these independent spirits and risk-takers “play an invaluable role in rooting out waste, fraud, abuse and mismanagement in the federal government.” And he made it personal by applauding “any whistleblowers who are willing to put their careers at risk and expose themselves to retaliation.”

Johnson’s remarks exemplify the curious double-standard lawmakers and other government officials display toward the ex-NSA contractor, who is now living in forced exile in Russia.

Snowden, Pivotal to Widespread Reform, Remains Beyond the Pale

Recently, a federal appeals court found the National Security Agency’s (NSA) mass phone surveillance program, exposed by Snowden, to be unconstitutional. And Snowden’s revelations played a pivotal role in persuading Congress not to reauthorize key provisions of the Patriot Act. As a result, the new Freedom Act reins in some of the most egregious privacy violations committed under the old legislation, instead settling for a far more modest array of intelligence-gathering measures.

Notwithstanding his historic role, Snowden remains a man on the run, forced to reside in Moscow in order to avoid prosecution and a likely long prison sentence in his native land.

The continuing war on Snowden is a textbook example of whistleblower retaliation—the all-too-common bureaucratic response to unauthorized truth-tellers that Johnson publicly praises—usually. At a minimum Snowden ought to have been invited to testify remotely at Johnson’s hearing. But for Johnson, as for many of his colleagues in Congress, the greatest whistleblower of our time remains beyond the pale.

In a May interview with one of his home-state newspapers, Johnson explained why he opposes any accommodation with the now-31-year-old North Carolina native:

“Our first line of defense is an effective intelligence-gathering capability combined with a robust, continuous monitoring and oversight of our intelligence agencies to make sure we’re not violating Americans’ civil liberties. I think the demagoguery, the revelations of Edward Snowden have done great harm to our ability to gather that information.”

Yet the ringing phrases that Johnson used to describe the estimable but far less impactful whistleblowers he invited to testify at his hearing surely apply to Snowden as well:

“These men and women take great risk to stand up and expose wrongdoing. They sacrifice their careers, their reputations and often their financial security. Congress—and this committee in particular—must support federal whistleblowers and ensure that they are adequately protected from retaliation.”

Among those the committee heard from was a US Army officer who blew the whistle on the military’s dysfunctional hostage-recovery process. Lt. Col. Jason Amerine spoke out after his office was tasked with bringing home Sgt. Bowe Bergdahl, the soldier who walked away from his unit in Afghanistan and was captured by the Taliban. Lt. Col. Jason Amerine was one officer who spoke out regarding the military’s dysfunctional hostage-recovery process, but was not exiled like Snowden. Photo credit: Homeland Security & Governmental Affairs Committee / US Senate

“We informally audited the recovery effort and determined that the reason the effort failed for four years was because our nation lacks an organization that can synchronize the efforts of all our government agencies to get our hostages home,” Amerine testified on June 11. “We also realized that there were civilian hostages in Pakistan that nobody was trying to free so they were added to our mission.”

After trying to work through standard channels, Amerine said he soon realized that the “interagency process for hostages had proven incapable of self-repair and could only be fixed with bipartisanship this nation hasn’t seen lately.” Only when he turned to Rep. Duncan Hunter (R-CA) for support, Amerine said, did things begin to move at the Pentagon.

FBI Lies, and Tries to Disable Probe of Fatal Incompetence

Then, the Federal Bureau of Investigation (FBI) threw a monkey wrench into the process. When Rep. Hunter set up a meeting between Amerine and the FBI to encourage cooperation, the move backfired, according to Amerine. “The meeting appeared to be cordial but the FBI formally complained to the Army that information I was sharing with Rep. Hunter was classified. It was not,” Amerine said. “After my criminal investigation began, the FBI admitted to Rep. Hunter that they had the utmost respect for our work but they had to put me in my place.”

For the FBI, this apparently meant disabling Amerine’s probe of government incompetence. And, in a clumsy effort to do it, they stooped to making the false claim that Hunter shared classified information.

“After I made protected disclosures to Congress, the Army suspended my clearance, removed me from my job, launched a criminal investigation and deleted my retirement orders with a view to court martial me—after I exercised that Constitutional right [to inform Congress],” Amerine testified.

He also told the panel that his security clearance was suspended one day before one of the civilian hostages under his purview, Warren Weinstein, was accidentally killed in a US drone strike.

“We were the only DOD effort actively trying to free the civilian hostages in Pakistan, and the FBI succeeded in ending our efforts the day the dysfunction they sought to protect killed Warren Weinstein,” he testified.

Amerine was one of four federal whistleblowers to appear before Sen. Johnson’s committee. The others testified on waste, concerns over a visa program and overtime abuse at different agencies.

While the committee’s efforts are laudable, legitimate questions arise about Congress’s priorities.

As long as exposing illegal or wasteful activity in government agencies leads to punishing consequences for the whistleblower, Congress must do its part to protect those who take this courageous step.

But virtually everything the senators said about the whistleblowers they praised at the hearing applies to Snowden as well. He tried to go through his superiors and failed to move the bureaucracy. Only then did he share his discoveries with the press. In the process, he exposed secret practices that the courts subsequently deemed illegal and that Congress has taken steps to reform.

Despite this extraordinary sequence of events, it is obvious that those in power are not yet able to recognize the service Snowden has done. He is still vilified as a traitor in many quarters.

There are hints here and there, as in Sen. Johnson’s marginally less inflammatory rhetoric, that public opinion toward Snowden may be shifting. As in the case of Daniel Elllsberg, whose 1971 exposure of the so-called Pentagon Papers revealed some painful truths about US involvement in the Vietnam War, history may yet find Snowden’s unauthorized release of classified information justified. In the meantime, Snowden sits in exile in a country whose government is increasingly hostile toward the US, and new disclosures from the mountain of files he made public continue to ruffle feathers in Washington.