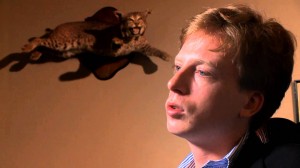 Barrett Brown Sentenced to 5 Years, After Facing More Than a Century A feisty, confrontational journalist who exposed explosive details about the machinations of the national security apparatus and faced more than a century in prison has been sentenced to five years and three months.

For nearly 1,000 days, the 33-year-old writer has been jailed awaiting resolution of a case that stands to set a frightening precedent for free expression in the Internet era.

Brown’s trial mostly revolved around an indictment for sharing a hyperlink in the course of journalistic research—construed by the Department of Justice as trafficking in identity-theft data—and making a series of hyperbolic, rambling threats against an FBI agent on YouTube.

Even during his sentencing, Brown displayed the instinctive defiance that made him an easy target for the authorities. In a statement to the court, he accused the government of lying at length to make their case against him, while acknowledging that he did at times break the law. In referring to how prosecutors flip-flopped over whether he was a journalist, he said:

“What conclusion can one draw from this sort of reasoning other than that you are whatever the FBI finds it convenient for you to be at any given moment. This is not the rule of law, your honor, it is the rule of law enforcement, and it is very dangerous.”

In an interview with WhoWhatWhy from jail, Brown said the FBI had lied in court. He said an agent testified that a) he’d visited the Middle East (he never had) and b) that there was evidence on his laptop that he’d falsely called 911 on someone (He never did.)

“These people, these prosecutors, these FBI agents have blatantly lied so much,” Brown said. “They aren’t rookies; these are people who have been around for a long time. So what that tells me—what that should tell everyone—is that they don’t lie for fun; they do it because it works. And the question is, why does it work? …There doesn’t seem to be any negative feedback to prevent an FBI agent from lying on the stand.”

Before he was arrested in September 2012, Brown published incendiary findings about what private intelligence contractors were doing. His work, still largely ignored by the mainstream media, came before NSA whistleblower Edward Snowden’s revelations made surveillance by the government and its contractors a household topic. Brown’s writings and creation of Project PM, a virtual research syndicate, eventually attracted the FBI’s attention.

In handing down the sentence, U.S. District Judge Sam A. Lindsay said he considered Brown a strategist for the hacktivist network Anonymous. The prosecution said Brown, a self-described anarchist, and Anonymous “secretly plotted the overthrow of the government.”

Brown helped bring Anonymous to widespread attention by demonstrating, via Project PM, what hacktivists and journalists could accomplish together. He showed his audience how to mine business registrations, patent filings and press releases so they, too, could turn Anonymous’s hack-leaks into actionable information.

That, as far as Lindsay was concerned, amounted to a crime when Brown shared a link to a file said to contain credit card data hacked from the servers of private intelligence firm Stratfor. “His involvement in posting that link is more than the defense wants me to believe,” Lindsay said. Although the plea deal did not include a charge for that, prosecutors successfully argued that it was conduct relevant to the determination of Brown’s sentence.

The bulk of Brown’s sentence—four years—came from the threats he made against the FBI agent. Lindsay added a year for Brown’s attempt to shield one of his sources, hacker Jeremy Hammond, and three months for interfering with execution of a search warrant by hiding his laptops.

By the time Brown took his plea deal, prosecutors had already dropped the most severe charges he faced: those relating to identity theft for his sharing, among fellow researchers, the link that the hackers of Stratfor had already posted publicly. That accusation in particular brought sharp criticism from the Committee to Protect Journalists and Reporters Without Borders. They called it a violation of the First Amendment, and Brown’s prosecution payback for his journalism.

Why was the government so concerned with keeping Brown at heel? Prosecutors let one motive slip during a 2013 hearing, as first reported by WhoWhatWhy. At that time, the government made a failed attempt to prevent Brown from criticizing anyone in the government whatsoever while his case was ongoing. For several months, he and his lawyers were even gagged from addressing the public about his case.

At the sentencing, prosecutor Candina Heath denied Brown’s prosecution had anything to do with his politics. He was charged for illegal conduct including “his participation in hacks” and “his disseminating…of credit card data,” she said.

Now sentenced, Brown joins other Internet activists prosecuted by the authorities. Hammond, a source of Brown’s, is currently serving a 10-year prison sentence. That’s despite the fact the FBI encouraged his hacks of Stratfor and foreign governments via a snitch it controlled. Whistleblower Chelsea (formerly Bradley) Manning is serving 35 years after giving classified or otherwise restricted Pentagon and State Department files to WikiLeaks.

That may be the fate of others who try to uncover the kind of corporate and government malfeasance he and others did, Brown said during his interview from jail:

“Not everyone is going to be like Glenn Greenwald, glancing off these blows and going forward. Some people are going to be intimidated. Some people are going to be discredited. And even if they are brave, even if they are willing to go forward, they’re going to be rendered incapable of doing that. Some will be in jail. Some will be in jail on charges that are made up based on evidence that is falsified by companies and the FBI working together. Take that conjunction with them coming after me for being an anarchist, and you have a very dangerous situation here.”

The US is becoming steadily more like the old USSR where dissidents where locked up, often in asylums, or did a term in Sibiria. Now the US, ‘the land of the free’ (more jokes, please) is going down the same lane. And if they don’t like you, there’s always a drone to take you (and ‘collaterals’) out.

It’s clear that the government despises truth and honest journalists who bring this fact to the people’s attention.

Very good, very clear article, thank you. It’s strange for me to read that “being an anarchist” is a reason for the U.S. government to go after someone. It’s a political opinion, not Jihad. Where I live anarchists are a dime a dozen. Why can’t they go after the banksters instead?

The beast will always collapse under its own weight . This will be no exception. When the government destroys the US dollar chasing citizen ghosts while ignoring the real Chinese and Russian threat their land will become easy pickings for foreign invaders

You lost me at Chinese and Russian “threats.” The beginning was ok though.

I wonder if search engines are at risk of the same penalties as Barrett Brown.

America has become the complete opposite of what the founding fathers had in mind. This has been becoming a reality for years, little by little. Anyone who got in the way of this ‘criminal change’, was either thrown in jail on false charges or made to seem a complete ‘nut case’ through the media or simply murdered. No person was safe from ‘false prosecution’, including presidents. Unfortunately, the only people that care enough to bring this to light are beaten down by a very corrupt system. The Constitution and Bill of Rights, mean nothing to the ‘new regimes’ that get in power. This really came to a head after the murder of JFK and has been deteriorating steadily ever since. George Orwell’s 1984 was on the mark but will be a 100% reality unless someone (the American people), rise up and do something about it. Unfortunately, it will be too late very soon. Watch this film and then put on your thinking cap. This has nothing to do with liberal, conservative, religion, race, etc. This is a horror that your children and grandchildren have to look forward too! //…Watch. http://www.solarmovie.is/link/play/1718194/
Orwell Rolls In His Grave 2003