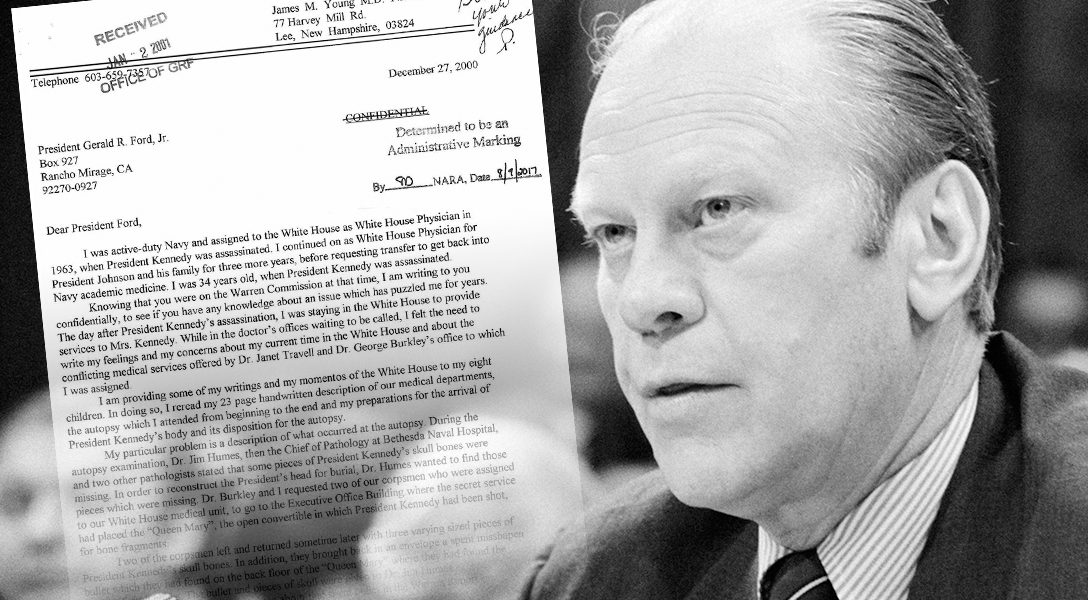 Today, a majority of Americans assume the government lied about the assassination of President John F. Kennedy. New evidence seems to prove they are right.

This is the story of a bullet — a spent, misshapen, but otherwise intact, bullet — that James Young, a Navy doctor, said was found late at night, on the floor, in the back of Kennedy’s limousine. He inspected it himself.

The bullet was found by two chief petty officers who, during the autopsy, were sent to retrieve any skull fragments they could find in the limousine. They came back with three pieces of bone, and the bullet. The skull fragments were reported — but not the bullet.

Years later, when reviewing a memoir he wrote in 1963, Young thought about that bullet, and tried to find some mention of it in the Warren Commission Hearings. To his dismay, he found nothing. In 2000, he wrote to President Gerald Ford to ask him about it. After all, Ford had been on the Warren Commission. But Ford said he knew nothing about it either. In 2001, two Navy historians interviewed Young who gave them a highly detailed account of the events of November 22, 1963, some of which he witnessed personally. And he mentioned the bullet.

Recently, Dr. Randy Robertson, a board member of the Assassination Archives and Research Center (AARC) came upon Young’s papers at a Navy website. This was an exciting discovery.

To understand the significance of this discovery, readers need to know that — according to the official record — only one whole bullet was recovered, the “magic bullet” found on Governor John Connally’s stretcher. And, agents found inside the limousine what is presumed to be two parts of one broken bullet. Numerous very small lead fragments were also found in the limousine, Connally’s wrist, and Kennedy’s brain. If close inspection of the bullet allegedly found in the back of the limousine were to show that it was not fired from Lee Harvey Oswald’s rifle, this would prove to be a threat to the official narrative of a lone assassin. (Please go here for an essay on neutron activation analysis, another test the bullet would have been subjected to.)

Here, Robertson describes in an email to WhoWhatWhy how he came upon this apparently suppressed evidence:

“I was surfing the internet and somehow stumbled upon the Navy Live website. I found the What Price A Rose piece [the memoir] and found it intriguing because although I had heard of Young I never knew he attended the autopsy…”

Robertson is referring to excerpts of the memoir — none of which included the part about the bullet. But he delved further:

“After that it was detective work. I FOIA’ed the transcripts and received them and found out the actions Young had taken to find out what had happened to the bullet he had seen and corroborate what he had told the Navy interviewers. That led me to the Ford Library and the wonderful letter.”

Robertson remains cautious about this discovery since only one witness corroborates Young’s claims — the petty officer who found the bullet.

Below you will find links to Young’s letter to Ford and Ford’s bewildering response, as well as a link to Young’s entire memoir which includes a brief history of other unsuccessful attempts to find out what happened to the bullet.

For the convenience of the reader, I have retyped vital parts of Young’s letter to Ford, and Ford’s response.

I was active-duty Navy and assigned to the White House as White House Physician in 1963, when President Kennedy was assassinated…

Knowing that you were on the Warren Commission at that time, I am writing to you confidentially, to see if you have any knowledge about an issue which has puzzled me for years…

My particular problem is a description of what occurred at the autopsy. During the autopsy examination, Dr. Jim Humes, then the Chief of Pathology at Bethesda Naval Hospital, and two other pathologists stated that some pieces of President Kennedy’s skull bones were missing. In order to reconstruct the President’s head for burial, Dr. Humes wanted to find those pieces which were missing. Dr. Burkley and I requested two of our corpsmen who were assigned to our White House medical unit, to go to the Executive Office Building where the Secret Service had placed the “Queen Mary,” [sic] the open convertible in which President Kennedy had been shot, for bone fragments.

I have never seen anything written about that spent bullet in the Warren Report or elsewhere. Do you recall any testimony or comments which would clarify my concerns?

I appreciate your most interesting letter of December 27th involving the assassination of President Kennedy.

As a member of the Warren Commission I was very conscientious about my participation in the hearings. However, I have no recollection of “the spent bullet” you refer to.

Enclosed [is] a document I sent out to individuals who ask me my current views on the conclusions of the Warren Commission.

There are several excellent books on the assassination which might be helpful.

Both of these books should be in any major public library.

Regarding Young’s memoir and interview, please bear in mind that, although Young describes what he saw with his own eyes, he also includes a great deal of history which he necessarily learned from other sources.