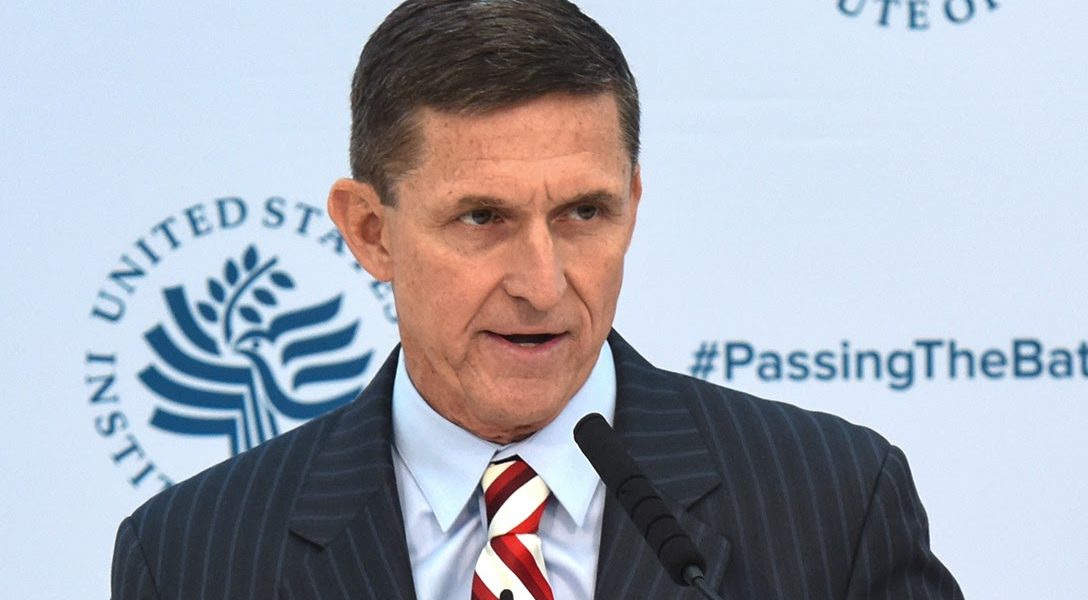 Lt. Gen. Michael Flynn said that he intends to lead the National Security Council under an overarching policy of “peace through strength” during a #PassingTheBatton event at the US Institute of Peace on January 10, 2017. Photo credit: U.S. Institute of Peace / Flickr (CC BY 2.0)
Government Integrity

Michael Flynn’s Pardon, Echoes of Moscow, and Time for a New Start

Donald Trump’s presidential pardon for his former national security advisor, Michael Flynn, is  only the first in what is expected to be a flood of pardons intended to protect Trump’s inner circle from the consequences of illegal behavior.

Flynn’s case is particularly interesting, however. To begin with, there is the question of whether the pardon was really meant to save Flynn or, more likely, to save Trump from lingering suspicions that he won the 2016 election because of help from Moscow.

The specific charges against Flynn relate to his lying to the FBI about clandestine conversations he held with Russia’s ambassador to Washington, Sergey Kislyak, before Trump was inaugurated as president. US intelligence had warned that Moscow was actively interfering in the 2016 election and played a role in getting Trump elected.

President Obama, who had not initially made an issue of the intervention, responded by levying punishing sanctions against Moscow. Flynn’s secret message to the ambassador was that the Russians should not overreact. Things would be different after the inauguration.

“If I had done a tenth of what she did,” Flynn told the crowd, “I would be locked up, too.” In fact, Hillary’s mistake was to send some official emails over a personal server. Flynn had clandestine discussions with a foreign power that saw the US as deadly competition.

Flynn’s telephone call to the Russians, one of several he made, occurred while he was on vacation in the Dominican Republic. It was a flagrant violation of the Logan Act, which makes it illegal for private citizens to engage in diplomacy regarding the United States. But what really did Flynn in was not just the Logan Act (he was technically still a private citizen before the inauguration), but the fact that he lied to the FBI when questioned about making the calls. Flynn foolishly pretended that the calls had never taken place. The FBI already had recordings of the conversations.

By the time he lied to the FBI, Flynn was already regarded by much of the Washington establishment as a loose cannon and a pathetic figure. A former US Army lieutenant general, he had briefly headed the Defense Intelligence Agency before his hasty removal for incompetency. His appeal to Trump was his readiness to join the vocal chorus shouting “Lock her up!” at political rallies.

Republicans had charged that Hillary Clinton should be jailed for her role as secretary of state when Muammar Gaddafi was overthrown in Libya. “If I had done a tenth of what she did,” Flynn told the crowd, “I would be locked up, too.” In fact, Hillary’s mistake was to send some official emails over a personal server. Flynn had clandestine discussions with a foreign power that saw the US as deadly competition.

Apart from blind loyalty, it was hard to understand how or why Flynn had ever been connected to intelligence or even allowed to have a security clearance. He seemed completely oblivious to foreign intelligence efforts to compromise him. After retiring from the army, he accepted a free trip to Moscow, with the tab picked up by Russia’s flashy state-owned television network, RT. He allowed himself to be photographed with Vladimir Putin. He carried on an extensive email dialogue with an attractive graduate student with known connections to the GRU, Russia’s military intelligence branch. He signed his messages affectionately, “General Misha.”

The GRU connection was relevant, because the GRU had been exceptionally active in Ukraine, where Trump’s campaign manager, Paul Manafort, had been hired to use the latest Washington PR tactics to get Moscow’s favored candidate elected. Software used to hack the Ukrainian government’s information had the same signature as software used to break into the US Democratic Party’s servers in order to steal emails concerning the Democrats’ election strategy. These were then distributed for maximum impact via WikiLeaks’s Julian Assange, who, like Flynn, had been invited to Moscow and feted by RT.

If the FBI had not investigated Flynn, knowing that he was about to play a pivotal role in shaping US national security, it would have been remiss in its duties. That said, it seemed pretty clear from the start that Flynn’s lies had probably been intended to shield Trump rather than to cover any active Russian spy efforts by Flynn. After all, Trump’s son-in-law, Jared Kushner, had talked about wanting to open a “back channel” for communications between Trump and Moscow. What the FBI needed to know was whether there was any direct collusion between the Trump campaign and Russian intelligence. Flynn’s artless fumbles provided leverage for probing further into how deep Trump’s connections to Moscow really went.

Flynn confessed to making the calls, which in any case had been recorded, and the Justice Department recommended that in exchange for his cooperation, Flynn not serve any jail time.

Whether the Trump campaign colluded with the Russians on the election remains a moot point, but the fact is that they didn’t need to, and probably were afraid to. The Trump campaign and the men and women selected by Trump to lead his administration were simply too amateurish and too unpredictable to be trusted.

That seemed fair enough. Then, unexpectedly, Flynn fired his lawyers and turned his defense over to Sydney Powell, a fanatical Trump sympathizer who recently accused Georgia’s Republican governor, Brian Kemp, of colluding with former Venezuelan populist leader Hugo Chavez to defraud the Georgia election, despite the fact that Chavez died in 2013. The switch to Powell seemed intended not so much to keep Flynn out of jail — that had already been guaranteed by the Justice Department — as to buttress Trump’s denial that the Russians had played a significant role in getting him elected.

In truth, Trump’s victory in 2016 was the result of a perfect political storm resulting from multiple factors. Vacillation by then-FBI Director James Comey, who kept announcing on-again, off-again investigations into Hillary Clinton’s emails, may have played as big a role as the Russians. Hillary Clinton’s weaknesses as a candidate did not help either.

There is no question that the Russians wanted Trump to win. Vladimir Putin said as much in public. Russia bought extensive pro-Trump advertising under false pretenses on Facebook and Twitter. It engaged a gaggle of young hackers in Moscow to flood US social media with fake messages intended to mobilize the right and stir visceral hatred against liberals. Russia might have abandoned communism, but it still had expansionist dreams. It had run up against the Obama administration in Syria, where Russia had combined with Iran to seize effective control and open a port on the Mediterranean that would enhance its leverage over western Europe.

Russia didn’t need to destroy the United States outright, but it did want to knock its main adversary down a peg or two, end the labelling of the US president as “leader of the free world,” and challenge what it saw as the myth of America as the “home of the free and the brave.”

To a great extent, Trump delivered on all of that. He trashed America’s relations with its key Western allies, applauded Moscow, and shook faith in the international system that the US had put together over more than half a century following World War II.

Whether the Trump campaign colluded with the Russians on the election remains a moot point, but the fact is that they didn’t need to and probably were afraid to. The Trump campaign and the men and women selected by Trump to lead his administration were simply too amateurish and too unpredictable to be trusted. Jared Kushner’s suggestion that Trump needed a communications back channel to Moscow that would bypass US intelligence was dismissed by Russia’s ambassador, Sergey Kysliak. It sounded too much like a trap.

It is clear from FBI investigations that the Russians explored developing Trump staffers as possible assets, but in the end they didn’t need to. The administration, in short, did the job without being asked. It leaked classified information like a sieve. In spite of that, America’s national security seemed to hold pretty well without any catastrophic setbacks.

Taking that into account, continuing to prosecute Michael Flynn would seem like a waste of time and energy. Flynn has already pretty much destroyed himself. Let him disappear back into the woodwork like countless other reprehensible characters before him.

As for the Russians, several years ago I attended an international conference in central Europe which had been convened to debate why global governance did not seem to be working. A Russian delegate stood before the group and proudly proclaimed, “At least we don’t pretend to be a democracy.” The implication was that the US pretends quite often, but falls short. If the exhausting experience of the 2020 election has proved anything, it is that the American system is both surprisingly democratic and extraordinarily resilient, even when subjected to what amounts to a rigorous stress test.

Life under Trump has not been easy, but it has succeeded in demolishing a number of myths. If Europe feels that it can no longer confidently depend on the US to protect it from foreign aggression, that may be a healthy development — both for Europe and the United States. The international institutions which Trump trashed have needed to be updated or reinvented for some time. Why do Great Britain and France have permanent seats on the UN Security Council while India  — which, like China, has a fifth of the world’s population — does not? The financial institutions created by the US — the World Bank and the International Monetary Fund — are heavily weighted towards European influence, while input from emerging economies, such as Brazil, Argentina, and China, is largely ignored. The US campaigned ferociously for open markets through the World Trade Organization, yet backed away when the commercial advantages of globalization began favoring emerging markets at the cost of US jobs.

There is an argument that the US became the world’s dominant superpower not because it is exceptional, but because of an accident of history — Europe’s destruction in World War II. It was inevitable that Europe would eventually return as a powerful force to be reckoned with. By 1980 the combined GDP of France and West Germany surpassed that of the then-Soviet Union, even though neither France nor Germany had Russia’s natural resources. Today, the European Union dwarfs the United States as a preferred market. It is more comfortable in the current environment not to see the US as the world’s sole superpower, but rather as ‘“first among equals.” In this new world, we need to listen as well as command. The realization of that new reality may be Trump’s ultimate, unintentional gift to history.

Both Trump and COVID-19 have given us a period of unprecedented disruption and chaos, but they’ve also given us a moment to reflect on where we are actually headed. Trump’s behavior has been despicable, but it has also ripped the scabs from the wounds of latent American racism, inequality, and injustice which have long kept the US from being all that it can be. We are a fifth of the way through the 21st Century, but until now, we have been largely living by the shoot-em-up rules of the 19th Century. In that context, a pardon for Michael Flynn is largely irrelevant, a passing distraction in a new era that has more important concerns.

On January 20, Trump will be gone and, one can hope, forgotten. What he has managed to give us in spite of his worst intentions, however, is a chance for a fresh start. Let’s not blow it.