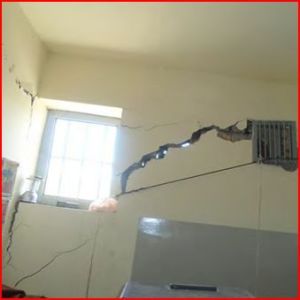 Jailbreak: The U.S. Paid $11 Million for an Afghan Prison with Cracked Walls Tear Down This Wall: $11.3 million Baghlan Prison with Massive Cracks

Want to know what $11.3 million buys the U.S. taxpayer in Afghanistan?

In one case, a prison complex with a missing security fence, one ruined building and cracking walls.

Those are the findings of the Special Inspector General for Afghanistan Reconstruction, the Congressionally-mandated watchdog with oversight of the roughly $103.2 billion of federal funds spent — so far — on rebuilding Afghanistan. As WhoWhatWhy reported last week, the US government plans to spend $20 billion a year on Afghanistan even after withdrawing combat troops.

Here, we take a closer look at a fraction of that spending through the case of the Baghlan prison, a project under the State Department’s Bureau of International Narcotics and Law Enforcement Affairs.

If you haven’t heard of the bureau, it’s the State Department unit responsible for developing American policy to fight international crime and drug syndicates. Afghanistan is responsible for 80 percent of the opiate production in the world, according to the State Department. So the US decided Afghanistan merits a special program to build the tools for an American-style war on drugs there. One of two Baghlan prison buildings that’s going to have to be rebuilt.

The Baghlan prison falls under two of the bureau’s “focus areas”: counter-narcotics and fighting crime and corruption. Afghanistan is short on prison space, and the State Department decided to fix that by developing “a safe, secure, and humane Afghan corrections system.” The prison in Baghlan province, located north of Kabul, is supposed to be part of that solution.

Building prisons in Afghanistan isn’t like building them in Kansas, because of the kind of prisoners and the kind of weapons their friends on the outside have, a fact the State Department noted:

That translates to a high jailbreak risk. So Baghlan should have been built like an Afghan Alcatraz.

Besides suffering the violence that wracks most of the country, Baghlan has two other problems: It’s prone to flooding and located in the second-most active earthquake zone in Afghanistan, according to the Special Inspector General’s report. The building plans had problems almost from the start, and that’s before the corruption and incompetence began.

•   The ground settled underneath three buildings, creating wide cracks and damaging structural beams. One had to be demolished, and two more will have to be rebuilt.

•   None of the designs took into account the fact the prison site was on a flood plain, resulting in an additional $170,000 drainage modification that’s still not built.

•   The State Department missed a “significant design and construction error,” the use of unreinforced concrete and bricks—not difficult for prisoners to destroy. That’s to say nothing of the vulnerability to earthquakes.

•   The original contract included a security fence and a storm water drainage system. The contractor never built either but invoiced the State Department for both and was paid $170,400.

•   The diesel generators that power the site are broken, and the sewer system is clogged because the Afghan government hasn’t carried out any maintenance.

•   The State Department admitted it failed to retain the standard 10 percent of the total contract, a reserve that’s kept in case the contractor doesn’t perform. So far, it’s only recovered about $250,000 of the nearly $1.1 million it should be holding. Flooding at the prison in April, 2012. Courtesy SIGAR.

But what’s the fate of the prison, and the 777 prisoners inside a facility built for 495? It’s still a disaster waiting to happen, according to the Special Inspector General.

We remain concerned about the use of unreinforced masonry at Baghlan prison. Rebuilding structures without steel-reinforced masonry walls between adequately constructed concrete columns can lead to collapse in areas prone to earthquakes … Furthermore, we believe the risk of prisoner escape is increased if this construction error is repeated because prisoners could more easily break down unreinforced walls.

Notwithstanding all those problems, the self-same Omran Holding Grouphas won an additional $8 million this year from the US embassy in Kabul to build media information centers at universities in Nangarhar and Balkh. Of course, that’s a mere fraction of the $4 billion the State Department spent in Afghanistan from 2002-2013, 69 percent of which went to U.S. private military contractor DynCorp International.

DynCorp, too, faced accusations of poor construction in Afghanistan by the Special Inspector General, but won a $73 million settlement from the U.S. Army Corps of Engineers and lived to build another day.

These stunning failures of accountability have generated almost no discussion at all in Washington or the US media. Given all the talk about cutting government waste, one has to wonder why.

Correction: The article as originally posted said there was no security fence. It has been corrected to state that a required security fence hasn’t been built.